Today, "Made in Detroit" is a label in search of a story 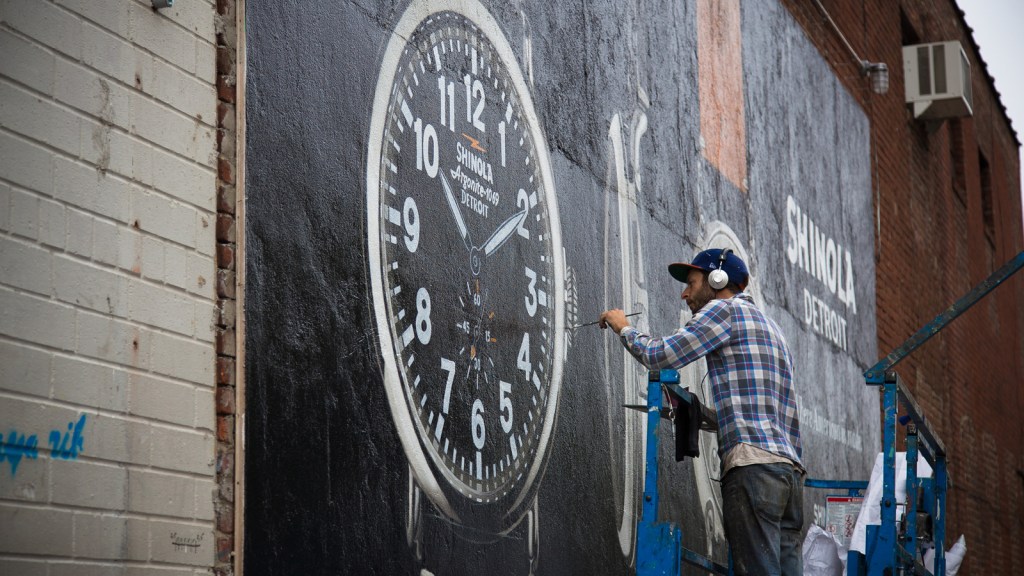 Today, “Made in Detroit” is a label in search of a story

I am never going to leave this building. This day began with a promise of a tour of small-scale manufacturing and design in Detroit, but there is a bait-and-switch in progress, in that myself and 30 other people curious about the future of Detroit are actually just wandering up and down the 12 floors of one building — a hybrid dormitory/conference center/design school/business incubator. It does have a very nice industrial paint facility. But as we move around I am beginning to get the feeling that this building, and the idea of manufacturing in Detroit, have more to do with our fantasies about Detroit than with the actual business of making stuff.

The building that I am touring is currently known as the A. Alfred Taubman Center for Design Education, after the shopping mall developer, former Sotheby’s owner, and onetime jailbird who donated the money to have it renovated. In an earlier life it was called the Argonaut Building, after the group of men in Greek mythology who quested for the golden fleece. When it had that name, it was a research laboratory for General Motors. It’s in the National Registry of Historic Places for many reasons, one being that the first mass-produced automatic transmission was developed there.

In 2007, General Motors, which had abandoned the building nearly a decade earlier, donated it to a local art and design school called the Center for Creative Studies (CCS). I’m here today with other participants in the urban planning conference “Meeting of the Minds” because this is a poster child for effusive articles about a manufacturing renaissance that is happening in the city of Detroit. Right now I’m having to squint hard to see it. So far, the one product developed in this new incarnation that keeps getting cited is a patient gown with superior butt coverage, developed for the Henry Ford Hospital.

The Center for Creative Studies is even older than General Motors. It was founded in 1906, when it was known as the Art School of the Detroit Society of Arts and Crafts. The school was one of many being created at that time by acolytes of the Arts and Crafts movement, which felt that industrialization and manufacturing were whittling away our ability to just look into the world and make stuff out of it.

Many Arts and Crafts schools maintained a bulwark against mass manufacturing for a long time; my favorite art history professor attended one in the ’50s and wasn’t allowed to graduate until he built an entire loom from scratch. But the Detroit Society of Arts and Crafts saw the writing on the wall pretty early in the game: In 1933, it voted to recognize the automobile as an art form, and added industrial design to the curriculum.

Could its leaders have anticipated the point when manufacturing itself would seem like a quaint thing of the past? Probably. Anyone who lived through the first decade of the 20th century was used to things changing, and changing quickly. In any city, colleges are among the least mobile of institutions, and so CCS has spent the last 50 years struggling to run a design school in a place that has fewer and fewer jobs for designers, while charging higher and higher tuition (the current tally is $38,000 a year, not counting room and board).

Many other schools have reacted to this by running small-business incubators as part of the curriculum. CCS has gone one step further by actually renting out the entire fifth floor of the Taubman building to Shinola, a high-end accessories company run by Tom Kartsotis, founder of Fossil watches. The story that we are told on the tour is that Shinola makes bicycles, watches, and key fobs in Detroit, but the story that I remember from working on an earlier article is that Kartsotis moved the business here because the term “Made in Detroit” isn’t subject to the same legal constraints as a term like “Made in America.” Most of what Shinola sells is assembled in Detroit out of components made in other countries.

Indeed, while there is an entire glassed-in showroom of a manufacturing space on the fifth floor, there are only a few men in hair nets and white lab coats wandering through it desultorily. “Maybe it’s a slow day,” I think, and wonder what the factories where the components are actually built look like. This is not a new story — a lot of things that claim to be made in Detroit don’t really hold up to scrutiny.

When I was a teenager, my dad gave me a stack of his old work shirts. “I noticed you kids are wearing these,” he said. “I certainly don’t need them any more.” He was right. The tool and die shops had stopped calling with offers for work, and closets were being cleaned out across the metro area. Right then every vintage shop was full of the old uniforms of middle-class factory life, from the practical, easy-to-launder cotton/poly blend work shirt with oval-shaped name tag to the fantastically more elaborate creations that signified membership in one of Metro Detroit’s many competitive bowling leagues.

I didn’t know how to feel about this. On the one hand, I wanted to be cool as much as anyone. On the other hand, it felt creepy to walk around in the uniform from my dad’s dead job.

Detroit has many futures ahead of it. Dan Gilbert sees it as a tech incubator and real estate empire. Grace Lee Boggs sees it as a model city for a post-industrial agrarian economy. Manufacturing may be a part of that, though the substantial rise in jobs that boosters are citing doesn’t come close to replacing what was lost in the massive layoffs of the last 20 years.

Detroit was once a convenient place for designing and making things because it was the place where the raw materials for manufacturing — trees and metal from the forests and mines up north — met the coal and steel from the southeast. This particular kind of industry was hard — hard on land and hard on people. Its economic successes were, in many ways, due to not calculating the environmental cost that came with it. Right now, the idea of Detroit’s manufacturing resurgence reminds me of the dilemma of my father’s shirts: It feels like putting on someone else’s clothes without acknowledging the story behind them.