On Wednesday, Chinese lawmakers approved the country’s 13th Five-Year Plan, the high-level document that will guide policymaking through 2020, including the country’s approach to climate and energy policy. As the world’s second-largest economy and the largest emitter of greenhouse gases, China necessarily plays a role in shaping global climate policy — and if it can deliver on the goals outlined in the plan, that role will undoubtedly expand.

The plan is the first to set a national cap on energy consumption — 5 billion tons of standard coal equivalent for 2020 — as well as offering new visions for energy efficiency and air pollution. A World Resources Institute analysis concluded that this FYP sets China on a path to a 48 percent reduction in carbon intensity levels by 2020, compared to 2005 levels. (Carbon intensity refers to the ratio of CO2 emissions to GDP.) For reference, China’s pledge to the Paris Agreement has the country slashing carbon intensity by 60-65 percent of 2005 levels by 2030.

All told, it’s the “greenest Five-Year Plan that China has ever produced,” said Barbara Finamore, director of NRDC’s Asia program, on a press call. 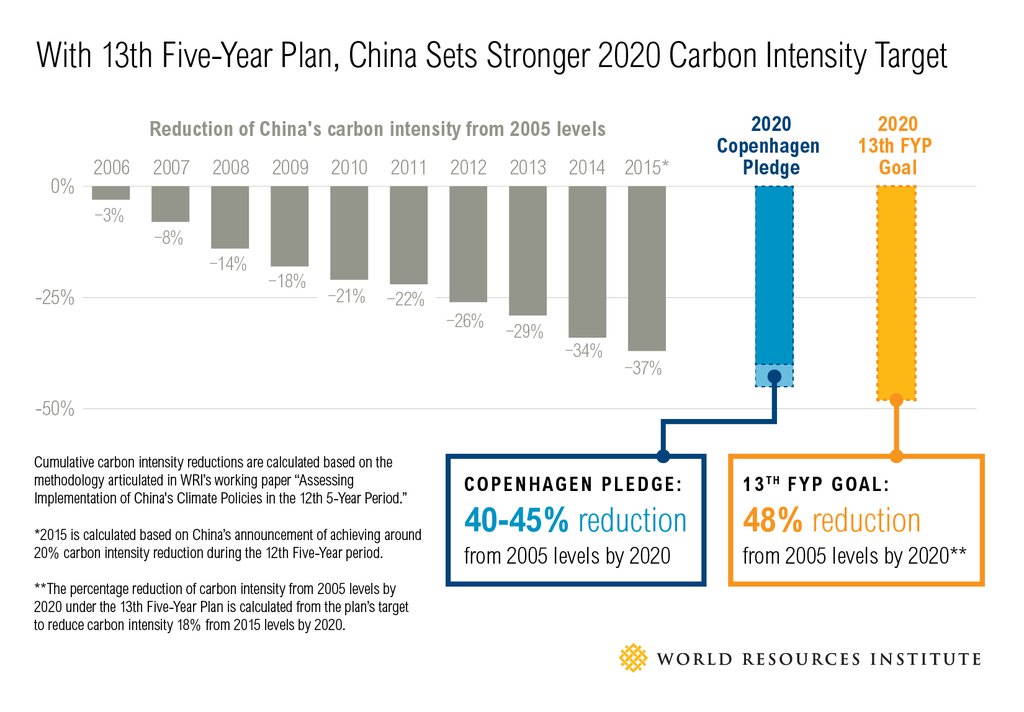 There’s a lot more to the FYP than energy policy, but many of the other pieces are complementary when it comes to the climate. New standards on air quality indicators like PM 2.5, for example, will no doubt rein in the country’s rampant coal burning.

But it’s not all about coal, either. While China saw a cut in coal use of around 3 percent in 2015, it increased its oil consumption by 5.6 percent in the same year. “If China is going to peak its CO2 emissions, it cannot just rely on [cutting] coal,” said Finamore. “Transportation emissions and oil consumption are going to be exceedingly important.” And they are: The FYP addresses vehicle emissions and public transportation in cities, in addition to allocating new money to high-speed rail initiatives.

It’s easy to raise questions about China’s ability to follow through on these kinds of ambitious plans in the face of slowing economic growth. The FYP outlines a target GDP growth rate of 6.5 percent through 2020 — speedy by global standards, but a far cry from the 10 percent growth rate of yesteryear.

But that’s not the right way to think about it, said Paul Joffe, senior foreign policy counsel at WRI. “China envisions a ‘new normal’ level of growth,” explained Joffe to press. “At that level, they view the economic and environmental targets as entirely compatible.” In other words, anyone wildly gesticulating at China’s flagging growth rate needs to take a chill pill. Ten percent is simply not sustainable.

Joffe’s description of coinciding economic and environmental goals bucks the conventional economic logic that says “you need to consume more to grow more,” said Kate Gordon, a vice chair at the Paulson Institute. That logic is faltering. Earlier this week, the International Energy Agency released data suggesting energy-related emissions and global GDP growth are decoupling. Indeed, Gordon argues that China’s energy-efficiency savings have in part allowed for that kind of decoupling. As the economy transitions to a larger focus on services — which the FYP has growing from 50.5 to 56 percent of the Chinese economy by 2020 — and a lesser emphasis on industry, the split between GDP growth and emission trends becomes even more apparent.

A reasonably glaring omission in China’s FYP is the lack of an explicit goal for new renewable energy installed, though it’s conceivable that new goals for solar and wind capacity could find their way into the sub-plans that will be released over the coming months. Existing targets include 150GW of new solar capacity and 250GW of wind by 2020. Of course, it’s also not just about capacity, said Gordon. You’ve also got to get that electricity on the grid. In its Paris Agreement pledge, China committed to raising its share of renewables to 20 percent of its energy mix by 2030.

The plan’s ambition gives post-Paris climate-action further momentum, and can only serve to strengthen the recent U.S.-China climate pact. As with all ambitious plans, though, implementation will be key — and the country is outlining some stark transitions. Upwards of 1.8 million workers in the coal and steel industries are expected to lose their jobs due to changes outlined in the FYP, and those workers will need to be retrained and reemployed. Truly delivering on those goals will require an unprecedented degree of foresight and coordination.

Or to put it in Finamore’s own words: “It’s going to be tough.”