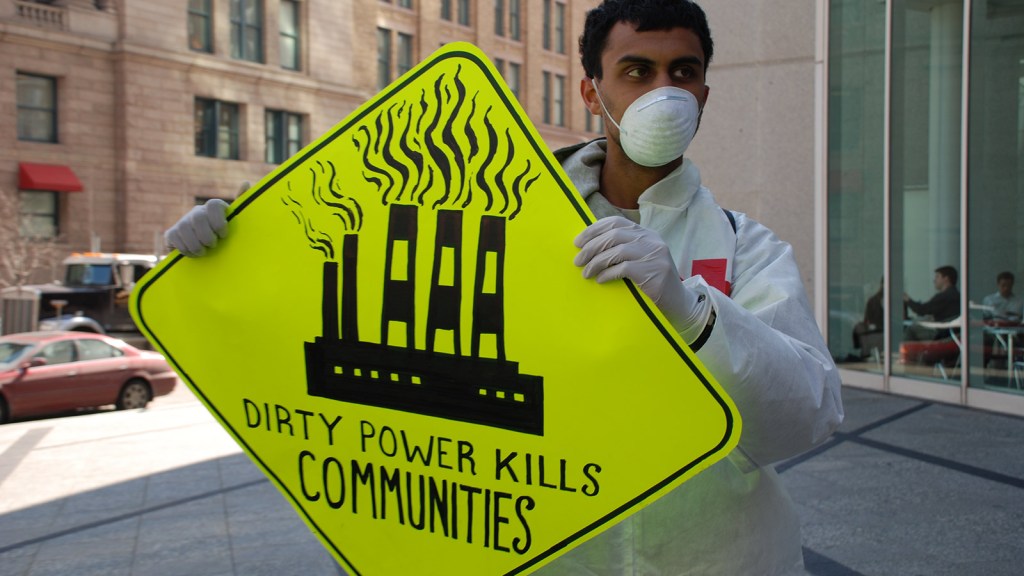 It’s not often that environmentalists are in the position of defending the government. Usually they’re trying to stop something bad — a pipeline, a terminal for exporting coal or liquefied natural gas — rather than cheering on something good. The defensive playbook is well-established. Offense is a little more tricky, especially when the plan you’re promoting isn’t even as strong as you want it to be.

But that’s the position green groups are in with the Obama administration’s proposal for regulating carbon emissions from existing power plants under the Clean Air Act. The EPA’s emission-reduction targets fall a little bit short of what environmentalists hoped for, and well short of what is technologically feasible and what will ultimately be needed to actually avert climate catastrophe. But Republican politicians, conservative activists, the coal lobby, and some coal-state Democrats are already attacking the proposal. So environmentalists are speaking up in support of the rules (and will call for them to be strengthened), lest the EPA only hear criticism during the 120-day public-comment period and the rest of the year before the rules are finalized.

Environmentalists have an advantage over their conservative opponents: The public agrees with them. Several recent polls have found public support running roughly 2-to-1 in favor of regulating CO2 from power plants, even if it means higher electricity prices.

National numbers can fail to capture the politics of coal-heavy swing states. Conservative groups and the coal lobby are targeting their pitches in states that produce coal or rely heavily on it for power, and saying it will not just raise electricity prices but lead to job losses.

But the League of Conservation Voters released a poll Thursday suggesting that there’s strong support for the rules even in these states. The poll surveyed voters in Virginia and Pennsylvania, two battleground states that both produce coal and use a fair amount of it for electricity, and it offered all the common arguments against the rules, but it still found that voters support the regulations by the same 2-to-1 margin. And it found that voters overwhelmingly believe the rules would create more jobs in clean energy than they would eliminate in the fossil-fuel economy. “I’d much rather be in our shoes than theirs,” said Bill Burton, a senior advisor to LCV and former Obama press secretary on a call with reporters Thursday, referring to the proposal’s opponents.

So environmentalists don’t have to build up a constituency for the rules, they just have to mobilize supporters. Groups with a large grassroots membership, such as the Sierra Club, are planning to ask their members to submit public comments to the EPA.

After years of fighting political battles, the Sierra Club, which has more than 2 million members, has built up an infrastructure that resembles the voter-turnout efforts of a presidential campaign, with field offices, phone banking, and tabling. “We’re going to aim high and try to generate millions of comments,” says Melinda Pierce, the Sierra Club’s legislative director. “Email is not going to turn out a body, we have found; you have to follow up with phone calls. We have field organizers, but they also bring in volunteers for phone banks and that’s generally how we get bodies to come out. We have our folks go out and table and collect postcards at county fairs and shopping malls.” They will use these same tactics at the state level to lobby members of Congress, state legislators and officials, and public utilities to support the rules.

Environmentalists will be getting a big assist from the public health community. The American Lung Association, which sends regular communications to more than 14 million people, has been active in supporting these rules because of the health benefits of cleaner air. Says Paul Billings, the group’s senior vice president for advocacy, “We’ll file detailed technical comments, and file public comments from doctors, nurses, caregivers, people with lung disease, parents of kids with asthma.”

Groups like the Sierra Club will also submit more detailed expert comments meant to actually guide the EPA’s thinking on what is technically feasible. The more wonky groups like the Natural Resources Defense Council and Earthjustice will focus primarily on this, while also churning out press releases and blog posts to make sure conservative claims are rebutted in the media.

But green groups have to strike a delicate balance in figuring out exactly what to encourage their members and supporters to say. All of the big environmental organizations put out statements on Monday praising the rules, but many are actually underwhelmed by the targets EPA has set. The agency has proposed to establish rates of allowable CO2 emissions per megawatt-hour of electricity produced, rather than a hard cap on total CO2. That means EPA’s projections of reductions in CO2 emissions — from 2005 levels, cuts of 26 or 27 percent by 2020 and 30 percent by 2030 — are estimates, not precise guarantees.

Environmentalists are generally inclined to accept that EPA’s more flexible approach will stand a better chance of passing legal review. But they would at least like to see more ambitious targets. While they have broadly similar goals, the groups don’t yet have a unified message on what the targets should be. They are trying to craft the optimal policy under a little-used provision of a very complex law, each sorting through what it might mean to have different targets for different years in different states using different projections. Conservatives, on the other hand, with their contempt for activist government, can be easily united around an identical message: just say no.

EPA’s current goals are not as impressive as they may seem on first glance. Emissions have already dropped more than 13 percent since 2005, meaning we are already halfway to the 2020 goal without any rule at all. In fact, some states such as California that are already limiting their emissions may get targets from the EPA that are weaker than what they’re already poised to achieve on their own.

NRDC, which last year proposed a policy model similar to the one EPA is adopting, wants reductions of at least 35 percent below 2005 levels by 2020, and bigger targets later in the decade. In its 2013 proposal, NRDC suggested only setting limits through 2025 because technological development between now and then could make an even tougher target achievable by 2030.

The Sierra Club has roughly the same idea as NRDC, as does Earthjustice. “We are very supportive of this proposal because we think EPA could use it to finalize a rule that could make meaningful cuts,” says Abbie Dillen, Earthjustice’s head of litigation for climate and energy. “That’s not to say EPA couldn’t do more than what it has put out. We have put out a target — based on the president’s own Climate Action Plan of an economy-wide reduction — that would require cuts in the electric sector of 35 percent to 40 percent by 2020 from 2005 levels. We think that’s doable and we can do even more, but that’s the minimum.”

Some will argue for going further, on the ironic grounds that even the rules’ critics acknowledge it is possible. Last week, the Chamber of Commerce published a report bashing the rules ahead of their release, assuming that EPA would call for a 42 percent reduction from 2005 levels by 2030. The report found that would reduce U.S. GDP growth by 0.2 percent annually. Conservative pressure groups and media outlets eagerly cited it. Its point was to scare Americans into opposing the rules. But that isn’t actually a huge amount to pay for helping to avert climate catastrophe. In fact, if you consider the savings associated with reduced global warming and the growth in the clean energy sector, even that modest drag on GDP might not come to pass.

In a clever bit of jujitsu, Tyson Slocum, director of Public Citizen’s energy program, says, “The chamber thinks you can achieve a 42 percent reduction. The chamber didn’t say a 42 percent reduction is not technically feasible. They think it comes at a high cost. But that should be the starting point, and then states figure out how to do it without causing the economic disruption the chamber predicts.”

But while environmentalists and public health advocates will push for a stronger rule, they’re not likely to get it. Generally speaking, regulatory agencies propose a rule and then it gets weakened before it’s ultimately adopted, after the entrenched business interests and the politicians in their thrall complain about it. “I looked, and I couldn’t find a single example of a past [environmental] rule getting stronger [during that process] rather than weaker,” says Sierra Club Executive Director Michael Brune. Nonetheless, he vows, they will try.

One potentially powerful force may be largely on the sidelines in this particular fight: the most assertive and grassroots wing of the environmental movement. Organizations such as Greenpeace USA, for example, are not planning on being deeply engaged in efforts to support the EPA’s rules.

Some critics, such as New York magazine’s Jonathan Chait, have argued that the environmental movement has erred in focusing on stopping the Keystone XL pipeline rather than on demanding the strongest possible EPA regulations. Some might see the rules’ tepid targets as proof of his point. (Chait himself, though, has enthusiastically praised the rules, arguing, plausibly, that Obama had to make them as soft as he did to maximize his chances of passing muster with right-wing judges who might otherwise overturn them.)

The groups most focused on Keystone, such as Bill McKibben’s 350.org and Tom Steyer’s NextGen Climate, issued statements praising the proposal on Monday. But they appear not to have any plans to make agitating for strong regulations a central focus this year.

These groups say they have raised awareness and heightened urgency about climate change more generally. “From our perspective, we think that the organizing that has happened the last few years around Keystone has opened space for the rules to be politically palatable,” says Jason Kowalski, policy director at 350.org. “It has allowed the administration to say, ‘People are in the street because they agree with us on climate change.’”

David Pomerantz, a spokesperson for Greenpeace, says, “I don’t think we really see our role as being to make sure that we go all out, with every priority being that the rule gets every last drop of support. We’re trying to create the right political conditions to put out the best rules possible, and [make sure] that they’re successful.”

If “political conditions” means public opinion, then the polls suggest that activists have helped build public support for climate action. But plenty of popular ideas, from cap-and-trade to gun control, have died in Washington, D.C. Building popular support is just the beginning of changing American policy, not the end.