Fuel economy is hardwired into the airline industry’s DNA. After all, fuel costs money, and using less of the stuff is an easy way to beef up the bottom line. Well … maybe not easy, but certainly worth doing. Saving fuel, by reducing carbon emissions, can help save the planet. And those cuts could come at little to no cost to the companies themselves.

At least, that’s what a bunch of researchers in the U.K. think. They estimate — in a new paper published today in Nature Climate Change — that airlines can cut emissions in half by the year 2050. Those savings would come in the form of things like new aircraft designs, fuel formulations, and flight patterns. And crazy as it may sound, all those switches could come for free, or pretty close to it.

Commercial air travel accounts for about 2 to 3 percent of the world’s CO2 emissions. “If you compare that to the emissions of entire countries, that’s about the same as Germany,” says Andreas Schaefer, an energy and transportation researcher at the University College of London Energy Institute and coauthor of the paper.

And unlike most other industries, every iota of carbon emitted shows up automatically on an airline’s bottom line. “In our industry, emissions are closely linked to fuel, and fuel is life,” Richard Aboulafia, an airline industry analyst. “In other words, we’re the best self-disciplining industry on the planet.” For instance, a single airplane consumes up to 3 million* gallons of fuel per year. At roughly $3 per gallon, you’re looking at $10 million a year in fuel costs. A single percent improvement in fuel efficiency can save an operator hundreds of thousands of dollars. Multiply this over a fleet of planes, and you can see why efficiency is so important.

The data backs this up. Between 1970 and 1980, fuel economy (and therefore emissions) dropped by 5 percent every year. Since then, emissions reductions have leveled out to about 2 percent per year.

But those gains are going to disappear once the poor (but getting richer!) parts of the world start flying like the rich world. Currently, flights to and from industrialized countries are projected to increase at a rate of about 2 percent per year. “In the developing world, the growth rates are significantly higher, up to 7 or 8 percent,” says Shaefer. It doesn’t take too much math smarts to see that the developed plus developing world flight rates are going to overtake whatever emissions cuts the industry comes up with on its current path. 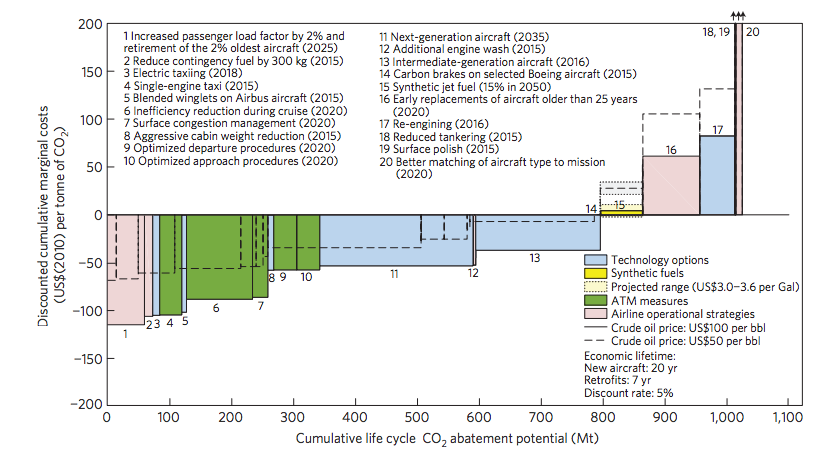 The X axis shows the volume of CO2 each emissions mitigation strategy would remove from the commercial airline industry. The Y axis shows how much each would save (or cost).Andreas Shaefer et al. / Nature

Check out this great chart. It outlines the paper’s major finding — 21 emissions cuts identified by the authors and ranked in terms of efficiency and cost. It’s pretty easy to see that things like removing old aircraft and increasing passenger loads are great ways to get better fuel economy. About 75 percent of commercial airline emissions come from mid-size planes, like the Boeing 737, so it makes a lot of sense that some of the best values come from new plane models in that class, like the Airbus A320 NEO or Boeing’s 737 MAX.

In the most balanced scenario of bundled emissions cuts, the authors estimate that the industry could halve its emissions by the year 2050 (based on 2012 emissions). And over the lifespan of an airplane (about 20 years), those cuts will pay for themselves.

If, that is, the market will bear it. The airline industry’s self-policing is contingent on global fuel prices. “These emissions cuts pay for themselves when oil is selling at $50 to $100 per barrel,” says Shaefer. If fuel prices dip lower, then it’s cheaper for the airlines to fly the planes with fuel-inefficient designs. Currently, a barrel of oil is going for about $40 to $45. And not many economists predict that value to rise. Ruh roh.

High oil prices are also the necessary economic spur for one of the most emissions-cutting technologies: synthetic fuels from biomass. But developing biomass fuels — which includes things like algae — are research intensive. “Common sense will tell you if we have $40-a-barrel oil, some shine goes from these fixes,” says Aboulafia. That’s a bit of an understatement. In order for vats of combustible algae to have any shine at all, oil prices need to reach at least $100 a barrel.

But the airline industry is on track to make many of these cuts already. Both the Airbus A320 NEO and the Boeing 737 MAX will soon enter the market, and an airline would be foolish not to start replacing its fleet with one or the other. Some looming EPA regulations could spur the industry into further self-regulation, but there’s no telling if even the threat of government bureaucracy is enough to make up the economic gap between efficient planes and cheap gas.

*Correction: An earlier version of this story said the average plane consumes 3 billion gallons of fuel per year. That was incorrect.

China is totally crushing the U.S. on renewable energy