Here’s why we need to politicize disasters 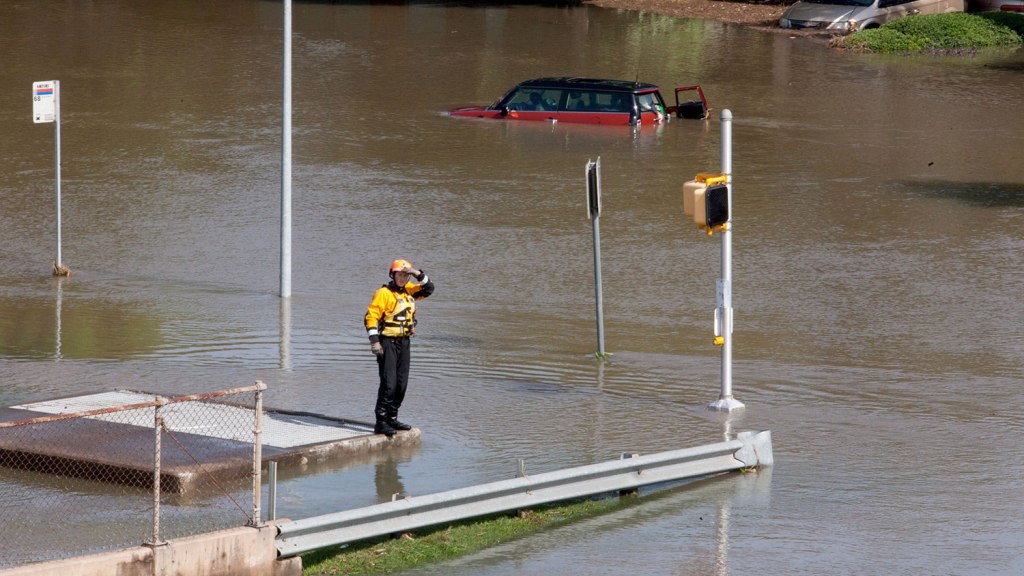 Here’s why we need to politicize disasters

The past week has brought widespread devastation throughout Texas, as torrential rain and tornadoes have ripped through a wide swath of the state. Severe weather has killed at least 24 people in Texas and Oklahoma since last weekend, and another 14 remain missing, as floodwaters swept up residents and carried them miles downstream.

The scale of the disaster is historic. Last Monday, an inch of rain fell on Houston in just five minutes, while 95 percent of the state — along with parts of Arkansas, Kansas, Louisiana, Missouri, and Oklahoma — was under a flash flood warning at one point. So much rain has fallen during the past month — 35 trillion gallons, according to the National Weather Service — that it could cover the entire state of Texas in a pool of water eight inches deep. The continued inundation has even brought an end to the state’s four-year-long drought.

As is the case with most weather-related disasters in the U.S. these days, a number of observers have begun to ask: What role, if any, did climate change play in this disaster?

This seems like a reasonable question, given that we know climate change will most prominently make itself felt through extreme weather and by affecting the hydrological cycle. And the evidence would seem to support the notion that climate change did play some role. John Nielsen-Gammon, the state climatologist, told The Texas Tribune that overall precipitation has increased 7–10 percent statewide over the past century, while two-day heavy rainstorms have become nearly twice as common. And according to a Climate Central analysis, four Texas cities rank among the top 50 for the biggest increase in the number of heavy downpours over the past 50 years. Houston and Austin, which have been at the heart of this month’s flooding, have seen 167 percent and 67 percent increases, respectively.

Unsurprisingly, not everyone has responded well to the attempts to link the floods to climate change. At a press conference this week, Texas senator and GOP presidential candidate Ted Cruz, who has a long history of casting aspersions on climate change science, said, “At a time of tragedy, I think it’s wrong to try to politicize a natural disaster. And so there’s plenty of time to talk about other issues. I think the focus now is on caring for those who have lost their lives and lost their homes.”

According to Cruz, there’s a time and a place for people to talk about climate change and disasters, but that is sometime in the future. That seems like a reasonable assertion, right?

Wrong. What Cruz and countless other individuals who decry politicizing disasters don’t understand is that failing to politicize disasters simply means we are reaffirming the status quo that facilitated the disaster in the first place.

Andrew Revkin has an indispensable overview of the political and economic policies that undergird Texas’ exposure to this extreme rainfall:

What’s vividly clear is the extreme vulnerability created by the continuing development pulse in some of the state’s most hazardous places — including Hays County, in the heart of an area that weather and water agencies long ago dubbed “Flash Flood Alley.”

The region’s population and building booms are far outpacing efforts to reduce exposure to flood dangers, resulting in long-predicted scenarios playing out at high cost in lives and money.

“The main challenge to rational planning for flood risk in the country is that private property rights trump even modest limitations on floodplain development,” said Nicholas Pinter, an expert on floods, people and politics at Southern Illinois University, in an email … “And that sentiment runs deep in Texas. The result is unchecked construction on flood-prone land, up to the present day and in some places even accelerating.”

Suffice it to say that the disaster unfolding in Texas is far from natural. And that’s why failing to politicize this event would be so irresponsible. If we don’t act now to begin a conversation, in earnest, on the underlying factors behind this disaster, we cannot hope to actually do anything to remedy them. As Revkin noted:

It’s important to get these [flood risk] studies done, but I doubt they’ll have much impact as long as politicians and communities in the region stick with the go-go development mentality that has been so vividly on display.

I see little evidence that leaders in the region have paid attention to the vast volumes of information they already paid for. The websites of Texas agencies responsible for managing water and limiting disaster losses are already full of valuable information clearly laying out the deep hydrological vulnerability in the state.

Innumerable reports on disaster risk and climate change are gathering dust on the shelves of policymakers around the country. What we need to effect any tangible change is a kick in the ass, and disasters like the one in Texas can provide exactly that. But only if we politicize them.

A host of social science research suggests that social and political change is not a linear process. Instead, change abides by the theory of punctuated equilibrium — that is, relatively long periods of stability (stasis) get interrupted by sudden bursts of rapid change. As Marcus Moensch, an expert on disaster risk reduction and climate change adaptation, described it back in 2007,

[C]hange is, at fundamental levels, a pulsed process. It often occurs in bursts or phases that are catalysed by disruption in pre-existing systems. Instability, in effect, frees resources and shatters conventional ways of doing things. This often leads to fundamental reorganisation of economic, social and livelihood systems. Reorganisation sets the stage for the next phase of more gradual ‘linear’ development.

Disasters can be one form of this “pulse.” In the immediate aftermath of disaster events, people are far more aware of the risks they face and the factors driving their vulnerability. Moreover, the physical and social disruption that disasters can bring often upset the entrenched status quo. Economic, social, and political systems may come under greater scrutiny for putting people at risk. Critical infrastructure, such as roads and homes, which would otherwise have long life spans and therefore foster inertia, are often heavily damaged or destroyed. And the influx of disaster relief aid can provide the necessary resources to facilitate changes that would be impossible under normal circumstances. In short, disasters provide a window of opportunity during which real social change can occur.

But that window is extremely brief. Perhaps it will be as little as three months, perhaps as much as a year. It will vary based on the local circumstances. With each day that passes, that window of opportunity closes another fraction. If we fail to act quickly, the disaster may shift from an opportunity to a liability. It could, as Marco Pelling and Katherine Dill argue, end up creating an “accelerated status quo,” in which the economic, social, and political structures that enabled the disaster to occur in the first place are recreated in the post-disaster setting.

Disasters provide us with an important opportunity to effect positive social changes. We cannot afford to waste that opportunity by wringing our hands over whether or not we should politicize things.

So the next time that someone tells you not to politicize a disaster, understand what s/he is really saying. It means that person is so wedded to maintaining the status quo that s/he would rather continue putting people in harm’s way than take steps to address the underlying problem. That’s not noble. That’s an abrogation of leadership.

Tim Kovach is an independent analyst and blogger from Cleveland who researches and writes about climate change, disaster risk reduction, and environmental peacebuilding at timkovach.com.