When my old friend Trip asked me to join him in a tandem sea kayak for Paddle in Seattle, a kayak flotilla protest against Shell’s oil explorations in the Arctic, my first impulse was a big Hell no. Spending an afternoon with hundreds of people who care deeply about climate change and are willing to brave the polluted waters of Puget Sound to make a statement may sound like a fine time to most Grist readers, but it combined two things I generally avoid: sea kayaks and activism.

Let me explain before you stop reading and take to the comments section: I grew up whitewater kayaking, and for most whitewater kayakers, flat water just isn’t fun — it’s the boring part of the river you paddle through to get to the good shit. Sea kayaks have always struck me as the sleepy, boring cousins of real boats — something you take up after you get your AARP card. As for activists, despite generally being in agreement about the issues, their willingness to actually take to streets (and waterways) triggers my guilt reflex. I should be out there, I think every time there’s a rally about climate change or police brutality or abortion or gay rights. I should be waving banners and beating drums and taking direct action, but I never actually do it. There’s always something else going on, like my bus pass is lost or my shoes are all the way across the room or Maury is on. Besides, what’s the point? How can a few hundred self-proclaimed “kayaktivists” compete against Shell, a company with $420 billion in revenue and the blessing of the Obama administration?

But with this story happening in my backyard, there was really no excuse to skip it, so I resisted my impulse to say no and agreed to join Trip in Elliott Bay for the big event. Trip, a filmmaker working with Greenpeace, would film from the bow of the boat and I would be in the stern, attempting to pilot a 20-foot-long ruddered behemoth that the whitewater paddler in me thought looked extremely lame. It’ll be fun, my friend told me. I didn’t believe him, but I went anyway.

I first met Trip Jennings, my paddling companion for the day, more than 15 years ago, when we were both teenaged whitewater kayakers. Trip grew up in Virginia, I grew up in North Carolina, and our paths would cross on the freestyle kayaking circuit, an annual pilgrimage of a few hundred dedicated boaters traveling around the U.S. competing for glory, sponsorships, and very little pay. For people like Trip and me, everything was about kayaking. It was a job, of sorts, in that we got occasional and meager paychecks from corporate sponsors, but it was more than that — it was our lives. We were teen athletes, but unlike our high school classmates, our sport didn’t have coaches or cheerleaders or letter jackets. We were on our own — a ragtag band of mostly guys who lived on ramen noodles and cereal and spent whole summers sleeping in tents or RVs. We smelled bad and had chronic ear infections and foot rot from too much time in the water. It was glorious, and we thought it would always be.

We were wrong. Fifteen year afters we first met, neither Trip nor I kayak anymore. He kept at it much longer than I did — I burned out in college, while Trip continued to boat well into his 20s, claiming first descents on rivers in North America, South America, Asia, and Africa as well as leading a 60-day source-to-sea expedition in Papua New Guinea that included a 55-foot waterfall and a crocodile attack. Trip was really, really good, and he became a famous for it, at least in the small world of adventure athletes. (I once opened up a National Geographic to see a giant photo of his face.) When we met up a few months ago for the first time in years and he told me he’d given it up, it seemed a bit sad, but I understood. We spent that evening discussing rivers, burnout, and the people we used to paddle with, many of whom are dead now. That’s something that also differentiated us from other athletes — our sport could kill you.

Even though I kayak only a handful of times a year at this point — usually on easy class 3 rivers with my near-70-year-old dad — the impact of kayaking on my life was huge, and it’s why I decided to join Trip in Elliott Bay: Kayaking made me care about the natural world. It showed me land undisturbed by human hands. It took me to deep gorges and narrow canyons and wild places that not many humans get to experience. It showed me a world that I want to survive whether humans are around to enjoy it or not. Kayaking turned me into an environmentalist: It’s why I work for Grist. It’s why I don’t drive a car. It’s why I spend my days thinking about climate change, and it’s why I worry so much about the future of our planet. 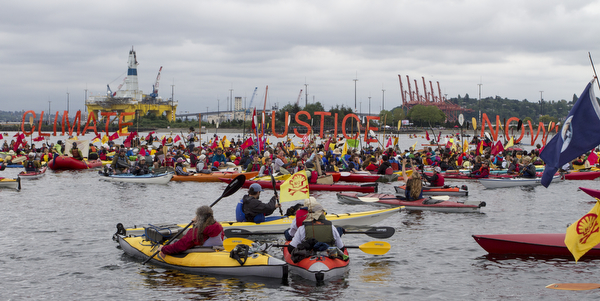 From a distance, the event could have been any large boating festival, with 200 brightly colored kayaks, canoes, paddle boards, rafts, and a lone swimmer gathered in the dark waters of the Puget Sound. But no one in their right mind would have chosen this location for a water festival, in the shadow of Shell’s 13-story Arctic drilling rig. The water we sat in is so polluted with industrial waste that it’s actually a Superfund site — it felt oily and made my skin tighten, like there was a layer of shrink wrap around my hands.

While Trip filmed for Greenpeace and I fitfully navigated our long boat, I saw up close how difficult organizing this many people must be, especially this many people in kayaks. No one much seemed to know what was going on, although a dread-locked organizer with a mega-phone kept shouting directions — “Make way for justice,” he yelled, as participants bumped into each other while attempting to unfurl a banner reading “Climate Justice Now.” A marching band played from a wooden boat, the Raging Grannies sang fight songs from their own vessel, and a solar-powered party barge bumped Sheryl Crow. Amidst this chaos, sea lions barked, a diving class practiced assents, a wedding ceremony took place on shore, and one lone worker stood atop the massive drilling rig known as the Polar Pioneer. None of them paid much attention to us. 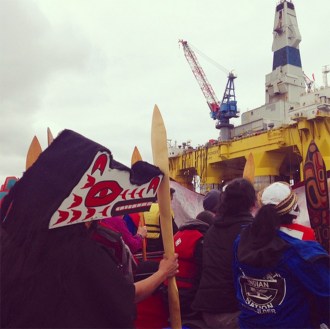 After a photo op with the “Climate Justice Now” banner, kayaktivists paddled to the Polar Pioneer itself, which is currently moored for maintenance before heading up to drill in the Arctic. The thing is huge: It looks like a giant, eight-legged monster and you can imagine it descending to Earth from a hostile planet. The procession was led by members of the Duwamish, Snohomish, Chinook, and Lummi Nations paddling dugout canoes, beating drums, and wearing traditional headdress. All chants of “Shell No” fell silent as tribal members stood in their canoes and spoke about what Arctic drilling and potential oil spills — which many see as inevitable — would mean to their future as a people. “I don’t know what our culture would be without whaling. It’s at the center of everything we do,” said Allison Warden, who traveled from Alaska to represent the Inupiaq tribe. “It’s a different relationship than just going to the grocery store. The whale feeds the entire community.”

As Native people beat drums and sung guttural and haunting songs from these beautiful wooden boats, it stopped feeling like a semi-organized piece of performance art and it started feeling real, and important. These people didn’t travel from Alaska to spend a nice afternoon on Puget Sound — they traveled from Alaska because this rig moving into their fishing waters could mean the end of their way of life. They traveled from Alaska because they had to. 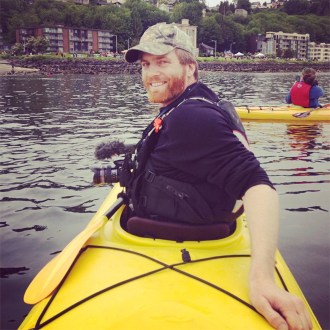 At some point in the afternoon, I took a photo of Trip in the bow of our sea kayak, turning back at me, smiling. Things are much different today than when we first met:  His trademark mane of red hair isn’t as bright now (nor is mine). Trip grew up to be a filmmaker, I grew up to be a writer, and neither of us grew up to be kayakers. But that afternoon on Elliott Bay — 200 boats, a few paddle boards, and one lone swimmer all fighting to be heard above the noise of an industrial sea port — brought me back to 15 years ago, to when everything was about the water. Back then, Trip and I didn’t know where our lives would end up, but we were sure that a river would take us there. In a way, I guess, we were right.

The question that remains is, will future generations have these experiences as well or will all our wild lands, our rivers, the earth we live on and the air we breath be destroyed by the eight-legged monster in our midst? That afternoon in Elliott Bay, it felt a little less inevitable.