Merry Christmas! How’s the weather where you are? Let me guess: Is it weird? I bet it’s weird. This holiday season has seen 70 degree days in Boston and tornadoes in the South, and it’s actually warmer in New York than it is in Los Angeles right now. People in Vermont are sleeping with the windows open! But as weird as it is, it’s also sort of appropriate — in the words of the New York Times, “a fitting end to the warmest year on record.”

And what a year it was! From wildfires to drought to finding out that you live on a massive fault line to the whole President Trump thing, there’s been a lot to freak out about in 2015. And now it looks like we’re on track to have the hottest Christmas since your cousin Jimmy set the tree on fire. From the Times:

In the contiguous United States, this autumn was the hottest on record, 3.3 degrees higher than the 20th century average. The first 20 days of December have been so warm that preliminary data from NOAA shows that more than 2,500 record highs have been tied or broken across the United States.

Temperatures in New York City are predicted to be in the 70s, more than 30 degrees hotter than normal. Tourists and residents alike seemed unnerved by the unseasonable weather.

Thirty degrees! Folks are right to be unnerved — it’s not OK to wear flip-flops on Christmas, unless you’re unlucky enough to be in Florida. But is climate change to blame for this or is it something else?

It’s something else — El Niño, to be exact. But that shouldn’t make the heat less disconcerting, and we can’t escape the fact that 2015 was the warmest year in the planet’s history. It’s almost like we’re getting a visit from the Ghost of Christmas Future, when it’s not El Niño that’s causing your boob sweat, but a warmer climate. As Eric Holthaus wrote in Slate, “Heat waves like this one have among the clearest ties to global warming of any extreme weather event. Next week, New York City will lock in its longest-ever stretch of days above freezing. The seasons are perceptibly shifting.”

And with them, public perception — especially among the nation’s youth. Reuters reports:

Unusual weather is dominating the conversation on social media for the holidays, especially among millennials, who are increasingly concerned about climate change.

Yik Yak, a location-based mobile app popular with millennials, surveyed its audience and found nearly 70 percent are worried about climate change. More than a quarter of them say their concern has grown due to the unusual winter weather this year. …

Of the 30 percent of respondents who said they were not concerned about climate change, 18 percent said they did not know or did not care about the issue, while just 9 percent thought it was myth.

Guess we know who that 9 percent will be voting for. Speaking of voting, here’s a small gift to make your hot and humid Christmas a little more cheery: this Fox News poll with Bernie Sanders winning by a landslide — even in Texas! Merry Christmas! 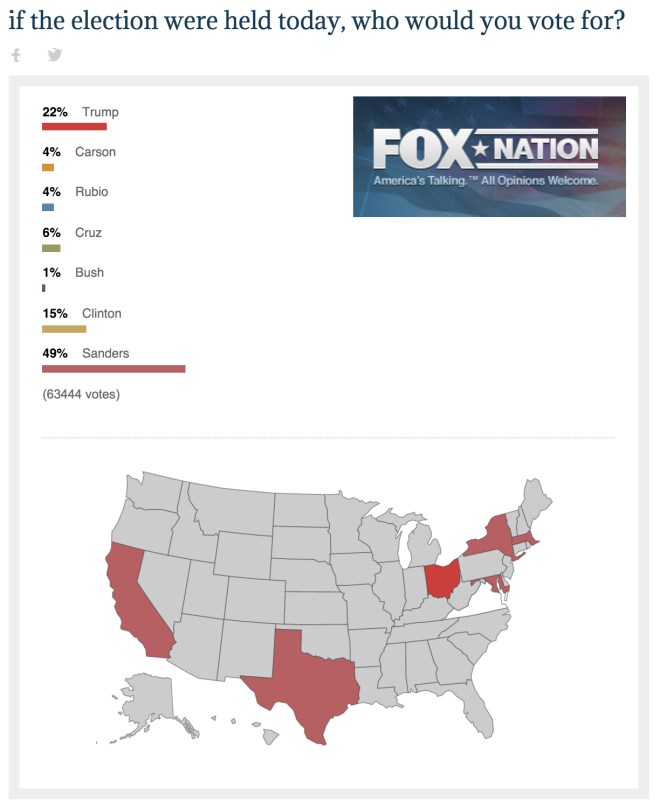 How to get rid of Christmas garbage, from lights to mistletoe