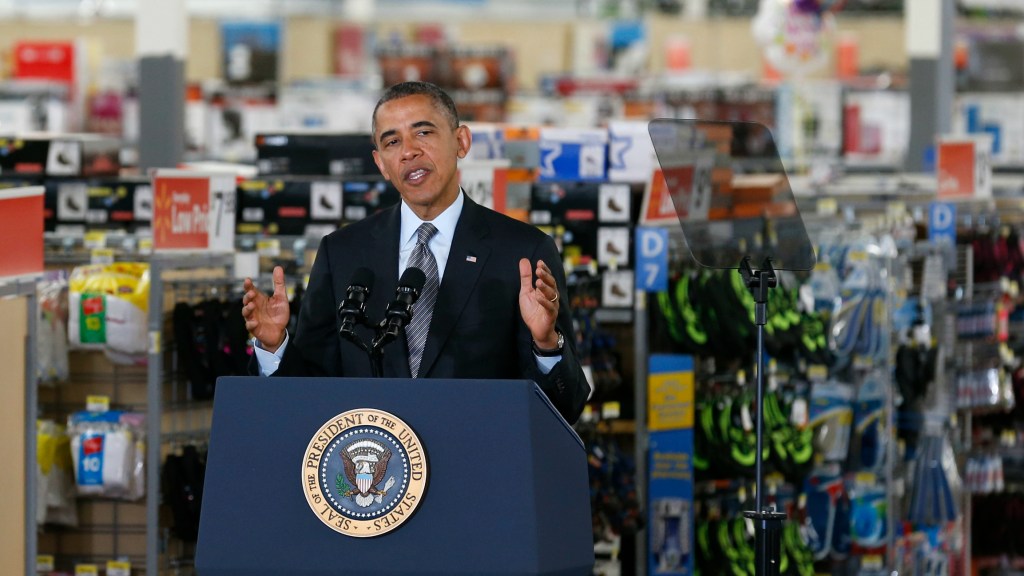 On Friday, President Obama rolled out a series of executive actions to reduce our dependence on dirty energy.

“There are cost-effective ways to tackle climate change and create jobs at the same time,” he said during a speech at a Walmart in Mountain View, Calif., which he chose because — unlike most Walmarts — it uses solar panels on the roof, LED light bulbs, and efficient refrigerators.

The initiatives announced today have two main aims: boost the deployment of solar energy in the private sector, and improve energy efficiency throughout the economy. Environmental groups are enthusiastically praising the measures.

If you’re apoplectic about the horrible, deadly consequences of unchecked climate change, recently detailed in the Obama administration’s National Climate Assessment, these steps might seem a little small-bore. They are.

But Obama is trying to do everything he can without the participation of the Congress, seizing the smallest opportunities for executive action. Right now, even a cost-free energy-efficiency bill that Republicans initially supported is being blocked by Senate Republicans because Democrats refuse to attach an unrelated measure to repeal the EPA’s authority to regulate greenhouse gases.

“I want to work with Congress,” said Obama in his speech. “Unfortunately, Congress has not always been as visionary on these issues as we would like. It can be a little frustrating. But in this Year of Action, wherever I can go ahead and create my own opportunities for new jobs, I’m going to take it.”

Next month, Obama will be making a much bigger, more controversial climate move — releasing new rules that will crack down on carbon dioxide pollution from coal-fired power plants around the country. That is already eliciting howls of protest from Big Coal, Republicans, and even some Democrats who are facing tough reelection campaigns in dirty-energy-producing states.

Here’s a breakdown of the plans Obama laid out on Friday for solar energy:

And here are the plans for energy efficiency: