The fight against Keystone XL changed the climate movement. Here's how 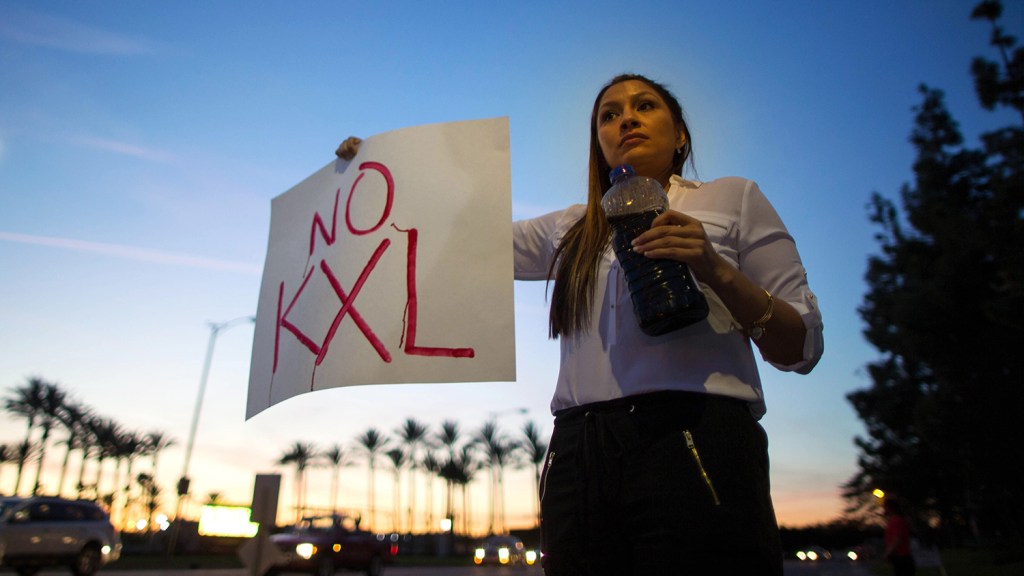 The fight against Keystone XL changed the climate movement. Here’s how

The U.S. climate movement has gained a lot of clout in the four years since it made Keystone XL into a major target. In part, that’s because the organizing against Keystone helped the movement develop a number of assets it previously lacked. Here are the six big ones:

In the few years leading up to and following President Obama’s election in 2008, the environmental movement’s climate focus was on passing a big bill to cut greenhouse gas emissions. Congressional Democrats wanted to make it happen, and even Obama’s Republican opponent, John McCain, supported cap-and-trade, so green groups’ efforts were focused on the legislative process. The House of Representatives passed the Waxman-Markey climate bill in 2009 but the Senate failed to pass a companion bill in 2010, and then Democrats lost control of the House. Climate hawks were adrift. What could they do without the votes in Congress to pass legislation? Eventually, the White House moved forward on its own under a legal mandate to regulate greenhouse gas emissions under the Clean Air Act. But even as the administration attacked emissions at the smokestack, it simultaneously fueled them by ramping up fossil fuel production.

That ultimately led the climate movement to its new purpose: fight to keep fossil fuels in the ground and put an end to Obama’s “all of the above” energy strategy. “We came to the fight during the ashes of the climate bill,” says Lena Moffitt, director of the Sierra Club’s “Stop Dirty Fuels” campaign. “Keystone XL provided an organizing opportunity that was unprecedented.” As Karthik Ganapathy, a spokesperson for 350.org, explains it, “The environmental movement went from focusing on smokestacks to carbon in the ground. That changes the way we talk about things, the way we throw our resources at things, and the way we pressure policymakers.” That includes pressuring presidential candidates, notably Hillary Clinton, who over the summer was called out by 350 activists for not opposing fossil fuel extraction on public land.

The fight against Keystone XL united a diverse coalition, including indigenous activists, farmers and ranchers, and college students. All of those groups have been present at major anti-Keystone demonstrations, such as the “Cowboys and Indians” event on the National Mall,  as well as bigger, broader climate rallies in Washington, D.C., and New York. In particular, the People’s Climate March last fall in New York brought rural opponents of the pipeline together with urban, predominantly non-white social justice activists.

The Keystone fight built up the climate movement’s activist base by engaging a whole new group of young people: it inspired them with a specific issue to fight on and then gave them experience in running a campaign. “People got trained in how to get arrested and do civil disobedience,” says Ganapathy. “It created institutional knowledge. The people who got trained doing civil disobedience [during the Keystone protests] trained the people who got arrested outside John Kerry’s house protesting the Alberta Clipper,” he says, referring to an August demonstration in front of the secretary of state’s home to protest plans to allow Canadian company Enbridge to expand a cross-border tar-sands oil pipeline.

Mainstream environmentalists have never been known for bare-knuckles political brawling — hence the slur “tree hugger” and the image of a soft hippie it conjures. Too often they’ve held back from criticizing Democrats even when criticism is deserved. But the Keystone campaign spurred greens to become more aggressive, and to realize how useful that approach can be. “Pressure on Obama — friendly pressure but quite firm — is one of the things that worked and will work again no matter who is the decision maker,” says Kenny Bruno, campaign coordinator at Corporate Ethics International. He sees that lesson already being applied in other fights: “The approach of a friendly militancy toward political friends, or presumed friends, is something we see happening in the campaign against Arctic drilling.” And grassroots activists say the effectiveness of raising hell from outside the White House has filtered up to the larger, more established organizations. “So-called Big Green has evolved toward respecting these methods and dynamics more than before,” says Bruno. Indeed, the first time the Sierra Club ever sanctioned civil disobedience was at a Keystone protest in front of the White House in 2013, at which the group’s executive director, Michael Brune, got arrested.

Conservative activists have long known that to get what they want from Republicans, they have to make the party elite fear the wrath of the base. Liberals have finally begun to imitate that strategy on climate change, and now it’s resulted in a clear win: Obama’s Keystone decision was arguably all about appeasing the base. Democratic campaigns, even for genuine climate hawks like Al Gore and John Kerry, used to avoid much public discussion of climate change. It was seen as anathema to voters in industrial Midwestern swing states that rely heavily on coal-fired power plants for energy-intensive manufacturing. But now there’s a new dynamic, stemming in part from the Keystone fight, that will push the next Democratic president to cater to the liberal base’s demands on climate in a way that previous Democrats have not. Now, Democratic presidential candidates — especially Martin O’Malley but also Hillary Clinton and to a lesser extent  Bernie Sanders — are emphasizing climate change. All of them see as much to be gained from appealing to young, non-white, and college-educated voters who care about climate change as could potentially be lost among working-class white voters. The dedication of all the young Keystone and fossil-fuel-divestment activists helped demonstrate to politicians that young liberals care more about climate change than older ones.

It is a longstanding gripe of high-minded journalism scolds that the news media covers imminent, if ultimately small, disasters with an energy it never devotes to large, slow-moving ones like climate change. In part, that’s because good stories require news pegs and conflict. During the Keystone fight, activists got good at supplying both, and therefore pushed the media into covering climate change. When the anti-KXL campaign first started to take shape in 2009-2010, media coverage of climate was at rock bottom. Economic concerns were assumed to trump the environment in the average viewer’s, reader’s, or voter’s mind. By showing that people were committed enough to handcuff themselves to the White House fence, the anti-KXL movement woke up assignment editors to the growing desperation of Americans trying to preserve a livable climate — and gave them good visuals too. Climate activists have continued the trend with camera-friendly protests like those featuring colorful kayaktivists opposed to Shell’s Arctic drilling.

Liberal wonks at think tanks and magazines have been critical of the anti-Keystone fight, arguing that activists picked the wrong target and should have focused their energies elsewhere. But anti-KXL activists dismiss this criticism, which comes from people who have never run an activist campaign. While it is true that stopping Keystone won’t have as big of a direct impact on greenhouse gas emissions as, say, Obama’s Clean Power Plan, that doesn’t mean a campaign focused around power plant emissions would have been more successful. Organizing and movement building is at least as much about getting people engaged and involved as it is about stopping or starting any individual new project. The fight against Keystone — which was straightforward and easy to understand — engaged a lot of new people and helped build up a real climate movement. That movement can now channel activist energy into supporting Obama’s power plant rules, pushing for a good climate deal in Paris, stopping fossil fuel extraction on public lands, and more — but that activist energy would not have existed without the KXL fight in the first place.