It’s finally raining in California — just when we’d begun to think that it would never rain again. But the state is deep in water debt. Traditionally, California has depended on snowmelt for about a third of its water. The recent storms have gotten California’s snowpack up to slightly above average for this time of year, but it’s going to take a lot more than that to refill reservoirs. 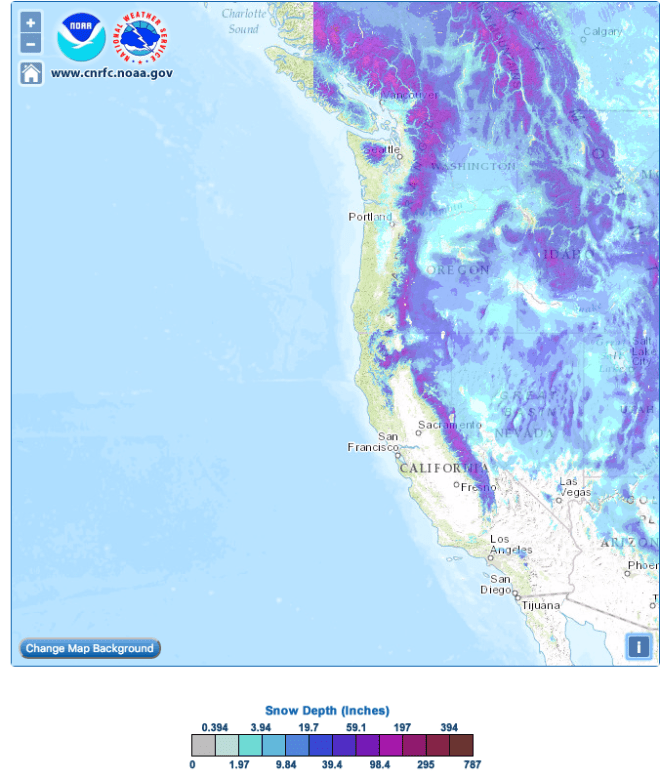 Compare the current snowpack (above) to this time last year. 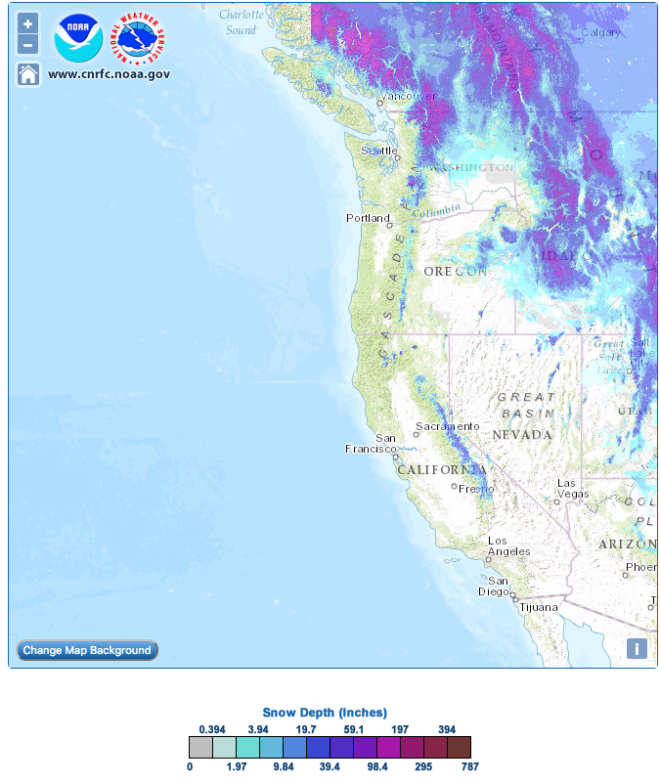 Why are we seeing more snow? Well, it got colder and wetter. Last year, average minimum temperature in the Sierra Nevada mountains was 32.1 degrees, which meant it just wasn’t cold enough to snow in most places. “Temperatures are getting warmer every year,” said Doug Carlson, an information officer at the California Department of Water Resources.

Last year a ridge of high-pressure air was deflecting storms, said Nina Oakley, research climatologist at the Western Regional Climate Center. It was also warming things up. A high pressure ridge means clear skies (and therefore more warm sun), descending air (which also causes warming), and in California it also meant more warm air coming from the south, she said. Now we have just the opposite: Low pressure, cloudy skies, cold air from the north, and “a fairly steady parade of low pressure systems,” she said.

And yet, all that cold-looking purple and blue adds up to just over average for this time of year. 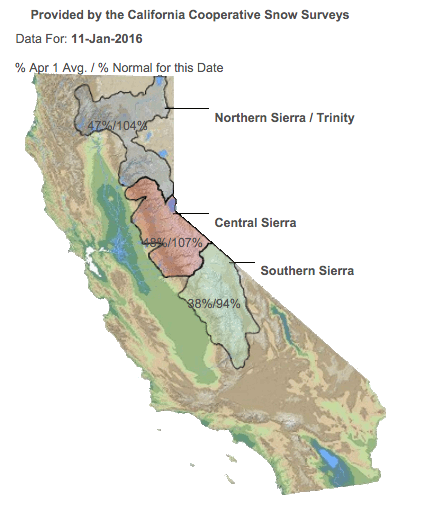 The recent storms have added a lot of water to reservoirs, like the Folsom Reservoir, which catches the American River. 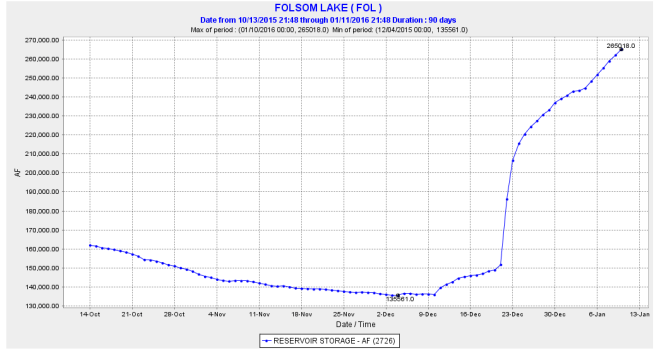 But despite those inflows, most reservoirs have 50 percent of the water, or less, that they’d normally contain this time of year. 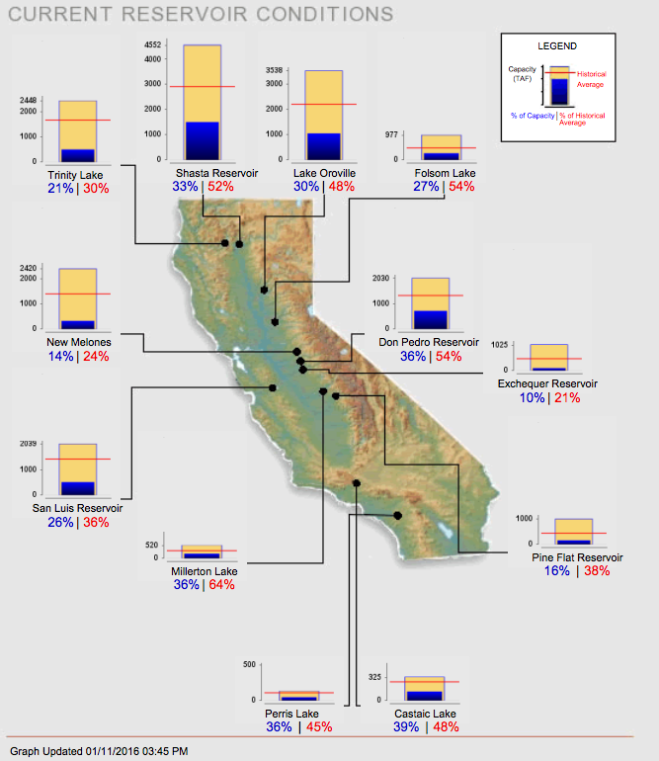 And if you look at precipitation — it’s about average. 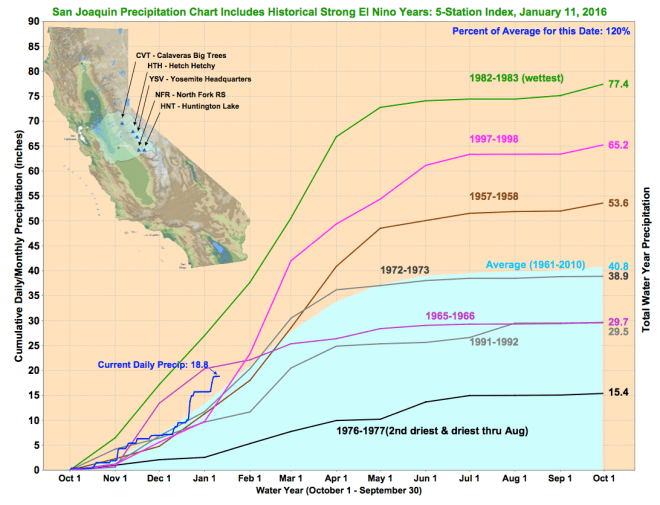 Still, it’s too early to tell. California has seen more rain this season than it had seen by this time in the drenching wet season of 1997-1998. If something like that happens again, the drought could be over. “It’s just so darn unpredictable,” Carlson said. “It could get going like gangbusters, or it could peter out.”

The National Weather Service, looking at the big picture, is expecting an improvement in the drought, but not an end to it. 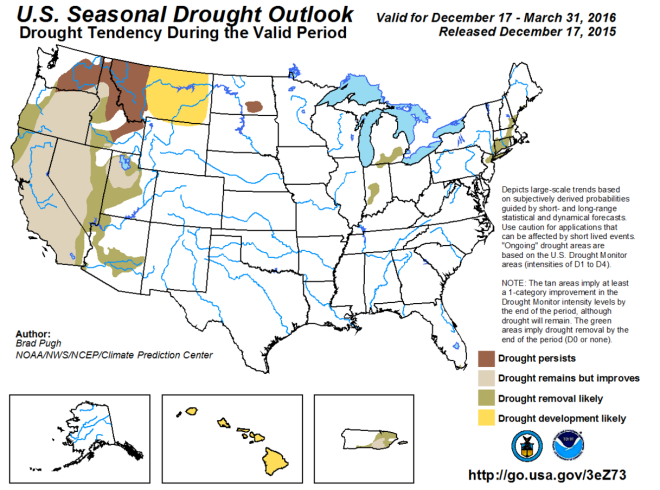 All this rain has gotten Californians a bit more liberal with their taps, and the state has (narrowly) missed its water conservation goals for the last two months. Rather than doing rain dances or buying shade balls, California should concentrate on implementing its groundwater law, on capturing more water, and on fixing up its water market (which would allow water-rights holders using cheap water for farming to sell it for other uses). Even if the rain gods bless California this year with enough water to end the drought, it will return.