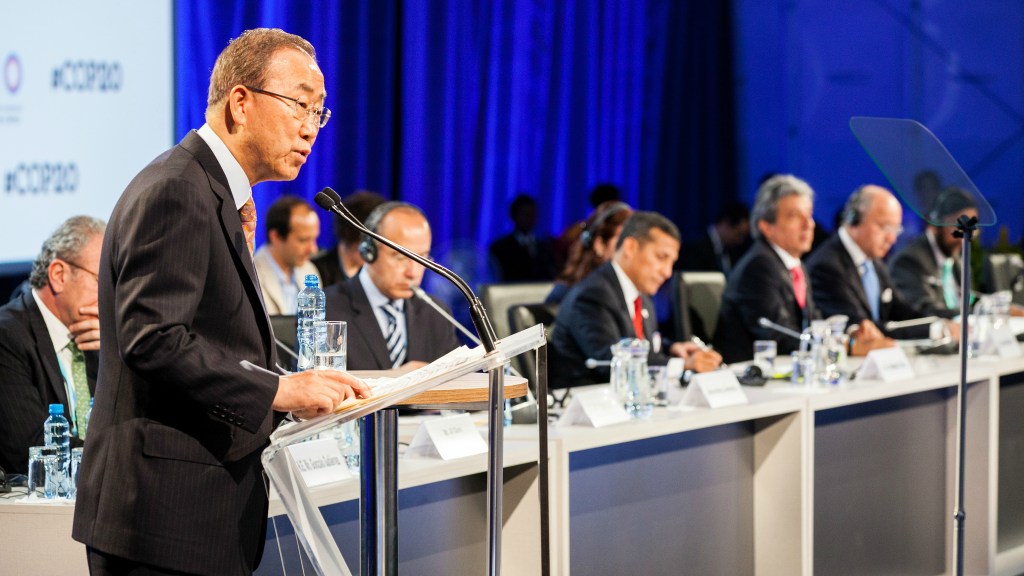 LIMA, Peru — The U.N. climate summit kicked off two weeks ago with an unfamiliar sense of optimism, invigorated by the recent agreement between the United States and China. But it ended with an all-too-familiar sense of disappointment.

On early Sunday morning, delegates delivered a vague, four-page document that does little more than set the terms for what the parties will be battling over at the next big summit in Paris a year from now.

After two weeks huddled in sweaty, sweltering tents (yes, many a “greenhouse effect” joke was made), the various negotiating blocs found themselves unable to agree on a handful of major issues. So in overtime sessions over the weekend, the stickiest of the sticking points were stripped out from one draft text after the next, until very little remained.

Green groups and citizens from vulnerable, developing nations bemoaned the lack of commitment and urgency.

“Make no mistake: Lima delivered a pathetically weak outcome, because developed countries like the U.S. are failing to meet their obligations,” said Brandon Wu, a senior policy analyst at ActionAid USA. “A tiny bit of progress does not make up for decades of inaction on both emissions cuts and providing finance for poor countries.”

Others complained that the U.N. process lags woefully behind public momentum for ambitious climate policy. “There is still a vast and growing gulf between the approach of some climate negotiators and the public demand for action,” said Winnie Byanyima, executive director of Oxfam International.

So what did we get?

At about 1:30 a.m. Lima time on Sunday, after the gavel’s final thud, a standing ovation ripped through the main plenary tent. What was everyone cheering about? That it was over, mostly. More than 33 hours after the conference was supposed to end, and after many sleepless nights, all the negotiating blocs had grudgingly agreed to the so-called “Lima Call for Climate Action.”

Optimists and U.S. negotiators will say that the Lima deal lays the groundwork for a big agreement to be reached in Paris. They’ll point to the fact that, for the first time, all 196 member nations of the U.N. Framework Convention on Climate Change have agreed to cut their rate of greenhouse gas emissions.

But they haven’t agreed on how much they’ll cut. Or by when. Or how they plan on doing it. They haven’t even agreed to actually cut emissions, just the rate of emissions. Someday. They promise.

No official means of review were agreed upon, nor exactly what the countries need to include in their pledges. The U.S. will offer a reduction target and baseline year — a 17 percent emissions cut below 2005 levels by 2020. China will offer a reduction in its carbon intensity, or the greenhouse gases emitted per unit of GDP.

Governments are basically making up their own homework assignments for Paris, and then grading them too.

The United States and China have long traded jabs in the U.N. climate arena, and each have taken heavy blows from other countries over the years for consistently laying down roadblocks to progress. This year, because of the legacy-building milestone joint announcement by Presidents Obama and Xi in November, the two largest polluters in the world arrived at the talks with the air of leaders. Unprecedented.

But that didn’t last. Word from the sleep-deprived plenary halls this weekend has it that the U.S. and China’s fingerprints were all over the thin agreement that finally emerged.

From the sounds of it, in closed-door meetings late at night, in the frenetic panic to produce something, the U.N. leadership worked with a handful of nations — lead by you know who — to come up with the slight draft that now underwhelms the world.

Offering tepid support for one of the later, weaker drafts, top U.S. diplomat Todd Stern repeated an old favorite Obama White House line, imploring his fellow diplomats not to “let the perfect become the enemy of the good.” He acknowledged that the text was not ideal for any country, but said, “we have no time for lengthy negotiations and we all know that.”

The final couple of drafts had been stripped of all the most controversial items, leaving only the national pledges as a concrete demand — which is what the U.S. and European Union had wanted all along. Gone were the details of money for adaptation, of how nations would meet their pledges, of specific long-term ambitions or very near-term emissions reductions.

When the dramatically stripped-down version of the text surfaced on Friday, nations left out of the loop were displeased. Campaigners for a fair, ambitious deal were furious.

“By consulting with only the major powers like the USA and China and ignoring the African countries and other small developing nations, they have effectively redrawn the map of the world,” said Mohamed Adow of Christian Aid. “What’s so offensive is that it is the countries suffering the most from climate change who have been sidelined in a process which should be helping them.”

Agreeing to disagree … for now

The hard work is yet to come. Delegates punted a whole lot of tougher issues down the road to be fought over in Paris. The biggest hurdles:

The zero that got away

For a minute there, it seemed as if the Lima agreement would include a target of zero greenhouse gas emissions or a fossil fuel phaseout, possibly by 2050. There it was, sitting in the text, pleading for “net emission levels near zero gigatons of carbon dioxide equivalent or below.”

That didn’t make it into the final deal. But, fleeting as it was, it was still a remarkable first for a staid and slow-to-react body. “By putting a zero-emissions target on the table, Lima has thrown a lifeline to the world,” said Iain Keith, a campaign director for Avaaz.

Martin Kaiser of Greenpeace said that the total phaseout of carbon emissions by mid-century is already supported by 50 countries, and Jamie Henn of 350.org added that nearly 100 countries support zero emissions by 2100. “If all countries agree to a carbon-free future in Paris,” said Kaiser, “it can catalyze a rapid transition away from dirty energy. A goal to phase out fossil fuels can provide a sure bet for investors to know where to put their money.”

The pathway to Paris

While governments were able to duck and cover in Lima, they won’t have that luxury in Paris, where the world will be closely tuned in and expecting an agreement.

What happens between now and the start of the talks in Paris in early December 2015? First, a February meeting in Geneva, where delegates hope to clarify what exactly nations will have to report with their pledges. Rich, developed countries are supposed to have those pledges in by the end of March, when they’ll be published on a U.N. website. There will be another meeting in Bonn, Germany, in June, and then one or two more sessions in the summer and fall before Paris.

But experts say what matters most is that countries make their pledges soon, and make them clear. “What’s most important now is for other countries to declare their contributions to the Paris agreement,” said Elliot Diringer of the Center for Climate and Energy Solutions. “As long as others follow the lead of the U.S., China, and the European Union, we should have a decent shot at a meaningful global deal.”

Will that Paris deal be anywhere near as strong as climate campaigners hope? The outcome at Lima is not encouraging.