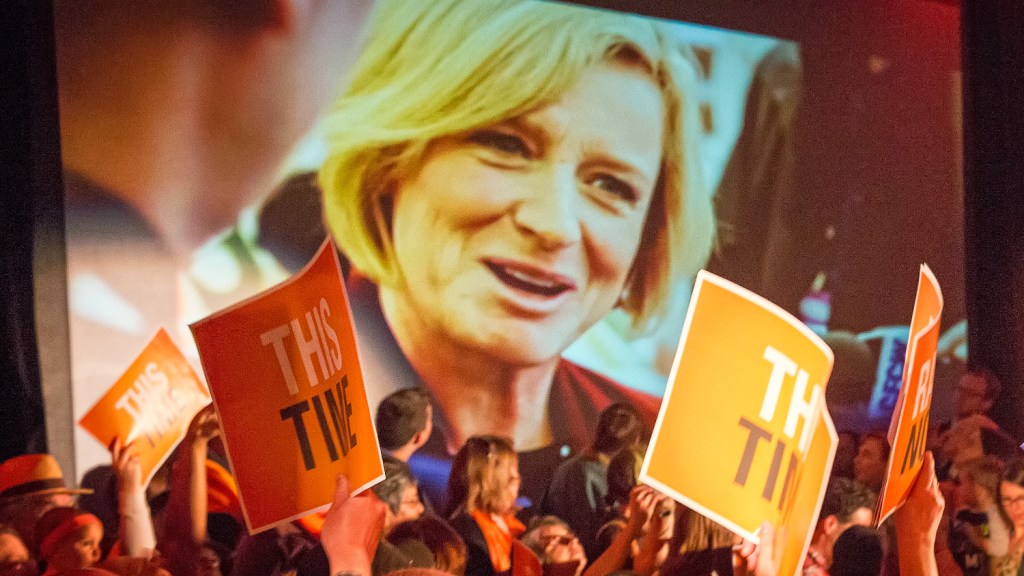 American environmentalists are frustrated that our adorable neighbor to the north is surprisingly retrograde on climate change. The reason is that Canada has a Conservative government. Right-leaning governments almost always have worse records on environmental protection, but this is especially so in present-day Canada because Prime Minister Stephen Harper hails from, and draws a lot of support in, the interior province of Alberta.

Oil-rich Alberta — home to notorious tar-sands operations — is north of Idaho, and has the politics to match. The right-leaning party has been in power there for 44 years. But not anymore.

On Tuesday, the lefty New Democratic Party (NDP) won the provincial elections on a platform that promises to diversify Alberta’s fossil fuel–dependent economy. The NDP campaigned on criticism of the Conservatives for being too close to the oil industry and a pledge to tax more oil profits. From The Wall Street Journal:

The longtime ruling party of Canada’s energy-rich Alberta province lost its four-decade hold on power on Tuesday, ushering in a left-leaning government that has pledged to raise corporate taxes and increase oil and gas royalties.

The Alberta New Democratic Party swept enough districts to form a majority, taking most of the seats in both the business center of Calgary and the provincial capital of Edmonton, according to preliminary results from Elections Alberta.

Canada has a multi-party system. The three biggest are the Conservative Party, which is the largest right-of-center party; the Liberal Party, which is center-left and roughly equivalent to mainstream U.S. Democrats; and the NDP, which is like the left wing of the Democratic Party. So this election result is shocking, like Dennis Kucinich being elected governor of Alabama. For historical reasons, the Alberta Conservative Party is oxymoronically known as the Progressive-Conservatives, but this doesn’t mean they are any more moderate than other Conservatives. The Alberta NDP is moderate compared to the NDP of, say, liberal green-minded British Columbia. But the election result is still a paradigm shift with potentially major environmental implications.

“We need to start down the road to a diversified and resilient economy. We need finally to end the boom-and-bust roller coaster that we have been riding on for too long,” NDP leader Rachel Notley, who is expected to succeed [Jim] Prentice as Alberta’s premier, said at a news conference.

The NDP has long been a marginal force in Alberta’s traditionally conservative politics, but recent public opinion polls showed its popularity surging. In the campaign, Ms. Notley attacked Mr. Prentice for reinstating provincial health-care premiums and being too cozy with oil-patch interests.

In a move that spooked some energy company executives during the campaign, Ms. Notley raised the specter of increasing royalties levied on oil and gas production, although she said that her party would only consider that once crude-oil prices recovered from recent lows.

She also signaled her party wouldn’t support a proposed Enbridge Inc. crude-oil pipeline, called the Northern Gateway, which would connect Alberta’s oil sands with a planned Pacific coast terminal in British Columbia, telling a local newspaper that “Gateway is not the right decision.”

Notley also doesn’t support plans for Keystone XL, and pledged to stop spending taxpayer dollars to push the pipeline in Washington, D.C. (She does support two other tar-sands pipeline projects, though.) And she wants Alberta to get more serious about climate change, as the Globe and Mail reports:

Another focus, according to Ms. Notley’s platform, will be bolstering the province’s reputation on climate change as previous governments have resisted establishing tougher targets for carbon reduction from the oil sands and other industries.

The NDP triumph in Alberta may put political pressure on the Harper government, which is facing a federal election this fall. The province’s voters sent the message that they want more protection for the environment and less pandering to oil interests. This couldn’t happen at a better time, as environmentalists are nervously awaiting Canada’s proposal for carbon emission reductions heading into the U.N. climate negotiations to be held this December in Paris. Will Harper now make a more significant climate commitment? We’ll all be watching to see.