Here in Seattle, we are in the midst of a truly epic fustercluck. We’re trying to build a huge tunnel beneath our downtown and it is not going well, to put it mildly. If only someone had warned us! (Like, I don’t know, a mayor.)

Our own Nate Johnson has written about the propensity of transportation megaprojects to blow past their projected budgets. But what about my own personal obsession, power projects? Think, for instance, of the Kemper power plant in Mississippi, which is still under construction and already several billion dollars over budget and several years behind schedule.

Nerds to the rescue! As it happens, energy researcher Benjamin Sovacool and colleagues recently released a pair of peer-reviewed studies (one, two) that dig way, waaay into this subject. Some of the results are surprising, going against widespread assumptions and my own hunches. Some are just what you’d expect. (Spoiler: Smaller, more modular power projects see cost overruns less often and therefore represent less financial risk.)

Let’s quickly walk through the results and then consider a few broader points.

Sovacool et al. began by assembling a database of “401 electricity projects built between 1936 and 2014 in 57 countries.” There were six categories: big hydro dams, nuclear plants, thermal (coal/natgas/oil/biomass) plants, wind farms, solar farms (PV or CSP), and high-voltage transmission lines. “In sum,” they write, “these projects required roughly $820 billion in investment, and amounted to 325,515 MW of installed capacity and 8495 km of transmission lines.”

They took this database and ran all kinds of regression analyses on it. As to the basic question of which kinds of projects suffer cost overruns and how big those overruns are, this is what they found: 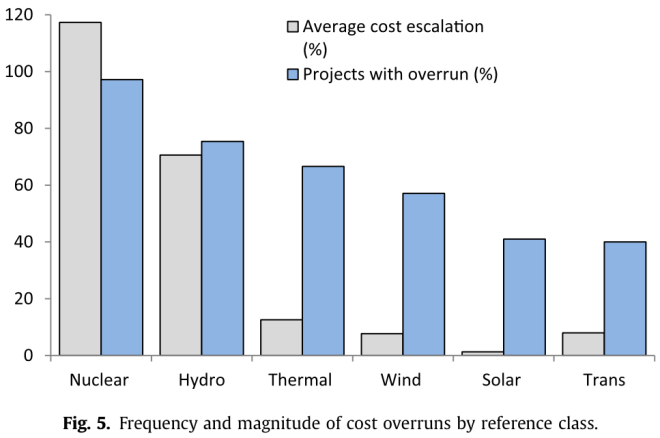 More than 75 percent of the projects had cost overruns. Across the whole database, “the mean cost overrun per project was almost $1 billion, or a mean cost escalation of 66 percent.” Obviously there are big differences category to category, which we’ll get to.

In their first paper, the researchers test six hypotheses against their database. Here they are:

We’ll take them quickly one at a time. (I’m glossing over a lot of detail here. When I say “true,” I just mean that there’s a statistically significant relationship. See the paper for methodological details.)

Hypothesis one: bigger is bad

Verdict: only for hydro.

It appears true that the bigger the dam, the more likely and sizable the cost overrun.

But for nuclear, it’s not true. Nuclear plants are prone to cost overruns no matter their size!

Verdict: true only for transmission lines, hydro, and nuclear.

Much less true for thermal and wind plants. For solar plants, longer time overruns actually reduced costs, most likely because of the precipitous decline in panel prices during the period they were built.

The idea here is that there’s a learning curve — as people get used to building a particular kind of project, the number of cost overruns declines. First-of-kind projects are most prone to overruns.

Hydro and thermal plants showed learning effects until the ’70s and then cost overruns started increasing again (perhaps due to the need for complicated new environmental controls, or the rising cost of materials).

Nuclear alone seems to show a mild negative learning curve — there are more overruns as time goes on.

Are there fewer cost overruns in countries with better governance and more reliable institutions?

Verdict: turns out not really!

Europe’s performance is roughly in line with Africa, the Middle East, and the Asia-Pacific.

The worst performer, by a wide margin, is North America, mainly due to its many nuclear plants, which, again, almost always go over cost. Remove the nuclear plants from the equation and North America’s performance falls roughly in line with or below other regions.

[A]s one moves down in project size from hydro (mean project capacity of 1865 MW) and nuclear (987 MW) to thermal plants (710 MW), wind (35 MW), and solar (39 MW), one sees a significant reduction in the mean cost escalation per project and the frequency of project overruns. Interestingly, transmission projects, perhaps also because they are relatively modular, have similar construction benefits.

Even normalized on a per-MW basis, smaller projects do better than bigger ones.

Here’s a nerdtastic chart of the conclusions I just described: 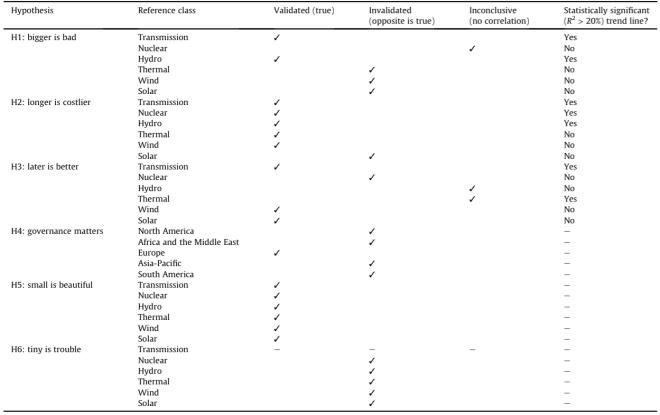 Some of these results (like the one on governance) seem to cast doubt on assumptions that are widely shared in the literature. Hopefully it will spark more research and conversation.

Sovacool and colleagues have a whole second paper that gets more into detail on why various technologies do (or don’t) tend toward cost overruns.

It’s worth quoting at length from the conclusion:

In short, construction of electricity infrastructure faces a high risk of cost overruns. Cost overruns are bad for planners, who cannot adequately compare the costs of different options; bad for investors, who lose money on a project, or in the extreme, go bankrupt; and bad for environmentalists, who may be inadvertently supporting infrastructure that does not get built when, and at what cost, they thought it would. …

Considering the likelihood of overruns therefore could be critical for major energy policy trends and decisions, such as climate change mitigation options and determining the overall cost efficacy of energy projects. To date, wind and solar projects have come in smaller capacities, often ranging from 1 to 250 MW. Thus, more projects must be built to meet large segments of electricity demand (smaller unit size is also characteristic of smaller natural gas plants). Hydro and nuclear units, by contrast, are most often built in chunks of 500 MW or even 1000 and 1500 MW — which is why they are often referred to as “lumpy” investments. The downside, suggested by our study, is that while these large, lumpy systems can provide very large increments of power, making them attractive from an emissions standpoint or even an industrial or urban access standpoint, they also suffer the greatest risk of an overrun. In other words, the climate and energy security benefits of nuclear and hydro are achieved only through enhanced financial risk. On the other hand, our data suggests that expansion of wind and solar projects, including a movement to larger projects, would not carry the same risk of cost overruns. [my emphasis]

To reiterate: Among low-carbon options, wind and solar projects are less risky than nuclear and hydro.

Politicians and oligarchs are drawn to Big Projects, thoughts of legacy and bright futures dancing in their heads, occluding rational risk assessment. Sovacool et al. quote from a piece in Harvard Design Magazine by Bent Flyvbjerg, who in addition to having the greatest name ever is a longtime researcher on megaprojects:

Which large projects get built? My research associates and I found it isn’t necessarily the best ones, but instead those for which proponents best succeed in designing — deliberately or not — a fantasy world of underestimated costs, overestimated revenues, overvalued local development effects, and underestimated environmental impacts.

Sounds like our beloved Seattle tunnel. And every municipal sports stadium. And every big nuclear power plant or hydroelectric dam. They dazzle those would-be Great Men.

Time to get past that kind of thinking. The 21st century will be characterized by pervasive risk. As proponents have been saying for years, distributed renewable energy is available in smaller, more predictable chunks and thus can scale up more smoothly and with less risk. Time for energy forecasters, investors, and politicos to put that knowledge to use.