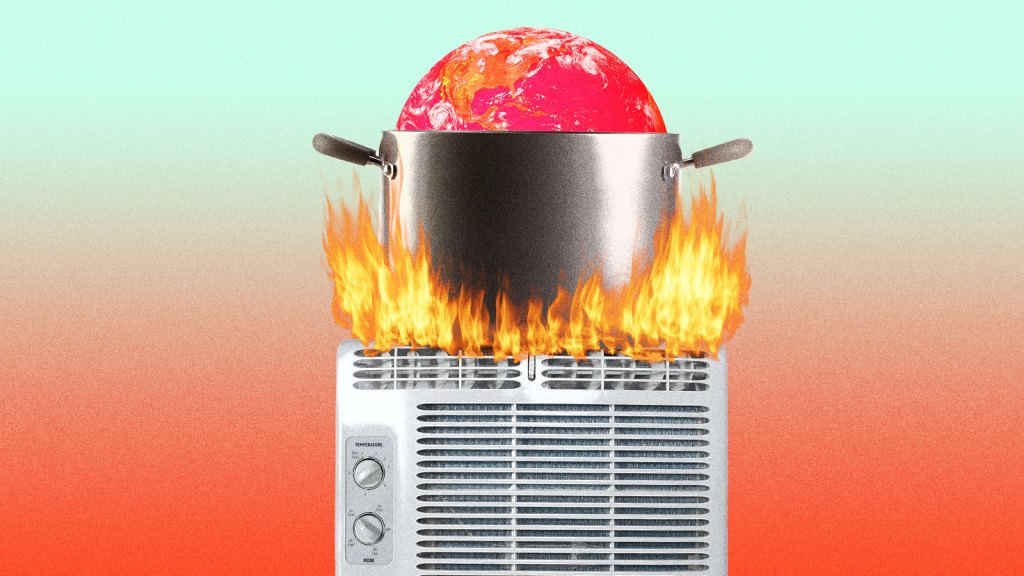 How air conditioning could keep everyone cool without cooking the planet

Last month, as a record heat wave roasted California, statewide energy consumption skyrocketed, forcing grid operators to issue rolling blackouts for the first time in nearly 20 years. The reason the grid was under so much strain? Millions upon millions of air conditioners were running full tilt. It was a stark illustration of the challenge humanity will face trying to keep everybody cool as the planet overheats.

That challenge cuts both ways: Climate change is driving up demand for air conditioning, refrigeration, and other technologies that keep us and our food cool. Yet, cooling makes a sizable contribution to the climate crisis.

In 2018, cooling equipment accounted for 17 percent of global electricity demand, according to a recent U.N. report. Most of the electricity powering those devices was produced by burning fossil fuels, which drives global warming. To make matters worse, most of today’s refrigerators and ACs use a class of coolants called hydrofluorocarbons, or HFCs, greenhouse gases thousands of times more powerful than carbon dioxide.

The problem is only getting worse: Globally, air conditioning use is set to triple by mid-century as warming drives higher demand in wealthy countries and as billions of people in the developing world gain access to the technology for the first time. “The air conditioners will cook us if we don’t get our act together,” said Durwood Zaelke, the president of the Institute for Governance & Sustainable Development, of IGSD, and a co-chair of the steering committee for the new U.N. report.

Heat kills. Why don’t we talk about it that way?

The good news is that many of the solutions we need to make cooling more climate friendly already exist. We need to get HFCs out of our refrigerators and air conditioners, make our cooling tech more efficient, dispose of old and leaking cooling devices properly instead of dumping them in landfills, and design our buildings and cities to stay cool. If we can do all of that, our quest to stay cool might not inadvertently boil us alive.

Experts say that the first two solutions — eliminating HFCs and driving up the efficiency of air conditioners and refrigerators — can be accomplished by implementing the Kigali Amendment, which requires that countries replace HFCs with climate-friendlier coolants while also creating an opportunity for simultaneous efficiency improvements through other policies and standards. The amendment is a recent addition to the Montreal Protocol, a landmark treaty from the 1980s that saved Earth’s ozone layer by phasing out ozone-destroying chlorofluorocarbons, or CFCs, once widely used in cooling as well as packing materials and hairspray. While the HFCs that eventually replaced CFCs don’t destroy ozone, they do destroy our climate, hence the need to update the treaty to eliminate the use of HFCs.

Cleaner substitutes for HFCs already exist. Chief among them are hydrofluoroolefins, or HFOs, which are already being used in more than 70 million vehicle air-conditioning systems and have a climate impact on par with carbon dioxide. Meanwhile, carbon dioxide itself, first used in refrigeration more than a century ago, is poised to make a comeback on the commercial refrigeration scene.

If fully implemented, the HFC phaseout required by the Kigali Amendment would help humanity avoid up to 0.4 degrees C (0.72 degrees F) of warming this century, making it “the single biggest mandatory piece of climate mitigation the world has ever gotten,” Zaelke said. But while the treaty entered legal force in 2019, it is still a long way from universal adoption. Despite enjoying rare bipartisan and industry support (American companies are well positioned to become major HFO producers), President Trump has inexplicably failed to send it to the Senate for ratification. If elected, Joe Biden has already committed his administration to embracing the plan.

The benefits of the Kigali Amendment could be far greater if, in the process of switching out HFCs for greener alternatives, the industry also makes design tweaks to improve the efficiency of cooling devices — something it has done in the past while phasing out CFCs. In their recent report, Zaelke and his colleagues estimate that the combined effect of the HFC phaseout and efficiency improvements could amount to 460 billion tons of avoided CO2 emissions over the next 40 years, representing about eight years of global greenhouse gas emissions at current levels. Doubling the energy efficiency of air conditioners worldwide could also save nearly $3 trillion dollars in electricity costs by 2050, according to the International Energy Agency.

Renewables didn’t cause California’s blackouts. So what did?

“There’s a lot of energy efficiency you can still pump out of air conditioning and refrigeration systems,” said Kristen Taddonio, a senior climate and energy advisor at IGSD. The transition from HFCs to cleaner coolants presents a great opportunity for manufacturers to increase efficiency, Taddonio said, “because when you do that your engineers go back to the drawing board.” Minimum energy performance standards, voluntary labeling schemes like the EPA’s Energy Star program, and government procurement programs for energy efficient appliances can all help the process along, encouraging the cooling industry to put more efficient products on the market as Kigali is being implemented.

Governments also need to deal with all of the HFC-filled refrigerators and air conditioners out in the wild, which are expected to store the equivalent of 64 billion tons of carbon dioxide by 2050. While the Kigali Amendment phases out the production of new HFCs, it doesn’t address emissions of HFCs from leaks or during appliance disposal. Nor has enforcing regulations around AC and refrigerator leaks been a priority in the U.S.: According to a 2019 report by the Environmental Investigation Agency, a typical supermarket refrigeration system leaks up to 25 percent of its coolant each year. And without any federal requirements to ensure proper end-of-life disposal of refrigerators and air conditioners, the coolant circulating inside them, as well as replacement canisters used for repair and the chemicals used as insulating foams, often “winds up in landfills, where eventually it gets into the atmosphere,” Taddonio said.

While we wait for government action on HFCs, we can reduce demand for air conditioning by designing buildings and cities that stay cool naturally. Simple measures like planting more trees and painting roofs white can go a long way toward reducing the so-called urban heat island effect, the process by which dark pavements and rooftops and heat released from and (ironically) air conditioners cause city temperatures to swell to several degrees hotter than the surrounding countryside. “If you use a cool roof on any building that’s air conditioned, you reduce the solar heat gain for that building,” said George Ban-Weiss, an associate professor at the University of Southern California who studies the urban heat island effect. “That reduces your need for air conditioning.”

Retrofitting buildings and designing new ones to stay cool through, for instance, optimizing the placement of windows to reduce heat entry, can also help. So can new cooling systems like the experimental “Cold Tube” researchers recently tested outdoors in hot and humid Singapore, which uses chilled water to absorb thermal radiation from people who stand near it, helping them cool off.

Fixing cooling isn’t just a climate issue, but also a climate justice one. During the recent California heat wave that forced rolling blackouts, cooling devices accounted for close to 20 gigawatts of demand, more than double their normal load of 9 gigawatts, according to data Taddonio shared from the California Energy Commission. While those devices were distributed across the state, it’s often low-income communities and communities of color who are most impacted by planned power outages. “Every time there is a heat wave, demand goes up, and then the way you would try to avoid major blackouts is you do curtailment, and usually it’s those disadvantaged communities who end up paying the price,” says Roshanak Nateghi, an assistant professor of industrial engineering at Purdue University.

Those same communities are already disproportionately threatened by heat waves because their neighborhoods tend to have fewer trees, experience more severe heat island effects, and often contain older and less energy efficient buildings. “In many cases it’s the wealthier communities that have the tree-lined streets and a ton of green space,” Ban-Weiss said. “And that makes for disparities in comfort.”

Ensuring everyone has access to clean, efficient cooling will go a long way toward helping the world become more climate resilient. Dialing down the heat on the streets by adding green space and retrofitting homes, meanwhile, will ensure that when the next heat wave does strike, the most vulnerable populations will be better equipped to withstand a brief power outage.

“I would also note that the passive cooling strategies, generally speaking, decrease AC use,” Ban-Weiss said. “So they may actually prevent the blackouts.”