What if net-zero isn’t enough? Inside the push to ‘restore’ the climate. 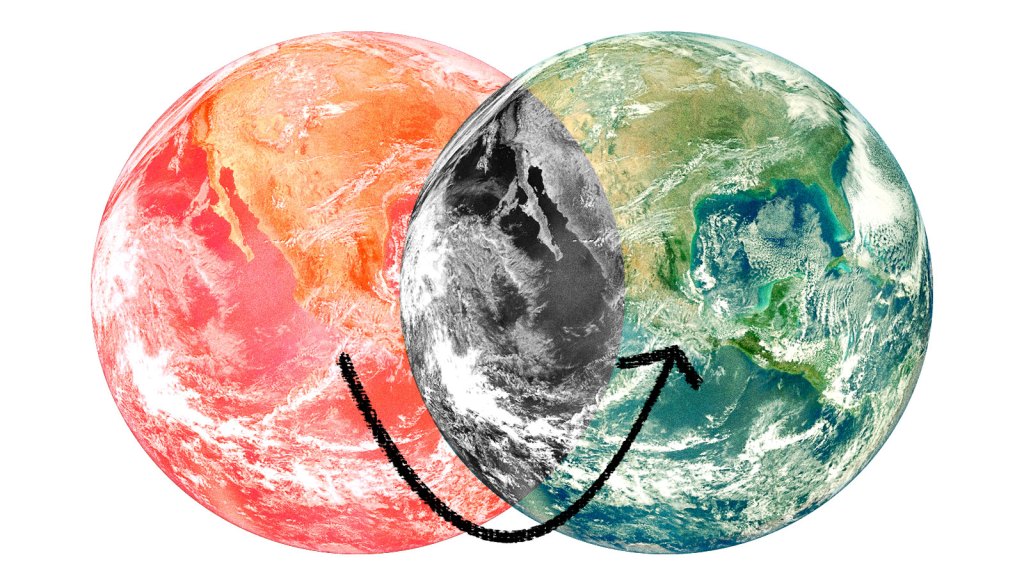 What if net-zero isn’t enough? Inside the push to ‘restore’ the climate.

Disagreements about how to tackle the climate crisis abound, but in 2020, it seemed much of the world finally reached consensus about at least one thing: getting to net-zero by 2050, or sooner. Net-zero is a state where greenhouse gases are no longer accumulating in the atmosphere — any emissions must be counterbalanced by sucking some carbon out of the air — and this year, a tidal wave of governments, businesses, and financial institutions pledged to reach it.

But for a new movement of young activists, the net-zero rhetoric is worrisome. “Hitting net-zero is not enough,” they wrote in a letter published in the Guardian last month. Instead, the group behind the letter, a youth-led organization called Worldward, urges the world to rally around a different goal, one they call “climate restoration.” The letter was co-signed by prominent climate scientists James Hansen and Michael Mann, in addition to writers, artists, and other activists.

“The climate today is not safe,” said Gideon Futerman, the 17-year-old founder and president of Worldward, who lives in a suburb north of London. “Millions of people are suffering and millions more will.” By the time net-zero is achieved, he said, the climate will be considerably more dangerous.

He’s right. A new comprehensive report on climate change and health published last week in the medical journal the Lancet found that there has already been a 50 percent increase in heat-related deaths in the past 20 years. It warned that up to half a billion people could yet be displaced by sea-level rise, and that wildfire risks and threats to food security will grow. “Restoration is about removing the CO2, which is causing these problems, and starting to reverse those issues,” said Futerman.

Climate restoration, as Futerman defines it, has three components: reducing greenhouse gas emissions, actively removing carbon from the atmosphere to offset any remaining emissions, and then continuing to draw it down, so that the concentration in the atmosphere begins to decline, “restoring” an earlier version of the climate. In other words, Worldward — a portmanteau of “world” and “forward” or “onward” —wants to get to net-zero, and then keep going.

The group does not advocate for a specific temperature goal or atmospheric concentration of carbon — Futerman said that’s a societal decision — but roughly, they want society to aim for somewhere close to pre-industrial levels.

After a soft launch this spring, Worldward now has nearly 100 volunteers from all over the world, including Mexico, India, and Zimbabwe, according to Futerman. On Monday, December 14, they are planning a more public launch of their campaign to pressure governments, companies, and other organizations to take “meaningful action toward restoration.”

Worldward did not invent the term “climate restoration,” which is also sometimes referred to as “climate repair” or “drawdown.” Hansen, the climate scientist, has long called for reducing levels of atmospheric carbon down to 350 parts per million. The climate advocacy group 350.org took its name from Hansen’s work.

But what’s unique about Worldward is that it’s one of few climate activist organizations that even talk about, let alone focus on, “negative emissions technologies,” or methods to remove carbon from the atmosphere. The umbrella of carbon removal includes nature-based solutions like forestry, wetland restoration, and farming practices that sequester more carbon in the soil. There are also technological solutions like machines that capture carbon directly from the air. Then there are techniques that are somewhere in between, like “enhanced weathering,” which involves grinding down minerals and spreading them out on the ground where they bind with carbon from the atmosphere.

Scientists who model climate solutions say we don’t have a choice — we will need to employ carbon removal, and likely at a momentous scale, to maintain a livable planet. A 2018 report by the United Nations’ Intergovernmental Panel on Climate Change found that the world might need to remove up to 1 trillion tons of carbon by the end of the century if it hopes to avoid more than 1.5 degrees C (2.7 degrees F) of global warming.

Activists’ reticence around carbon removal is likely due to its close relationship with carbon capture technologies that suck up carbon emissions directly from the source, like the smokestack of a power plant or industrial facility. Many climate groups oppose carbon capture because it could extend our reliance on fossil fuels, and because thus far, the carbon dioxide captured from smokestacks has mostly been used to help pump more oil out of the ground. Last year, more than 600 U.S. environmental organizations, including more than 30 chapters of 350.org, penned a letter to Congress stating that they “vigorously oppose” any legislation that promotes carbon capture and storage.

Negative emissions technologies come with a similar risk — they could allow companies to continue with business as usual and keep on emitting, assuming they can remove that carbon from the atmosphere in other ways. Fossil fuel giants like Occidental and Chevron are already investing in direct-air capture. But scaling up carbon removal to the level the IPCC suggests implies scary trade-offs, which will get even scarier if they are used to make up for continued emissions.

Reforestation can encroach on arable land, threatening food security. Direct air capture requires a lot of energy — by one estimate it could consume as much as half of today’s global energy demand by 2100. And enhanced rock weathering would involve major new mining projects. Which solutions we deploy, and to what extent we rely on them, will have consequences for future generations.

Futerman said one of Worldward’s goals is to get young people, who will have to live with these consequences, involved in conversations about them now. “Our aim is just to promote discussion in society,” he said. “We try to foster all different perspectives on restoration and not approach it from the right or left.”

Education is a major focus for the group. Worldward is planning training programs, webinars, and a YouTube series, and developing resources to give to teachers to use in schools. Right now, the phrase “carbon removal” is barely on the public’s radar — a recent poll by Morning Consult found that 73 percent of U.S. adults have either heard “not much” or “nothing at all” about carbon removal practices or technologies.

Holly Jean Buck, an assistant professor at the University of Buffalo and the author of the book After Geoengineering: Climate Tragedy, Repair, and Restoration, told Grist there’s a need for more people in the climate movement to be engaging with the difficult questions around carbon removal and getting involved in shaping how it should be deployed. (Carbon removal is often considered to be a type of geoengineering.) Since the banner of “climate restoration” raises expectations for what can be accomplished, Buck said it’s especially important that the conversation be grounded in science and acknowledge the challenges involved.

What kind of restoration is possible?

There are immense hurdles to just achieving net-zero and limiting global warming, let alone reversing it. Even ignoring political challenges, many negative emissions technologies are untested or in early stages, and today, most are far too expensive to be deployed at anywhere near the scale required.

But, suppose we did invest heavily in these solutions and could deploy them rapidly, even going “beyond net-zero,” as Worldward hopes. What kind of restoration could we expect?

Kim Cobb, a climate scientist at the Georgia Institute of Technology, told Grist that some of the impacts we associate with climate change, like extreme heat and extreme precipitation — phenomena that are closely linked to temperatures at the surface of the earth — could improve. But there will likely be thresholds we’ve already crossed by that point that are irreversible. Global warming changes fundamental aspects of ecology, topology, and the way water moves and is held by the land. Processes like desertification and coral reef die-offs may not be reversible on a human timescale. “Even if you dial the knob back, you may not recover that ecosystem, that kind of water storage behavior, those kinds of rainfall patterns,” said Cobb.

While she couldn’t offer firm predictions about which negative aspects of climate climate change are reversible, there is one she’s certain is not: sea-level rise. Even if we bring atmospheric carbon back to pre-industrial levels, there is already so much heat stored in the world’s ice sheets that models suggest they will continue to melt for centuries to come.

That being said, Cobb still thinks climate restoration is an important framing. “We’re already seeing that this is a potentially unlivable climate,” she said. “I sincerely hope that we’re aiming for something better than climate stability.” She also wants people to begin to talk about and understand what’s on the other end of that — which aspects of life on earth could realistically be restored, and on what timescale.

Buck agreed that as long as it’s made clear that “restoration” is more of a compromise and not a total return to past conditions, climate restoration could be a more compelling message than “net-zero.” Framing things in terms of carbon emissions, as net-zero does, “is really reductive and doesn’t get to all the dimensions of the problem,” she said, “and is also not very inspiring.”

Futerman acknowledged that it’s unclear how much restoration will be possible, and described the objective as more of a moral imperative. “Worldward promotes the idea of restoring the climate,” he said, “and wants to educate on possible ways, and the pros and cons of each, allowing for a broader conversation in how to best carry out restoration.”

Correction: An earlier version of this article misidentified the university where Kim Cobbs is a professor as University of Georgia.