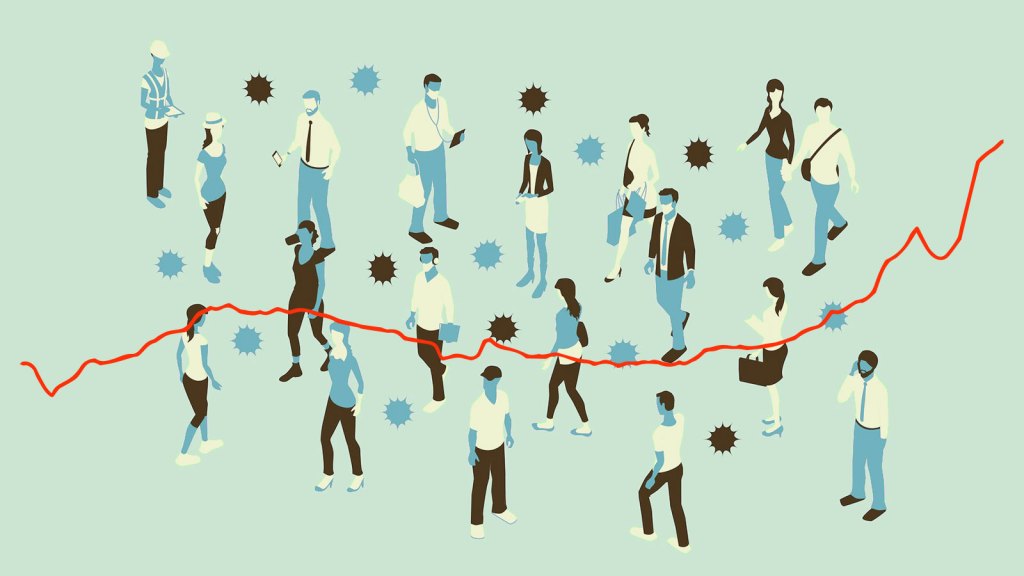 Susanne Moser remembers exactly when the global death toll from the coronavirus passed 100,000. It was April 10, Good Friday, and for the Massachusetts-based researcher, the rising deaths around the world — combined with the Catholic holiday commemorating the death of Jesus — brought on a profound feeling of grief. But now, as the United States reels from  200,000 new COVID-19 cases daily, the rising numbers don’t mean quite as much.

“It’s just become part of my daily life,” Moser said. “I don’t have the same emotional response of grief and sadness as I did in the early days.”

Many people feel the same way. Google searches for “coronavirus” and “COVID-19” peaked in the spring and have been on a downward trend ever since. Research published last month from scientists in the United Kingdom and Italy found that online comments and interest in the pandemic declined rapidly after the initial lockdowns in March, even as caseloads continue to rise in the U.K., U.S., and Canada. And a recent Pew poll found that while 57 percent of Americans were following news about the COVID-19 crisis “very closely” in March, just 37 percent were doing so by mid-October.

Psychologists say that the falloff in attention, however horrifying the news, makes a lot of sense. Over time, people simply become desensitized to fear, death, and trauma. This phenomenon is known as “psychic numbing,” and it can help explain why record fires, floods, and hurricanes have started to feel commonplace in the age of climate change, and why — despite more than 3,000 Americans died from COVID-19 on Wednesday alone — some are tuning the pandemic out. “You start to get numb, and you don’t worry as much anymore – even if there’s still a reason to worry,” Moser said.

Getting used to things is just what humans do. It’s what has allowed most of us to get through the constant upheavals and wild news of 2020. But for severe, global problems, psychic numbing can have dangerous implications. It could mean that we ignore the roughly 250,000 people estimated to die annually of climate change-related causes by 2030; or that, in the age of COVID-19, people start to forget about the pandemic, flout social distancing rules, and spread the disease.

Paul Slovic, a professor of psychology at the University of Oregon, has been studying psychic numbing for decades — trying to understand why people disconnect from horrific problems like pandemics, genocides, or climate change. “The difference between no one at risk and one person in danger is huge,” he said. “But if I told you there were 87 people in danger in some situation, and then said ‘Oh no, it’s actually 88’ — you wouldn’t feel any different.” At higher numbers, concern can even disappear entirely; as Slovic summarizes, “The more who die, the less we care.”

Plenty of research has backed this up. In a 2014 study, Slovic and other researchers found that people were willing to donate more money to a single hungry child than they were to two hungry children – and their compassion faded even more for eight children. In a similar 2007 experiment, one group of people was shown a picture and description of a 7-year-old girl in need. Another group was shown the same picture and description, but also told that there were 3 million other children starving in the region. For the second group, donations fell by half.

There are a few psychological dynamics at play here. First, humans struggle to comprehend large numbers — we’re terrible at grasping things like exponential growth and compound interest. It’s easier to understand a problem facing a single person. But people also disconnect when they feel they can’t make any difference in the issue at hand. Slovic said that in the experiment with the 7-year-old girl, “people didn’t feel as good about helping this child when they realized there were a million other children they weren’t helping.” Similarly, in a study conducted after the 1994 Rwandan genocide, subjects were less willing to send the same amount of aid to a refugee camp of 250,000 than they were to a refugee camp of 11,000.

The same phenomenon may be at work in reactions to COVID-19. Most people can’t intuitively fathom the difference between 10,000, 100,000, or even 300,000 lost lives. As the numbers get bigger, scientists and media outlets reach for increasingly catastrophic comparisons: a 9/11 every single day. Twice the number of U.S. service members killed in World War I. But faced with such catastrophic numbers, people might start to think that anything they do — wearing a mask, washing hands, avoiding family gatherings — won’t make much of a dent.

This concern is familiar to those who study climate change. Researchers have long worried that the steady drumbeat of climate disasters may, paradoxically, cause people to lose interest. “You can only take in so much,” said Moser, who studies climate change communication. “If in one year we had a huge fire, floods in the Midwest, several hurricanes hitting the East Coast and the Gulf … I think it would be very difficult in that context to still feel as horrified about the last death as about the first death.” Add in the fact that it’s basically impossible for any one person to influence what happens to the temperature of the planet (except for perhaps Greta Thunberg and some presidents and prime ministers), and climate change seems to be a recipe for apathy and denial.

That’s not to say that going numb is always a bad thing. Moser says that numbing can be adaptive – a way for people to work, exercise, and spend time with friends and family without emotionally falling apart. “We just can’t function if we’re constantly on high alert,” she explained. Moser recommends that people take targeted breaks from the news media when they start to feel numb or overwhelmed. “When so many people have died the most appropriate thing to feel is grief,” she said. “If you can no longer feel grief or sadness then you need to take a timeout, and I’m not sure that space ought to be filled with more news.”

Slovic says that there are also ways to combat psychic numbing. Members of the media can highlight individual stories, instead of overall numbers, thus activating the more emotional side of the brain. And mere understanding of numbing, he argues, can help people shake themselves out of an apathetic state. “The first step is awareness,” he said. “To make people aware of the way our minds lead us to do things that may contradict our values” — like ignoring COVID-19 restrictions to fly across the country, or dismissing mask regulations as overkill.

Back in 2000, a University of Oregon sociologist named Kari Norgaard spent several months in a rural village in western Norway, studying how the residents responded to an unusually warm winter that was a clear harbinger of climate change. But even though the Norwegians knew about global warming, Norgaard argued that they lived in a kind of “double reality,” both accepting — and almost completely ignoring — the melting ice caps and disappearing snow. They spent their days, she wrote, “thinking about more local, manageable topics.”

As the pandemic turns one year old this month, many Americans have learned to live in a similar “double reality”: accepting the presence of COVID-19 while still, as much as possible, going about their daily lives. It’s a sign, Moser says, of what we might see as the Earth’s temperature continues to rise. “Climate change is going to be with us for the rest of our lives,” she said. “How are we going to stay alert and respond effectively to something that is stuck with us for so long?”