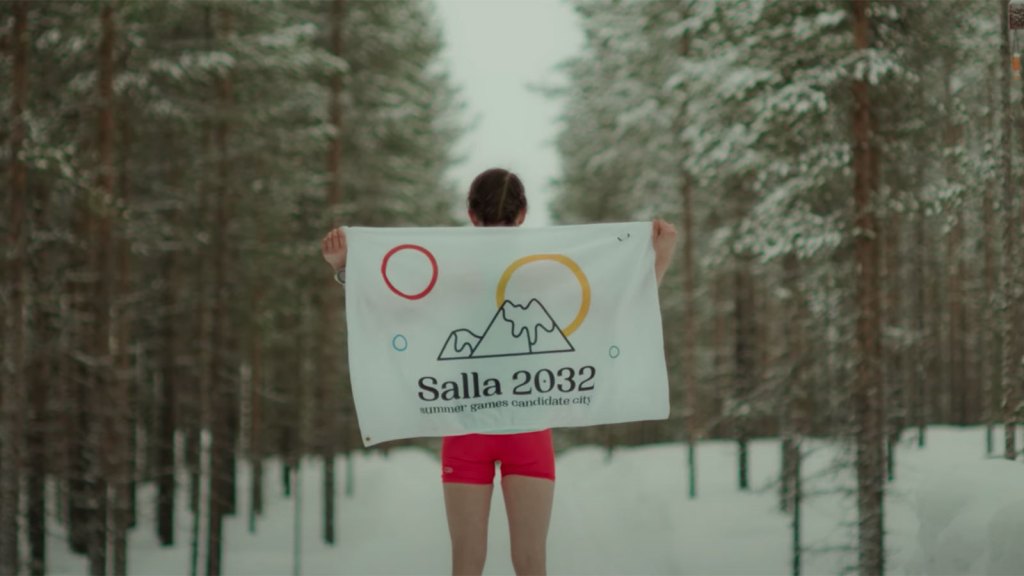 Save Salla
salla forth

A tiny town in the Finnish Arctic — the self-proclaimed coldest town in Finland — is bidding to host the 2032 Summer Olympics.

Yes, you read that right: Salla, a town of 3,396 people and an annual average temperature just below freezing (31.6 degrees F), is competing with Jakarta, Istanbul, and Seoul to host Olympic sports like track and field, swimming, and cycling. The satirical bid, complete with a press conference and promotional video, was announced this week in collaboration with Fridays for Future, the climate advocacy organization founded by Greta Thunberg.

The promotional video shows residents of Salla doing summer sports in the middle of a snow-covered winter landscape — a man applying sunscreen and surfing on a frozen waterfall, women playing beach volleyball amid snowdrifts, a shirtless man being pulled on water skis by a reindeer. “No more slippery ice,” says one sardonic skateboarder, “thanks, global warming.” Another man, bathing in a frozen lake with an ice cream cone, speculates on what Salla will look like in 2032. “In 12 years, the ice will be gone and this will be a perfect lake,” he says in voiceover. Salla’s proposed Olympic mascot is Kesa, a reindeer who appears to be suffering from heatstroke. The official website of the town’s Olympics bid claims that the Salla has two reindeer for every person.

“We liked the idea because we are concerned about climate change and also because we live here in the Arctic Circle and we see the changes that are happening,” Salla’s mayor, Erkki Parkkinen, told the Guardian, “We want the winters to be like they used to be, real winters.”

The campaign emphasizes the particular vulnerability of Salla, and the Arctic as a whole, to climate change. Temperatures in the Arctic are rising at double the rate of the global average, and hit an all-time recorded high this past summer of 100.4 degree F. The Arctic also faced an unprecedented wildfire season in 2020. Many of these wildfires burned in carbon-rich peatlands, producing record-breaking carbon emissions. Some of the peat fires were “zombie fires” that smoldered under snow and ice all winter and then reemerged in the summer.

Salla isn’t the first place to make an eye-catching bid for climate awareness — in 2009, the Maldivian cabinet hosted an underwater press conference to draw attention to the impacts of rising seas on small island nations, and in 2019 Swiss activists held a funeral for the disappearing Pizol glacier. And though hope and fear are often the emotions discussed when it comes to effectively communicating about climate change, humor is also a powerful tool. Studies have shown that satire can help engage audiences on climate, and increase their intentions to participate in climate change activism.

The 2032 Olympics aren’t too far off from an important climate deadline. A 2018 Intergovernmental Panel on Climate Change report projected that the earth will reach 1.5 degrees C (2.7 degrees F) of warming between 2030 and 2052, and that greenhouse gas emissions need to be halved from 2017 levels by 2030 in order to prevent the worst impacts of climate change. Parkkinen referenced the fast-approaching timeline of both the 2032 Olympics and necessary climate action in a statement. “If we haven’t succeeded in halting climate change by then, it is too late,” he said. “We want to keep Salla as it is, and our winters cold and full of snow.”