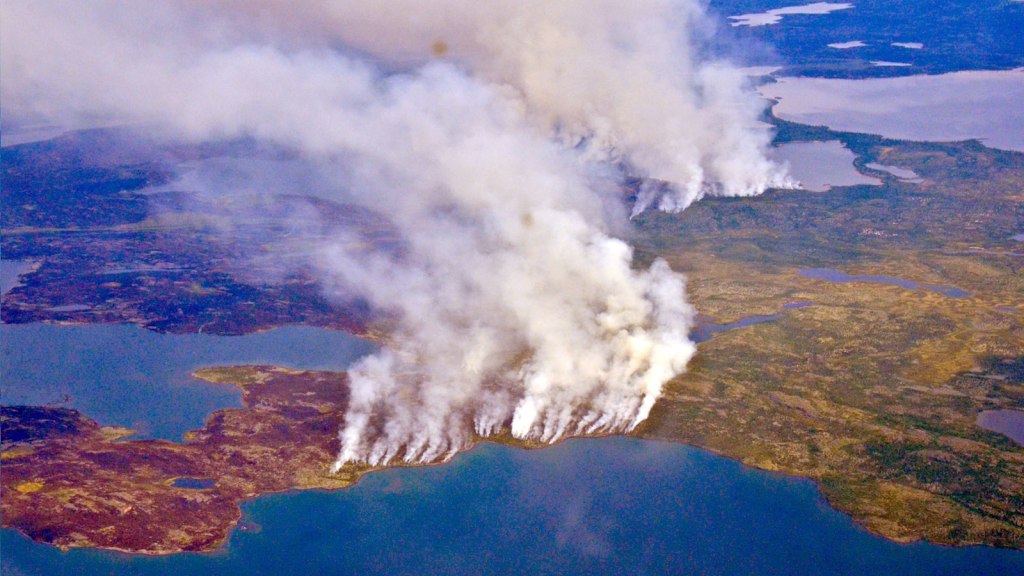 Rising temperatures contributed to runaway wildfires in the Arctic in 2019. NASA
icy hot

Life in the small town of Verkhoyansk, Russia, has always been extreme. In the Siberian winter, temperatures can plummet to -90 degrees Fahrenheit — so cold that it’s dangerous to wear metal-framed glasses. In the summer, temperatures usually hover around a comfortable 69 degrees. But residents of the isolated village just north of the Arctic circle recently experienced something unprecedented even for them: Scorching summer heat of 100.4 degrees Fahrenheit.

That temperature has yet to be given the official stamp of verification by scientists, but it will likely set a new record, blowing way past the June average high of 68 degrees. If confirmed by the World Meteorological Organization, it will be the hottest temperature ever recorded in the Arctic circle.

For months, the Arctic has been gripped by a prolonged heat wave that has already triggered wildfires and swarms of tree-eating moths. Other towns in Siberia have also seen records shattered — Khatanga, Siberia, well north of the Verkhoyansk, had temperatures of 78 degrees Fahrenheit on May 22, a mere 46 degrees above average.

A severe heatwave is affecting the #Arctic circle

It’s all part of the larger trend of climate change. As global warming accelerates, the Arctic is heating up two to three times faster than the rest of the planet. According to the National Aeronautics and Space Administration, the earth as a whole has warmed about 1.44 degrees Fahrenheit over the past 40 years; the Arctic has warmed by about 3.5 degrees over the same stretch.

Judah Cohen, a scientist at the Boston-based firm Atmospheric and Environmental Research, said that difference is mostly a result of melting snow and sea ice. Normally, the dazzling whiteness of ice and snow reflects the sun’s rays, creating a cooling effect, but as warming temperatures melt that protective layer, the Arctic gets hotter and hotter. “You have much lower reflectivity, so much more solar radiation is being absorbed in that Arctic region,” Cohen said.

The heating of the Arctic also has worrisome knock-on effects. Permafrost — ancient, normally frozen Arctic soils filled with organic carbon — has started to melt, releasing tons of carbon dioxide into the atmosphere. If that trend continues, the planet may hit one of its dangerous tipping points, where the climate system will be changed for good.

Arctic heat can also weird out weather patterns all over the planet. The fast-moving river of air known as the polar jet stream, which oscillates around the Northern Hemisphere at up to 275 miles per hour, is normally driven by huge temperature differences between lower latitudes and the poles. But as the poles warm up, the stream can get weaker, or wobble out of place, shooting unexpected bursts of cold or warm air north or south. Some scientists argue that this weakening also jostles the polar vortex, causing freezing temperatures during the Northeast winters.

Cohen said that in the summer, the jet stream can get split in two, trapping warm air at high latitudes and causing persistent heat waves, like the one currently plaguing Siberia. “It becomes very favorable conditions for getting a weather system that’s kind of stuck in place,” he said. As climate change intensifies, areas of the Arctic circle may see more mind-boggling heat waves.

For now, children in Verkhoyansk are swimming in nearby lakes — and enjoying temperatures more common in Miami Beach than Siberia.