In late March, approximately a third of the world’s population found themselves under some kind of stay-at-home order due to COVID-19. The effects were dramatic: Virtually overnight, bumper-to-bumper traffic gave way to empty roads; bustling airports became echoing ghost towns; retail stores and restaurants closed their doors and turned off the lights. And some started wondering whether the coronavirus pandemic — and the abrupt halt in all those normal, fossil fuel–burning activities of life — would have a lasting effect on the overheating planet.

Now, as 2020 draws to a close, scientists have an answer — of a sort. According to the latest data from the Global Carbon Project, worldwide carbon dioxide emissions declined by around 7 percent this year, or 2.4 billion metric tons. That’s roughly equivalent to all of India’s CO2 emissions in a normal year, and is the biggest absolute drop in emissions ever.

There’s a lot of ways to think about this history-making cut. One, of course, is that a global pandemic — which has killed over 400,000 people and plunged many countries into a deep recession — is probably one of the absolute worst ways to drive down emissions. Another perspective is that in the big scheme of things, bringing emissions down 7 percent is really, really small potatoes compared to what we need to do to stop warming. (To actually halt the progress of climate change, we need to cut emissions by 100 percent.)

Zeke Hausfather, a climate scientist at the Breakthrough Institute, is one researcher who believes that 2020 may be a sign of things to come. According to Hausfather, rapid drops in the prices of renewable energy have been driving coal out of the energy market and decreasing emissions at the same time. Over the last 10 years, the cost of solar electricity has dropped by 89 percent; the price of onshore wind dropped 70 percent. It’s now cheaper to invest in renewables than coal in every single one of the world’s energy markets.

All that growth in renewables means that the economy is now decarbonizing faster than it grows. Modelers who once expected CO2 emissions to peak sometime around 2025 now say that the pandemic could have accelerated the timeline. “What would have been a peak in the mid-2020s may be pushed back to 2019,” Hausfather said. The International Energy Agency now projects that emissions reached their apogee in 2019, as does the Bloomberg New Energy Foundation. 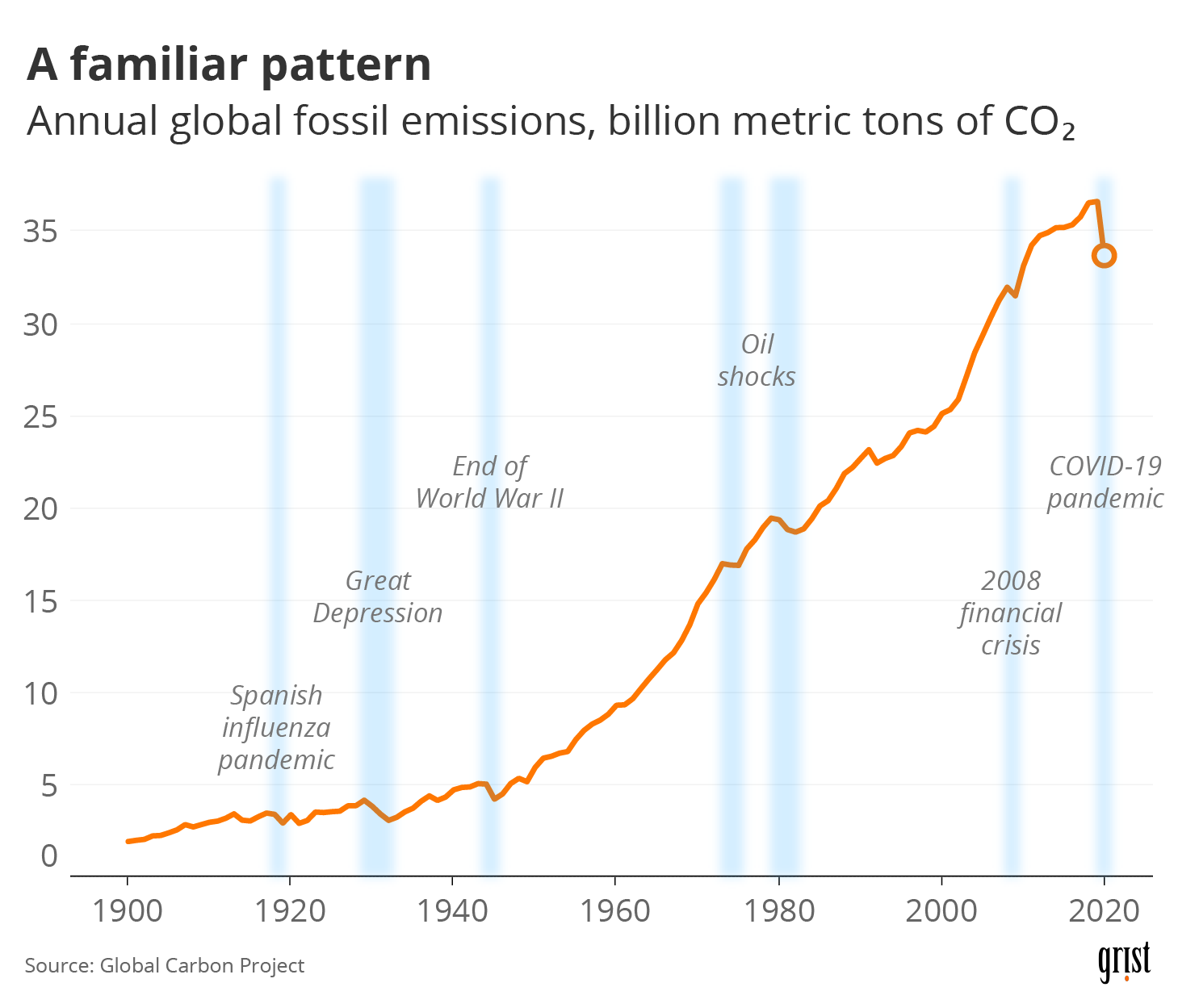 That would represent a fundamental break with history. For the past hundred years, the only things that have made a big difference for CO2 emissions are crises like COVID-19 — moments that have disrupted the economy, caused tens of millions of deaths, or otherwise destabilized the world. But historically, those drops in emissions have also been notoriously short-lived, with no “peak” emissions in sight.

In 1918, at the height of the Spanish flu pandemic, CO2 emissions fell by almost 14 percent, only to resurge by 15 percent the following year. Similarly, in 2009, with hundreds of millions of people unemployed across the globe due to the global financial crisis, carbon emissions plummeted by 480 million metric tons. In 2010, however, they rebounded — growing by a whopping 1.65 billion tons. A graph of emissions since 1900 looks as steep as a black diamond ski slope: rising and rising and rising, with only occasional bumps along the way.

That history explains why some researchers are skeptical that emissions have truly peaked. “I think it’s too early to tell,” said Rob Jackson, a professor of earth system science at Stanford University and a leader of the Global Carbon Project. “We will only know when world economies recover.” Jackson points out that the emissions of China, the biggest CO2 polluter in the world, have already bounced back to 2019 levels. If other countries get the virus under control, they could follow suit. Glen Peters, a research director at the Center for International Climate Research in Oslo, Norway, said over email that he was initially hopeful that 2019 would be the peak of emissions. “Now,” he said, “I am getting a little worried.”

There are signs that some countries are trying to subvert the typical crisis-rebound pattern of emissions. In July, the European Union approved the largest green stimulus plan in history, promising to funnel $572 billion to electric cars, renewable energy, and agriculture. The recent U.S. coronavirus relief bill also earmarked $35 billion for clean energy research and development, including funds for carbon capture and storage, nuclear energy, and renewables. Similar actions around the world might be enough for global emissions to flatten out, hovering around 2018 levels for the next decade or so.

Even decreased emissions, of course, won’t stop warming. The atmosphere is like a leaky bathtub, and as long as people continue to dig up and burn fossil fuels, the amount of carbon dioxide in the atmosphere will continue to rise, warming the planet by around 0.2 degrees C (0.4 degrees F) every 10 years. But, as Hausfather said, “Peak emissions are in many ways the first and easiest step towards getting to zero.” The next, and most difficult, step: actually cutting emissions all the way to zero.