For over a decade, the U.S. federal government has failed to pursue major action on climate change, leaving most of the hard work of cutting carbon emissions to individual states. But even without national leadership, many states are succeeding at slashing emissions — and fast.

According to a new report from the World Resources Institute, an international research organization, 41 states managed to cut their carbon emissions between 2005 and 2017, even as their economies grew. (State-level emissions data usually takes more than two years to be reported by the U.S. Energy Information Administration, making 2017 data the latest available.)

The states leading the charge might not be the ones you expect.

The state that cut emissions the most wasn’t Washington, where Governor Jay Inslee has cooked up ambitious climate plans that have been partially adopted by Democratic presidential nominee Joe Biden. Nor was it California, which is famous for strict fuel efficiency standards, one of the world’s largest cap-and-trade programs, and the long tenure of environmentalist former Governor Jerry Brown.

No, the most significant cuts in carbon emissions came from Maryland, with New Hampshire, Washington, D.C., and Maine following closely behind. 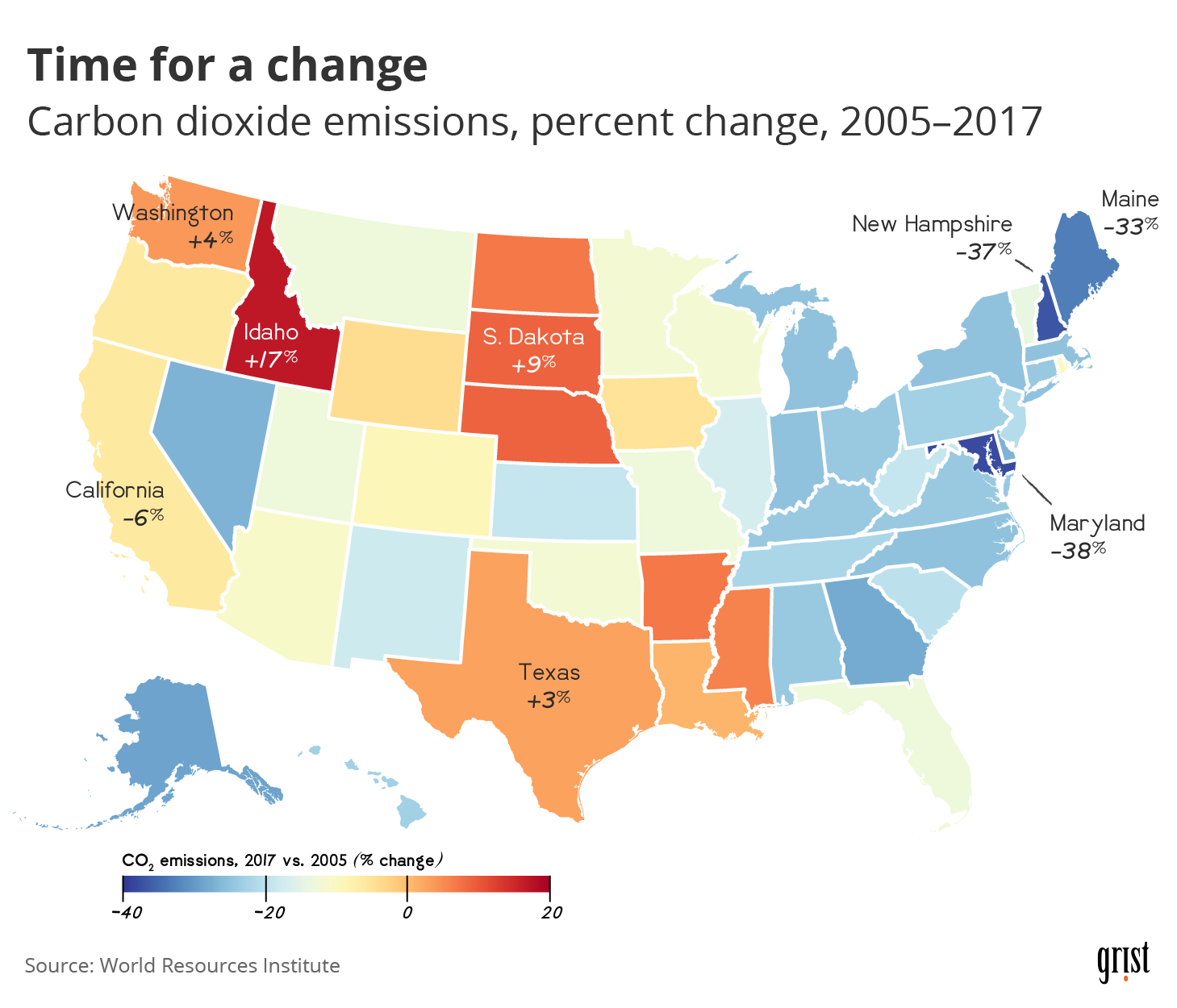 According to the report, Maryland cut emissions 38 percent in those 12 years, and the Northeast region as a whole cut emissions by around 24 percent. In contrast, most Western states — including Washington and California — saw their carbon emissions rise or decrease only slightly over the entire period.

Devashree Saha, one of the authors of the report and a senior associate at the World Resources Institute, said that the Northeast had several factors on its side. For one thing, many Northeastern states once used coal to power their electricity grids. In recent years, they have quickly switched over to natural gas, which produces far less carbon dioxide than coal-fired power.

The Northeast is also the home of the Regional Greenhouse Gas Initiative, an interstate agreement that caps carbon emissions from power plants in Maryland, Maine, New York, and seven other member states in the region. According to a report from the nonprofit Acadia Center, the program has reduced power plant emissions by almost 47 percent since it started 10 years ago, far outpacing the rest of the country.

But there’s more to the data than meets the eye. Saha says that some of the states that seem to be lagging behind, including California and Washington, already had fairly low carbon intensity before the study period began. (Carbon intensity is a measurement of the carbon emitted per dollar of economic growth.) In other words, the large cuts in the Northeast may reflect the ways in which it was actually catching up with states that already had cleaner electricity systems in 2005: Washington has consistently pulled a lot of power from its giant dams, and California has powered its grid off of natural gas since the early 2000s.

“Once you take into account the low-hanging fruit, then there are another series of challenges,” Saha explained.

That’s one reason why the federal government may have to step in. Even states that have seen decreases in carbon pollution will need to do much more: shifting from natural gas to renewable fuel sources, for example, and decarbonizing cars and other vehicles. That will require a more comprehensive federal policy, like big federal spending on wind and solar energy or a nationwide cap-and-trade system. Meanwhile, some states — like Idaho, Texas, and the Dakotas — still have rising emissions levels.

“It is high time that the federal government starts taking action,” Saha said.