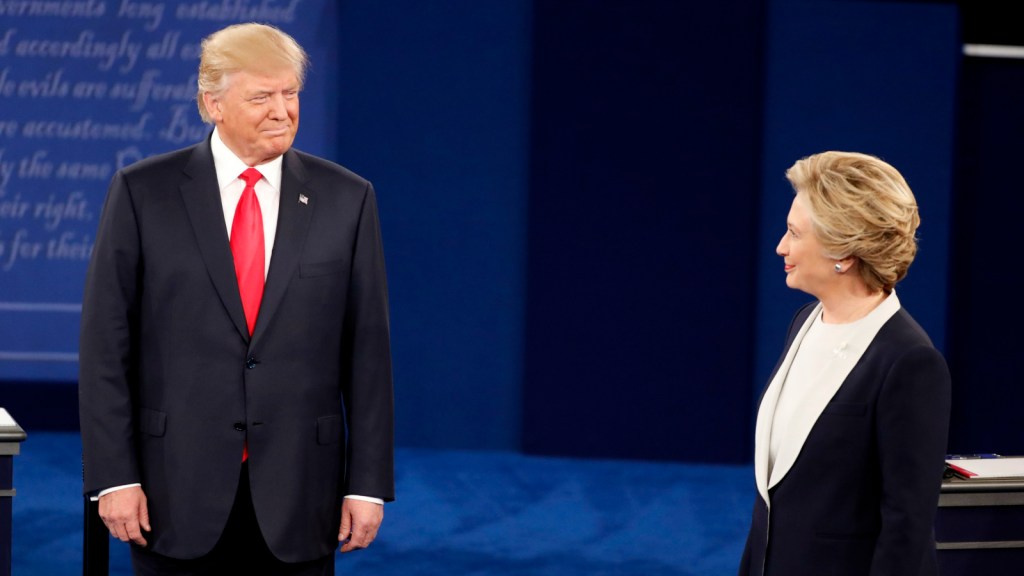 Donald Trump told a few lies about energy during the debate Sunday night, while Hillary Clinton reiterated her warm feelings for natural gas.

In the last substantive question of the town hall–style debate, an audience member asked how the candidates’ energy policies would “meet our energy needs while at the same time remaining environmentally friendly and minimizing job loss for fossil power plant workers?”

Trump went first, cramming an impressive number of false and nonsensical statements into his two-minute answer. (On the upside, he demonstrated that he now knows what EPA stands for, correctly referring to it as the Environmental Protection Agency instead of “Department of Environmental.”) Here are the highlights:

• Trump: “[E]nergy is under siege by the Obama administration. … We are killing, absolutely killing, our energy business in this country.”

In fact: Total U.S. energy production has increased for the last six years in a row. The oil and gas sector has been booming during the Obama presidency, as have the solar and wind industries. Coal companies have been struggling — but that is largely not the fault of President Obama, just as the oil boom is largely not something he can take credit for.

In fact: There is no remotely credible economic analysis to suggest that Trump’s proposals for expanded domestic fossil fuel extraction would generate enough additional tax revenue to close the budget deficit, much less pay off the existing national debt. It’s particularly implausible when you consider Trump’s massive tax-cut plans that would make both the deficit and debt considerably larger.

• Trump: “I’m all for alternative forms of energy, including wind, including solar, etc.”

In fact: Trump’s energy plan offers nothing to increase solar or wind energy production, but instead focuses on boosting fossil fuels.

• Trump: “There is a thing called clean coal.”

In fact: The hope that coal plants’ carbon emissions can be drastically reduced — either through technology that captures and sequesters the emissions or that converts coal to synthetic gas — burns eternal for the coal industry’s cheerleaders. But no one has actually significantly cut emissions at an economically viable coal plant. The promises of “clean coal” projects have not been fulfilled.

• Trump: “Foreign companies are now coming in and buying so many of our different plants, and then rejiggering the plant so they can take care of their oil.”

In fact: What is Trump trying to say with this gibberish? We have no idea. [UPDATE: E&E News seems to have figured out what Trump was talking about. When he said “plants,” he meant refineries, and he was repeating a gripe made prominently by his energy advisor Harold Hamm, an oil and gas magnate. “Hamm complained that the foreign companies converted their U.S. refineries to process ‘heavy, sour crude,'” E&E reports. “That excludes the ‘light, sweet’ crude from the Bakken shale, where Hamm’s company is the largest leaseholder.”]

Clinton’s answer was, as one would expect, more cautious and tempered. She said, among other things, that she supports “moving toward more clean, renewable energy as quickly as we can, because I think we can be the 21st century clean-energy superpower and create millions of new jobs and businesses.” And her climate and energy plan would indeed promote renewable power.

But she also made some dubious statements herself:

• Clinton: “We are … producing a lot of natural gas, which serves as a bridge to more renewable fuels, and I think that’s an important transition.”

In fact: This comment surely set many climate activists’ teeth on edge — and not for the first time, as Clinton has been saying similar things for years. Many activists strongly disagree that natural gas should be part of a plan to shift to renewables and fight climate change. Multiple studies have indicated that natural gas is no better for the climate than coal when you consider the high rates of methane leakage in natural gas production and transport. 350.org, the aggressive anti–fossil fuel group, swiftly issued a statement criticizing that comment while praising the rest of Clinton’s response.

• Clinton: “[W]e are now, for the first time ever, energy independent. We are not dependent upon the Middle East. But the Middle East still controls a lot of the prices.”

In fact: Clinton was pandering to voter ignorance with her claim that the U.S. has become “energy independent.” Though U.S. oil production is up and oil imports are down, the country is still a net importer of crude oil and petroleum products. And as Clinton herself acknowledged, global oil prices are set by global supply and demand, so we will not be disentangled from the Middle East until we stop using so much oil, regardless of where it is drilled.

Clinton, unlike Trump, did say that her energy plan includes “fighting climate change, because I think that’s a serious problem.” That was the entirety of either candidate’s nod to the “environmentally friendly” portion of the question.