BP is dumping a ton of oil … from its energy portfolio 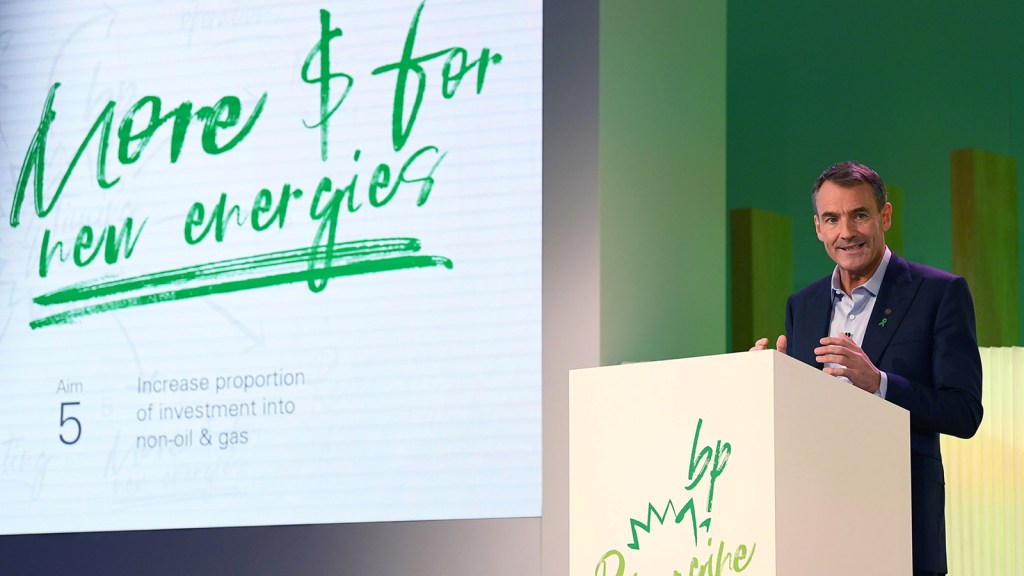 BP is dumping a ton of oil … from its energy portfolio

Back in February, in the “before times,” oil giant BP announced a major new ambition: It would become a net-zero company by 2050. Although the company was very much stretching the definition of that phrase, and it didn’t intend to stop extracting, producing, or selling fossil fuels, the goals that it identified were significant. BP said it would work to reduce the emissions created by the products it sells — and in doing so, took much more responsibility for its role in climate change than any of its peers to date.

Experts were cautiously optimistic about the plan at the time because there weren’t many details to evaluate. The British multinational had basically set a bunch of 2050 targets with no real roadmap of how it would get there. As of Tuesday morning, BP’s intentions are coming into focus with the release of near-term goals that include cutting production, ramping up investment in renewables, and limiting exploration for new oil and gas reserves.

BP laid out the details in a press release titled “From International Oil Company to Integrated Energy Company.” By 2030, the company says it expects to produce 40 percent less oil and gas than it did in 2019, which will help it achieve a 30 to 35 percent emissions reduction related to the fuels it extracts. Other goals for 2030 include installing more than 70,000 electric vehicle charging stations, developing “around” 50 gigawatts of renewable energy by 2030 (up from 2.5 gigawatts in 2019), and increasing its spending on low-carbon energy to $5 billion — about a quarter of the company’s total capital expenditure last year. Finally, BP said it would stop looking for new oil reserves … but only in countries where it doesn’t already drill.

“In the arms race of emissions announcements, most oil and gas peers have conveniently ignored the global need to produce and use less oil and gas,” said Andrew Grant, head of oil and gas at the financial think tank Carbon Tracker, in a statement. “BP’s production cut of 40% by 2030 makes them unquestionably the industry leader.”

This isn’t the first we’ve heard of BP’s intention to cut production. The drop in oil prices due to the pandemic, and the expectation that they may never fully rebound, led the company to announce a month ago that it would write down up to $17.5 billion in oil and gas holdings. That meant that some of its reserves were likely considered worthless and may never be developed. While the company now says it will achieve the 40 percent cut in production through “active portfolio management,” it’s unclear how much of it is a matter of economic necessity versus a calculated part of BP’s transition. Indeed, CEO Bernard Looney indicated they are inextricably linked when he said the write-down was “rooted in our net zero ambition and reaffirmed by the pandemic.”

Another notable, though vague, element of BP’s announcement is its plan to partner with 10 to 15 cities “in decarbonization efforts.” The company already partners with the city of Houston on its climate strategy, having donated $2 million to the city to help in its efforts to zero out its emissions by 2050. While some are concerned about the influence BP could exert on Houston’s plan, Lara Cottingham, chief sustainability officer for the city, pointed out to Vice News that in the absence of federal or state support, public-private partnerships are essential. A reminder that yes, we seem to live in a world where one of the biggest oil companies has done more to support a U.S. city’s plan to tackle climate change than our own government.

An even more mysterious element in BP’s plan is its aim to develop energy partnerships with “three core industries.” Though the announcement is peppered with references to developing its business in bioenergy, hydrogen, and carbon capture, utilization, and storage, it gave no indication of whether those are the “three core industries,” and the company declined to clarify.

Greenpeace U.K., which has criticized BP in the past for not slashing production, called the announcement a “necessary and encouraging start,” while still noting the company must go further. It’s still hanging onto its stake in the Russian oil company Rosneft, both Greenpeace and Carbon Tracker pointed out, which makes up 40 percent of BP’s total oil production.

Thanu Yakupitiyage, U.S. communications director at 350.org, was less enthusiastic about the news. “The compound crisis of COVID-19, climate, and inequity shows us that we need sustainable, resilient, and stable economic systems based on renewable, accessible, and just energy sources,” she told Grist in an email. “One clear step in the right direction is for the fossil fuel industry to pay for the damages they have caused to our climate and communities.”

While today’s announcement filled in a lot of the blanks, the company is expected to release more details on its plans in mid-September.