How do you counter fake news? Josh Fox, an Oscar-nominated and Emmy Award-winning filmmaker known for taking aim at the oil and gas industry, has been pondering that problem for years — ever since a teenage girl screened one of his documentaries about the effects of fracking, Gasland Part II, and asked him, “How do we know what’s true?”

Fox remembers looking at her, perplexed. “Well, you say all these things about how fracking is bad and how climate change is real,” the girl elaborated, “but then we can look on the internet and see that people are saying the opposite. So how do we know?”

Fox’s new one-man play, The Truth Has Changed, attempts to answer her question. The show recounts the drastic measures that Fox says the oil and gas industry has taken to discredit his work and protect its own reputation — trying to sabotage his interviews, publishing op-eds on right-wing news sites, and creating their own documentaries to counter his message.

The play documents how this approach has spread. It all starts with corporations crafting their own version of reality. The BP oil spill in the Gulf of Mexico, the Standing Rock pipeline protests in North Dakota, the Cambridge Analytica scandal — the common thread here, Fox says in the play, is that powerful corporations are stealing our data and spreading lies for their own benefit.

Despite snow, sleet, and freezing temperatures, about 50 people crammed into Fox’s small rehearsal space in Brooklyn to see the show last month, seated in rows of mismatched chairs. Fox sat on a wooden chair centerstage, surrounded by minimal props: a table with a microphone, a laptop, a notebook, and a glass of water. Two banjos stood off to the side. Behind Fox, a projector showed a portrait of a stormy sky.

I had entered the studio through a wooden trapdoor — the only way to get in without passing Fox’s living space. This was not the original show venue. Less than 24 hours before, The Truth Has Changed was canceled mid-run at the Public Theater in Manhattan after a dispute between Fox’s team and the theater’s staff. Fox claimed the theater’s staff harassed him and his team, but the Public Theater denied his claims, and a spokesperson told the New York Times that Fox had violated its code of conduct through “a series of verbal abuses to the staff.” Competing versions of reality seem to follow Fox everywhere.

So Fox made last-minute arrangements and found a temporary home for his show: the warehouse in Brooklyn where he lives, works, and rehearses. I had planned to talk to Fox after the show in Brooklyn, but the Q&A that night ran longer than expected. Next thing I knew, it was almost midnight. Fox said he needed a drink after the whole Public Theater debacle, so he invited everyone out to a bar nearby to continue the conversation. 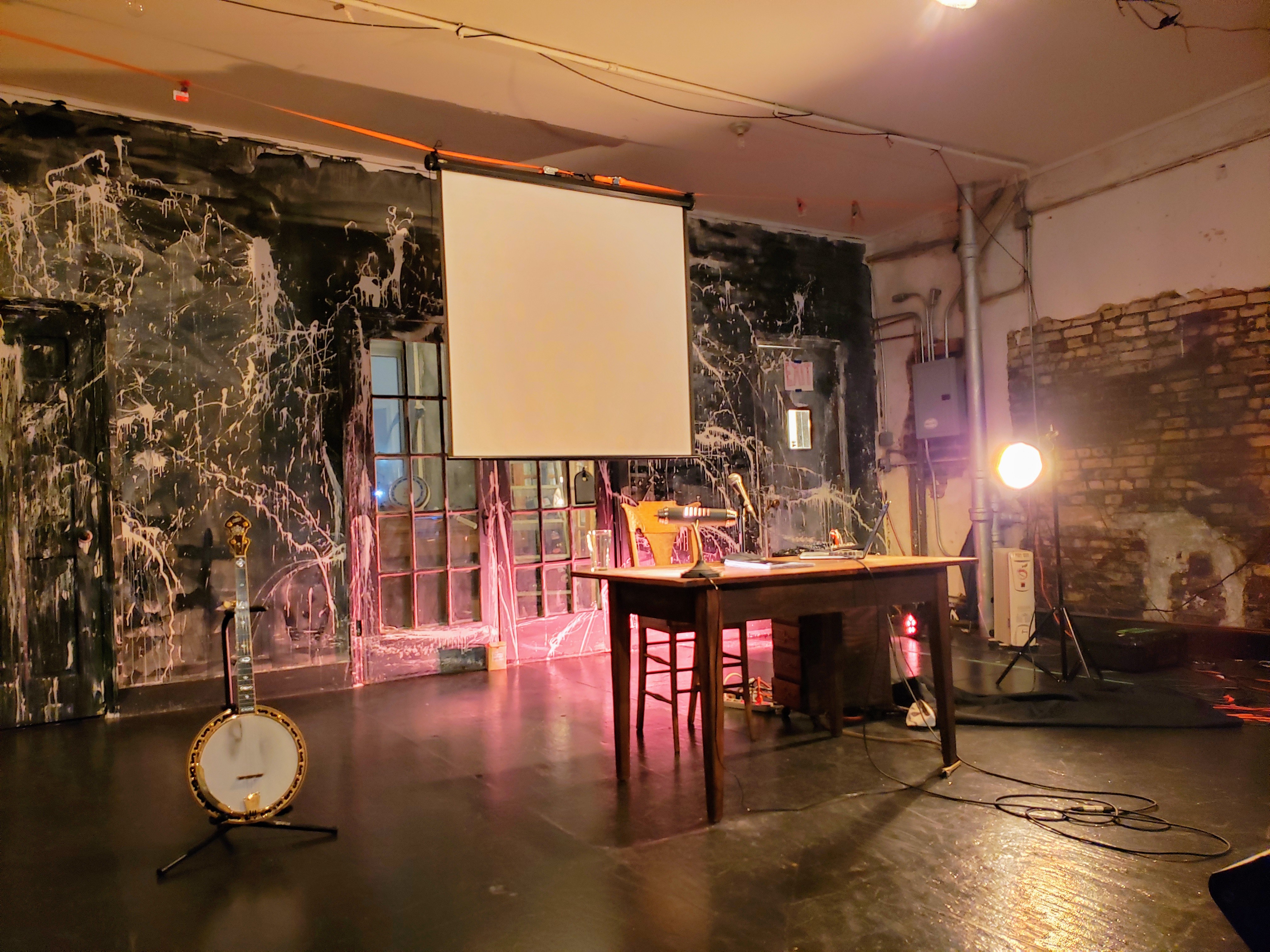 The next morning, with the snow already melted in the streets, I made the trek back to the warehouse to talk to Fox about his work as an artist and activist. We walked through the glass French doors of his rehearsal theater and sat down on couches in his living room, where the walls were decorated with posters of his old documentaries and a sign that says “Frack is Wack.”

Fox started getting involved with theater when he was 10 years old. His parents were divorced, so he would travel back and forth between New York City and Milanville, Pennsylvania. “It’s an interesting perspective to have those two different cultural mindsets,” he told me. Spending time by the Delaware River in rural Pennsylvania sparked his love of nature, while New York City exposed him to a diverse, urban setting, which drove his interest in the arts. Fox said that people would often throw anti-Semitic slurs at him growing up. He would get into fights to let out his anger, but he eventually found arts and theater as a refuge.

“I realized that the theater was this safe place where you could have that rage, have that drama, have the appeal to justice, and not be physically harmed,” he said.

His anger eventually turned toward the fossil fuel industry. It all started in 2008, when an oil and gas company representative knocked on the door of his home in Pennsylvania and offered his family $4,750 an acre to drill nearly 20 acres of land for natural gas. Although his father was tempted, Fox fought against it after discovering that the operation could poison their water.

As Fox began talking to people who lived near fracking areas, he felt as if he was unraveling something important. “I discovered an environmental catastrophe like nothing I’d ever seen before,” he said. “The whole country was getting fracked, and everywhere I went, water was ruined, the air was poisoned, and the land had been scarred, ripped apart, and toxified.”

So he decided to make a documentary about it, Gasland, released in 2010. He took a road trip across the country to collect stories that underscored how fracking harmed people’s health. One iconic scene from the documentary showed a man from Weld County, Colorado, setting his sink water on fire by igniting it with a lighter.

Hydraulic fracturing — the process of extracting natural gas from the earth by injecting water, sand, and tons of chemicals into shale rock until it cracks — takes place across the middle of the country, with big pockets in Texas, Louisiana, Oklahoma, North Dakota, and Pennsylvania. An analysis published last year by a group of scientists and experts found that there’s a growing body of science that links fracking to reproductive health issues and cancer. Several studies also connect fracking operations to air pollution, earthquakes, and contaminated water.

But just like the water, Fox says in the new play, “the message is being contaminated.” Once Gasland gained traction, the conservative media attempted to undermine his message. He began to see op-eds and clickbait articles published in right-wing publications that attacked his work. In January 2013, a documentary called FrackNation came out, refuting Fox’s claims about the dangers of fracking. The film — produced by Ann McElhinney and Phelim McAleer, who had worked on previous films funded by the fossil fuel industry — followed the format of Gasland, interviewing people across the country who claimed that there are no dangers involved with fracking and praised fracking operations as economic drivers. 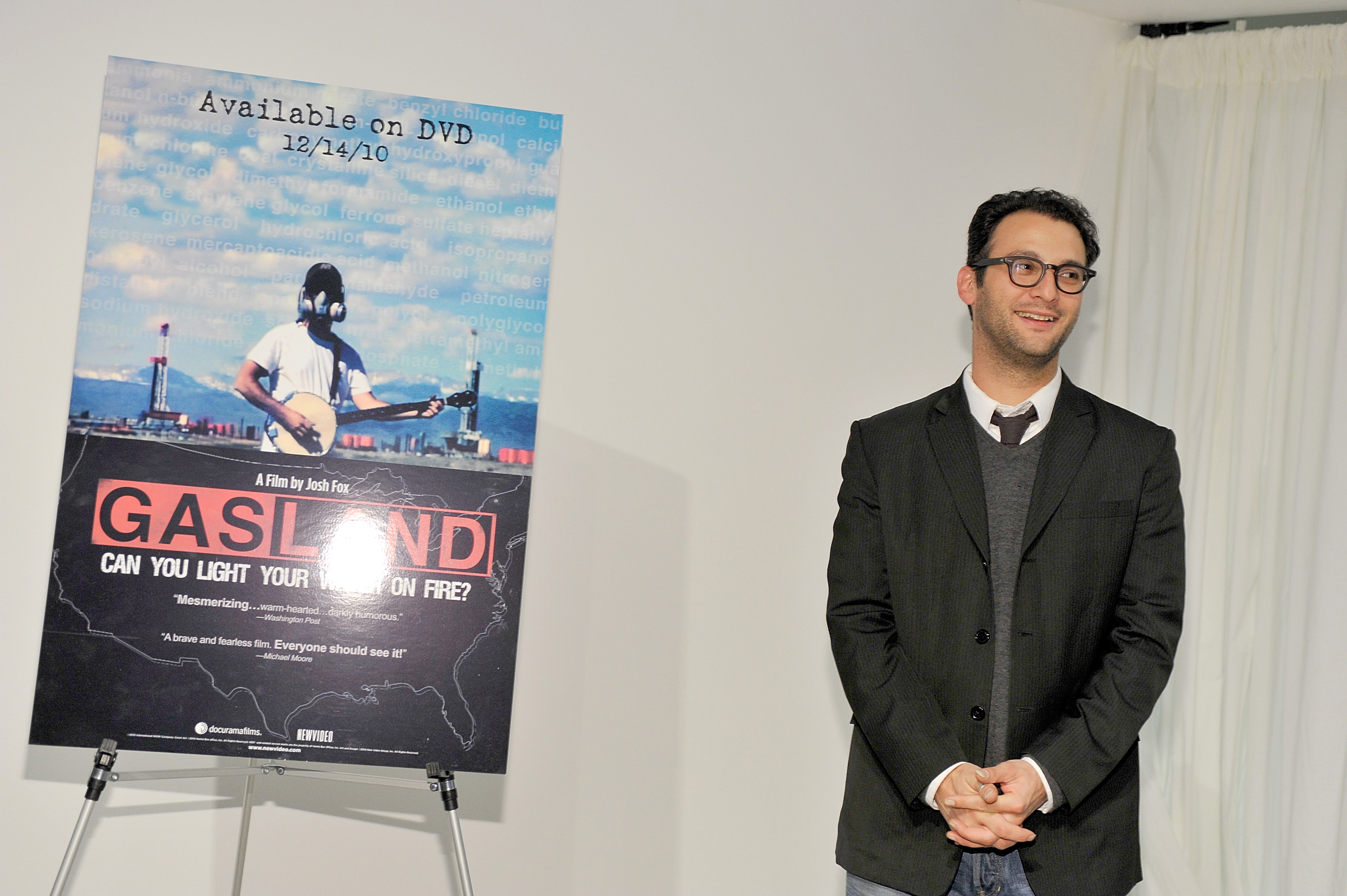 In April 2013, Fox released a sequel — Gasland Part II — where instead of focusing on the communities affected by fracking, Fox looks at the political power and money driving the oil and gas industry.

In The Truth Has Changed, which is showing in Miami next month, Fox recounts some instances where the oil and gas industry would reach out to the media to refute his claims. A New York Times reporter sent him a 10-page document called “Debunking Gasland” that was released by Energy In Depth, a campaign initiative by the lobbyist group Independent Petroleum Association of America. Then on the day of Gasland Part II’s premiere, when Fox was about to go on The Daily Show, Jon Stewart, the host, went up to the dressing room to tell him that the producers had received tons of faxes from Energy In Depth that morning. “Don’t worry, we’re not falling for that,” Josh recalled Stewart saying.

When it comes to juggling Big Oil’s attacks, his work, and anxiety, Fox told me, “There’s one part of you that is so upset, enraged, and just in grief that if you indulge that place, you can’t get out of bed, so you kind of have to keep that at a distance while you’re working on something very practical in front of you. You allow that to be the fuel that motivates you.”

As more and more people recognize the urgency of the climate crisis, oil and gas companies are still up to the same old, same old marketing and public relations tricks. The American Petroleum Institute — Big Oil’s largest lobbying group — is rolling out a new ad campaign addressing the need for cleaner energy. One of the new ads says, “This is natural gas and oil. This is energy progress.” It’s set to appear on TV, social media, and billboards across the country this year, targeting fracking-heavy states such as New Mexico and Pennsylvania.

Last year, U.S. emissions fell to 2 percent compared to the year before, thanks to the rapidly dwindling coal industry. But as natural gas continues to replace coal, the drop in emissions won’t be a long-term trend. A recent report shows that the oil and gas industry is expected to pump an additional 227 million tons of greenhouse gas emissions into the atmosphere in 2025.

The reason for Big Oil’s lies, Fox said, is that they’re scared of the truth — and the climate movement. “We’re all drowning in fear,” Fox said toward the end of his play. Then he turned to ask the audience, “Is there anything stronger than fear?” The audience responded popcorn-style, shouting out suggestions: love, grief, loss, and anger.

“The cure for climate depression,” Fox told me, “is the climate movement.”

“It doesn’t mean you curl up in a ball and think you can’t do it. You have to realize that there’s open arms and open hearts waiting for you to join them in the streets. That’s what inspires me.”

Thanks to Trump, Keystone XL is back. The anti-pipeline movement is ready.