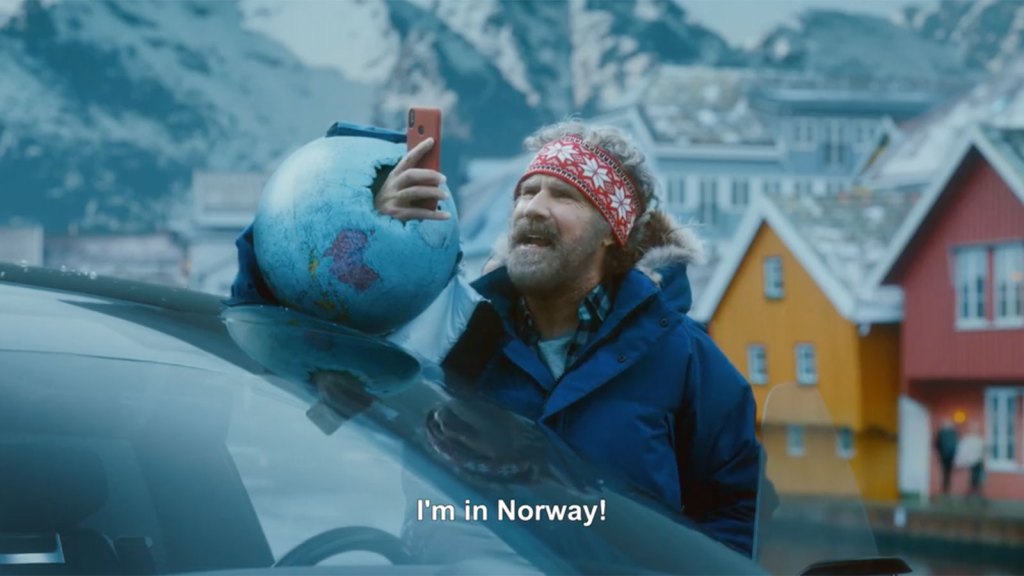 New EV enthusiast Will Ferrell thinks he's in Norway but has, in fact, landed in Sweden. General Motors
no way norway

It’s got Will Ferrell. It’s got Awkwafina. And it’s got … electric vehicles?

“It” in this case is General Motors’ new Super Bowl ad, which the company released Wednesday on Twitter. The ad features Will Ferrell, beard shaggy from COVID-19 quarantine, smashing his fist through a classroom globe when he realizes that Norway has a higher number of electric vehicles per person than the U.S.

Norway is crushing us at EVs. That’s crazy. We have to do better. Are you in? #EVerybodyIn #NoWayNorway pic.twitter.com/QH8kXRd4rp

General Motors is in the middle of an electric vehicle publicity blitz, following their promise — announced last week — to end sales of gasoline- and diesel-powered cars by 2035. In October, the company also released plans for its “Hummer EV,” an all-electric version of the monstrous, gas-guzzling behemoth that still tears through some suburban American streets. (The first edition of this new “super truck” sold out within 10 minutes.)

It’s a wild turnaround for an automaker that — until November of last year — had been resisting cutting the amount of carbon dioxide its vehicles spewed into the atmosphere. In October of 2019, General Motors sided with the Trump administration in a legal battle, pushing back against California’s stricter requirements to cut climate-warming pollutants from cars. But in November, after Joe Biden was elected president, the company seemed to see the writing on the wall.

“President-elect Biden recently said, ‘I believe that we can own the 21st century car market again by moving to electric vehicles,’” Mary Barra, CEO and chairman of General Motors said in a statement at the time. “We at General Motors couldn’t agree more.”

From an economic standpoint, however, the company didn’t have much of a choice. China — the largest single market for General Motors vehicles — has vowed to allow sales of only “eco-friendly” cars by 2035, meaning mostly electric vehicles and hybrids. And in September, California made a similar pledge, promising to prevent sales of all but “zero-emission” vehicles by 2035.

Now, General Motors is surging ahead, promising to release 30 new electric vehicles and add 2,700 electric charging stations to the country’s network by 2025. And it’s doing so not by appealing to the values environmentalists hold dear — hatred of consumerism, protecting wide-open natural spaces — but by hitting on some uniquely American virtues: bigness (an electric Hummer!), and beating other countries (watch out, Norway!). The ad is airing during the Super Bowl, after all.

The U.S. won’t be able to catch up to Norway anytime soon: 6.5 percent of the vehicles on the Scandinavian country’s roads are electric, compared with only 0.3 percent in the U.S. But President Biden has also promised to replace all vehicles in the U.S. fleet (there are 645,000 of them, including a whole bunch of postal trucks that sometimes catch on fire) with EVs, and momentum is building to electrify cars across the country. Change, as they say, happens slowly — and then all at once.