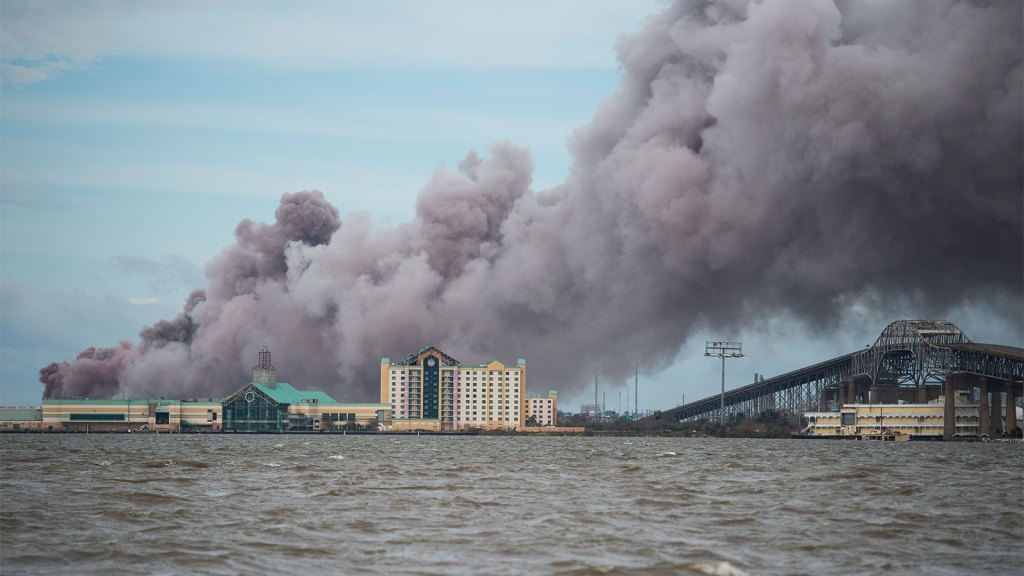 Before Hurricane Laura made landfall as a Category 4 storm, meteorologists warned that it would hit industrial coastal cities like Port Arthur, Texas, especially hard. Public officials along the Texas-Louisiana border urged residents to move out of the storm’s path. But for Port Arthur’s low-income communities of color, the choice was difficult: They could either brave the storm at home, exposing themselves to air pollution from surrounding oil and gas refineries in the process, or else risk exposure to COVID-19 on crowded buses.

For Hilton Kelley, a longtime Port Arthur resident and outspoken environmental advocate, it was tough to leave his community behind — but he also needed to get his family to safety.

“We stayed right up until there was no other preparation left to do,” he told Grist. “I wanted to stay…. but my wife wouldn’t leave without me, and we wanted to make sure the grandchildren were safe as well.”

Hurricane Laura’s trajectory ended up shifting east of its original path, battering the southwest region of Louisiana Thursday morning. Its 130-mph gusts flattened homes and buildings, toppled large vehicles, knocked out trees, left residents without power, and even triggered chemical leaks from industrial facilities along its path. At least 10 people were killed during the storm, including five people who died from carbon monoxide poisoning.

Although the Gulf Coast is no stranger to tropical storms, Hurricane Laura threw the area’s underlying environmental health hazards, which have come from rampant industrial pollution, into stark relief.

In Texas, refineries were rushing to shut down as Laura came barrelling toward the coast. But shuttering these plants actually involves releasing millions of pounds of additional pollution. As part of shutdown procedures, these facilities often need to release and burn off (or flare) various unprocessed chemicals and gases. In fact, when Laura made landfall in southeast Texas, a report by the Texas Commission on Environmental Quality showed that Motiva’s Port Arthur refinery, the largest oil refinery on the continent, had a chemical leak on a process line during the shutdown.

“Our environment is in a predicament,” Kelley told Grist. “When those flares light up, you see this high flame — and at the tip of the flame as the materials burn, there’s thick black soot just pouring out and stretching across the blue sky for miles. The particles would then slowly rain down on our community, affecting our health.”

In southern Louisiana, the petrochemical industry has continued its expansion in recent years, and the presence of major petrochemical infrastructure in places like Lake Charles, where a predominantly Black community was directly in Laura’s path, worried advocates like Anne Rolfes, the founding director of the Louisiana Bucket Brigade, a nonprofit working to hold industries accountable for environmental violations.

“The bigger issue is that the industry is planning to build more chemical plants and more refineries and more liquified natural gas terminals, specifically in the two parishes that were just in the bullseye of Hurricane Laura,” Rolfes told Grist. “We should not build any more facilities in this part of the world. That’s enough.”

When Lake Charles residents woke up at the break of dawn on Thursday, they witnessed not only massive destruction and flooding, but also thick patches of smoke billowing into the sky. The smoke came from a reported chlorine leak at a chemical facility owned by BioLab in the neighboring city of Westlake. Just last year, the Environmental Protection Agency reported that BioLab released more than 21,000 pounds of chlorine, which is commonly used to manufacture pesticides, rubber, and paper. In response to the resulting public health hazards, Louisiana Governor John Bel Edwards suggested that residents turn off air conditioning and close all doors and windows — a difficult request to comply with in the state’s notoriously hot and humid climate.

“In Louisiana, unfortunately, we’re very used to this idea of cascading disasters, where after a hurricane or tropical storm, we’ll have some horrible chemical spill,” said Rolfes, who lives in New Orleans. “After Katrina, we had massive oil spills. There’s always a concurrent chemical disaster. The industry should drill down on improving preparation.”

Additionally, roughly 1,400 active oil wells are clustered along Hurricane Laura’s path. Many of these wells are aging and threatened by the state’s sinking shoreline, a combination that increases the chance of oil spilling into the Gulf of Mexico and surrounding wetlands and marshes. Fifteen years ago, Hurricane Katrina demonstrated the dangers of this concentrated infrastructure: A 2019 investigation by ProPublica and the New Orleans newspapers The Times-Picayune and The Advocate found that the U.S. Coast Guard received 540 different reports of oil spills in Louisiana waters as a result of the 2005 hurricane. The companies behind these environmental calamities are the same ones expanding oil and gas infrastructure on the coast.

With the Trump administration overhauling major environmental regulations, boosting the ailing fossil fuel industry, and cutting the Federal Emergency Management Agency (FEMA) budget, Kelley said that his region’s road to recovery may be arduous. While the agency is changing some of its approach to evaluating damage in light of the pandemic, FEMA insisted on a call with reporters that it does have “sufficient resources to handle” Laura’s aftermath.

“The Trump administration doesn’t get that if we band together and push for change when it comes to carbon emissions, fossil fuels, or whatnot, we can still slow down climate change,” Kelley said. “Not to mention the environmental justice issues the crisis causes in communities of color — especially the Black community — that face disproportionate impacts from toxic fumes that they breathe, making them susceptible to COVID-19.”

With the effects of global climate change becoming more and more tangible, research suggests that hurricanes like Laura will only get more frequent and severe. Laura may be the Gulf Coast’s biggest scare of 2020 — but hurricane season is not over yet.