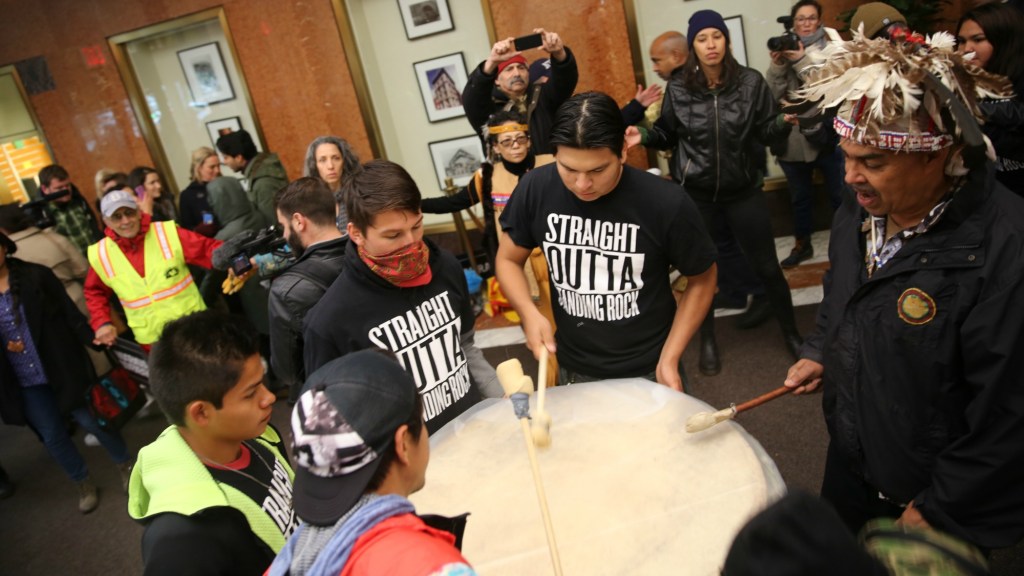 The conflict over the Dakota Access oil pipeline continues to escalate, but Hillary Clinton still hasn’t taken a clear position on it. That’s frustrating some Native Americans and climate change activists who feel that the Democratic nominee should stand in favor of clean water and indigenous rights.

A dozen teenagers from the Standing Rock Indian Reservation showed up at Clinton’s campaign headquarters in Brooklyn on Thursday afternoon to deliver a letter to the candidate. Around the same time, North Dakota state police were breaking up a blockade along the pipeline route and making arrests.

The Standing Rock reservation straddles the border of North Dakota and South Dakota, and many of its residents are intensely opposed to the pipeline, which would destroy some of their adjacent burial and prayer sites. It would also cross the Missouri River, the reservation’s only water source.

When Grist recently asked Clinton campaign Chair John Podesta about the nominee’s position on Dakota Access, he avoided saying anything other than that Clinton supports the Obama administration’s belated efforts to bring tribal voices into the process.

The Standing Rock teen delegation carried wooden poles and a cloth tarp into the Brooklyn high-rise office building that houses the Clinton campaign’s headquarters. They sported black T-shirts, many of which read “Straight Outta Standing Rock” in imitation of the lettering on the classic NWA album cover. In less than two minutes, they assembled a tipi bearing the slogan: “We are here to protect / Water is life!” They unfurled a large banner reading “Protectors not protesters” and assembled a drum circle.

The event’s main speaker was a 13-year-old from Standing Rock. (Organizers asked that her name not be used, due to her age.) “We just want to be heard. As the next president, she needs to represent us,” the teen said, referring to Clinton. At one point, the speaker choked up with tears as she said: “They took away our land, they took away our buffalo, and they’re trying to take our water.”

About 25 local activists showed up in support, even though no organization officially co-sponsored the event. A phalanx of reporters and police officers clustered at the perimeter. The office building is private property and, after about 15 minutes, the police ordered everyone to leave or face arrest for criminal trespassing. The demonstration continued outside in the rain.

According to Gracey Rae Claymore, an organizer from Standing Rock, the Clinton campaign refused to come downstairs to take the letter the group was trying to deliver. They tried to leave it with front desk security, who would not accept it. Eventually, the delegation left the letter sitting on the front desk, where someone from the Clinton campaign retrieved it after everyone had left the building.

Clinton has repeatedly shown she can be pushed to come out against fossil fuel extraction and infrastructure projects that face sufficient public opposition. During the primaries, under pressure from Bernie Sanders and climate activists, she took a position against new fossil fuel extraction in the Arctic and off the Atlantic coastline, and opposed the Keystone XL pipeline.

But Thursday’s demonstration had no immediate effect. “Secretary Clinton has been clear that she thinks all voices should be heard and all views considered in federal infrastructure projects,” Clinton spokesperson Tyrone Gayle said in an email to Grist after the Thursday protest.

“Now,” Gayle continued, “all of the parties involved — including the federal government, the pipeline company and contractors, the state of North Dakota, and the tribes — need to find a path forward that serves the broadest public interest.”