11 scary movies that are secretly about the environment 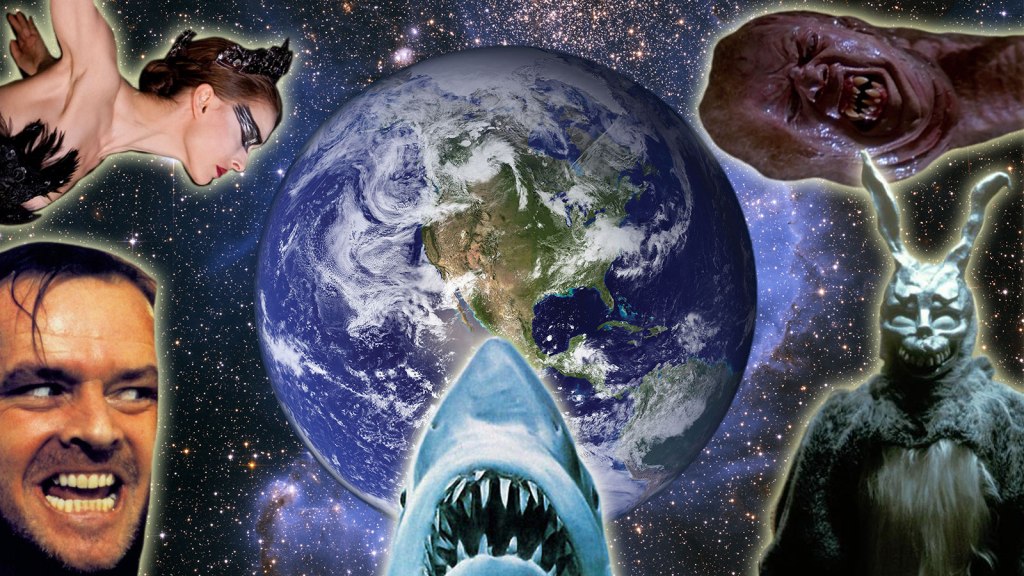 11 scary movies that are secretly about the environment

With a week left to go until Halloween, we are seriously ready to get our spook on. But candy will kill you, and Umbra sure wouldn’t let us get away with toilet papering your house (as far as you know). So for our scares, this year we’re putting the Sexy Gina McCarthy/Al Gore costume back in the closet and turning once again to the cinema.

Few genres are as loaded with subtext as horror — from racism to consumerism to the unquashable scourge of adolescent sexual activity, the lens of horror has a long history of focusing on the important issues of the day and drenching them in blood. Why not climate change and the environment? Here are some of our favorite films you may not have realized are actually horrifying environmental parables.

The Evil Lies Without: The Thing

In John Carpenter’s classic and terrifying The Thing, a receding ice sheet (WHOA) in Antarctica (DOUBLE WHOA) reveals an alien ship containing a creature that can mimic anything it kills (mostly humans and dogs, though, cuz Antarctica). And, trust us, if you didn’t care about receding ice sheets before, this movie makes a pretty compelling argument for keeping our glaciers intact if only to keep any possible döppelganging aliens imprisoned therein.

Like climate change, The Thing is insidious, difficult to explain or understand, it thrives by taking advantage of humanity’s worst instincts, and it’s vulnerable only to a handsomely bearded Kurt Russell’s flamethrower. (Wait, I’m being told that last one does NOT apply to climate change. Well, shit.)

The Evil Lies Within: Black Swan

You know that feeling: You’re trying, REALLY HARD, to be the perfect green citizen. You don’t eat meat, because you’re watching your carbon footprint, but avoiding all that sumptuous face bacon requires some complex choreography. You walk or bike everywhere, unless — OK, it’s rainy and you REALLY want that chai latté. Plié, jump, repeat, tiny green dancer. You sort all of your trash into the correct composting/recycling/upcycling/peecycling/unicycling bins, even though your friends all abandon you while you peer into the dark heart of the post-consumer waste system. Everyone looks to you as the environmental paragon — but in the mirror all you can see is Pashon Murray covered in feathers. Scratch yourself. Hard.

Could it be — might it be — you are the true source of all that you hold evil in the world? YOU? Perfect little you? (Spoiler: Yes. It’s you.)

Sure, that dude in the rabbit costume was freaky, but this cult favorite is steeped in creep from the beginning. After all, it is set in the suburbs. Specifically, Middlesex, Va., a quintessential development of the emotional-repression-and-finished-basements variety, which is to say, soulless. No wonder no one noticed when Jake Gyllenhaal starts going a little crazy — do you think that would happen in a thriving, mixed-use urban area? Definitely not!

In fact, pick a scary movie and tell me that all those cul-de-sacs aren’t part of the horror. Edward Scissorhands? Check. Carrie? Full-on picket-fenced terror. A Cabin in the Woods, you say? Why don’t you spare yourself the gorefest and go in for some dense urban living instead.

It’s Always Hungry for More: Dawn of the Dead

George Romero pioneered the horror-flick-as-social-critique with Night of the Living Dead, but his skill reached operatic heights in Dawn of the Dead, a biting (ha) satire of consumer culture set in Pittsburgh’s Monroeville Mall. Romero acknowledged as much, filling his “temple of consumer society” and waste with rotting, dead-eyed zombies clamoring for brains. If you’ve ever been to a Best Buy on Black Friday, you’ll recognize this film is actually a documentary.

It’s Lurking in the Deep: Jaws

Be honest: After you saw Jaws, every time you went in the ocean, you knew it was out there. Somewhere. Lurking in the deep. The Big One. Well that’s EXACTLY how marine biologists feel about ocean acidification. In fact, it’s not just out there, it’s EVERYWHERE. Waiting to strike. The oceans might as well be piping that ominous theme constantly, because the monster is here and it’s chomping everything in sight.

Now if only solving ocean acidification were as easy as shooting a few well-placed exploding air tanks.

Only You Can See the Truth: They Live

When you spend large amounts of time swatting down climate deniers and attempting to move the needle on an apathetic populace, the idea that the halls of power are really controlled by bug-eyed, skull-faced aliens intent on stripping the Earth of its resources to leave behind a globally warmed mess goes from plausible to definite. Too bad we don’t have magic sunglasses so that people could see the climate truth, and Roddy Piper’s sick mullet (for style points).

Just like Tony’s “red rum,” we’ve seen climate change’s writing on the wall for a long time now. And yet here we are! We’re inept and ill-fated caretakers, trapped in this mansion called Earth and haunted by apparitions: the twin ghosts of cap-and-trade; the dancing spirits of broken renewable energy promises; bloody elevators. Trying to push climate action on a government that mews and cries more than Wendy makes us want to just reach for the axe, already. Seriously, just try to write about the climate all the time; it’ll drive you crazy.

Plus, with temps breaking records every year, freezing to death in a snowstorm sounds kinda nice right now.

There’s Too Many of Them: Shaun of the Dead

Ugh, zombies. Sure, they LOOK like people, but they’re just stomachs on legs, amirite? What’s worse, they want to eat us out of house and home and brain and everything else we hold dear. As this amassing horde gnaws away at our nice lifestyles we, the special-snowflake survivors, must reset the status quo. With a shotgun.

Yep, that sounds a lot like overpopulation — a bugbear plenty of western environmentalists conjure up when discussing tough questions about limited resources in a climate-changed future. Don’t get me wrong, zombies are scary, but population growth is a problem better addressed with education and healthcare than a chainsaw. Still, judging by the recent outbreak of zombie movies, this is a potent fantasy scenario for greenies and preppers alike.

So why choose Shaun of the Dead from the gory buffet? Because it proves even a group of directionless misfits can solve the biggest problem in the world if they approach it with humor, beer, and a couple well-placed headshots. Sounds familiar.

We Dug Too Deep: Tremors

If Tremors taught our 8-year-old selves anything, it’s that some bad shit can happen when you start digging holes in the ground. (Also, no pogo sticks.) The 1990 monster western opens in a derelict mining town in Nevada, where the crumbling infrastructure of bygone extraction industries makes an eerie setting for the monsters stirring beneath the surface. Today, with fracking operations tapping deep into Graboid territory, “tremors” are coming back, and they’re scarier than ever.

It Wants to Eat You!: Attack of the Killer Tomatoes

GMOs, duh. Really, people, this one kind of explains itself.

It’s Bigger Than Us: Godzilla

Is there any horror more familiar to the green-inclined than the terror of an inexorable, relentless threat — an unholy force of nature so much bigger than you, that you can probably never defeat, and yeah, it’s also all sorta your fault? Thought not. Watching the many incarnations of Gojira and his opponents smash their way through cities, power stations, subways, casinos, and beachside resorts that make up the very breakable landscape of the Anthropocene feels like foreshadowing of the most chilling kind.

We’re not the only ones to note the resemblance: Gareth Edwards, director of the newest (and biggest, and most destructive) remake of Godzilla, has said that the clashing giants in his movie are a giant, creepy-blue-fire-breathing metaphor for global climate change. Face it, climate hawks: “Resilience” and “mitigation” are nice, but considering the Mothra-sized impacts at hand, the climate movement could really use a kaiju about now.