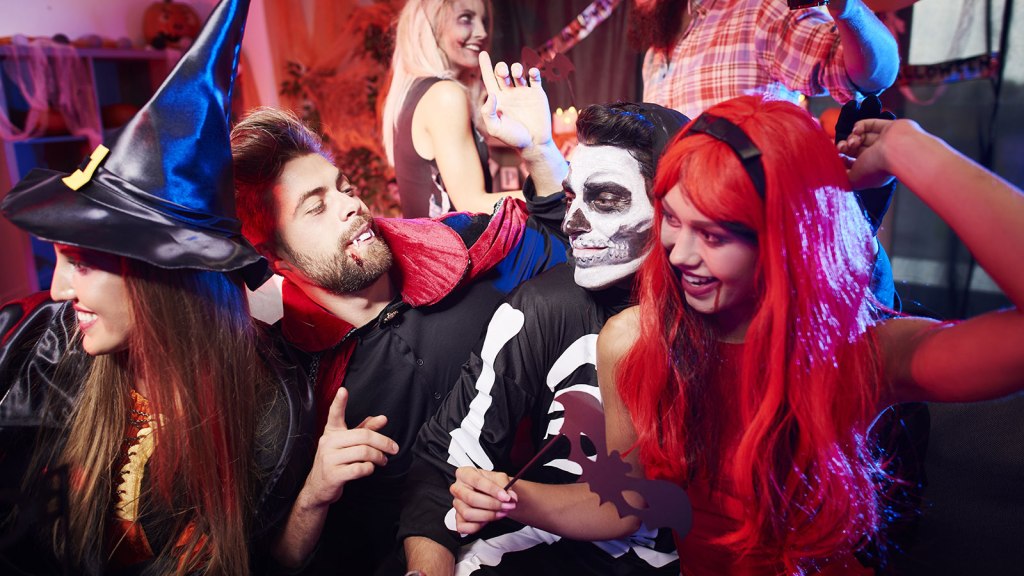 Eco-themed Halloween costumes are definitely in. After all, it’s a night devoted to terror and excess. But how do you stand out in a sea of BP oil spills and sexy Ken Bones?

This year, don’t just dress like an environmental catastrophe. Act like one, too. Science has spit out some nasty (and terrifying) stats about our changing world lately. We have a few suggestions for ways you can be equally obnoxious this year. Just remember — it’s for the planet.

Fact: Climate change doubled the area burned by wildfires since 1984. Human-caused climate change sent an extra 10.4 million acres of Western forest up in flames, according to a study published this month. That’s twice the area predicted to burn under normal circumstances. In the next decade or two, forest fires are “almost certainly going to continue growing,” says study coauthor and Columbia University bioclimatologist Park Williams.

Act it out: Dress in head-to-toe orange and act a fool all night. Throw orange confetti and silly string, manspread (if you can), and generally take up way more space than you deserve. (Note: Silly string is extremely flammable. Please don’t light any actual fires with this costume.)

Fact: 11 of the last 12 months were the hottest on record. This was the sizzlingest September in 136 years. And before that, it was the hottest August. And the hottest July. You get the picture. June, mercifully, was only the third-warmest June since 1880 — but every other month since October 2015 was a record-setter. It’s enough to fry your brain.

Act it out: Roll up to the party with 11 of your hottest friends. So what if you’re average looking? You’re obviously the “coolest” person there.

Fact: Methane emissions are 60 to 110 percent higher than we thought. Double, double, toil and trouble. Fires burn, and the cauldron is certainly bubbling. We’ve been underestimating methane emissions from oil, coal, and natural gas exploration by 20 to 60 percent, says a new study in Nature. Creepy.

Act it out: Cattle take a lot of the blame for methane emissions, but fossil fuels are big emitters, too. Explain this to partygoers while wearing your best cow suit and spritzing gag fart spray.

Fact: Hurricane Sandy-level floods could inundate New York three to 17 times more often in the next century, researchers reported this month in PNAS. That means major flooding every 23 to 133 years, compared to every 1,200 years in 1800. That estimate is based on projections of sea-level rise and ocean heights during storms, between the years 2000 and 2100. A swamp grows in Brooklyn.

Act it out: This one has group costume potential. Dress up as your favorite New York icons (Statue of Liberty, Empire State Building, Pizza Rat, Taylor Swift), and toss a bucket of water into every party you attend. Soaking the guests is a great segue to talk about flooding. Bonus points if your outfit includes snorkel gear.

Fact: We’ve lost a 10th of the world’s wilderness in the last 20 years. If you loved BBC’s Planet Earth (and are squealing for Planet Earth II), I’ve got some bad news. We are losing wild landscapes at alarming speed. Humans have mined, logged, farmed, and otherwise damaged 3.3 million square kilometers of wilderness since the early 1990s. That’s an area twice the size of Alaska, according to a September study in Current Biology.

Act it out: No dress up required. Just take houseplants, pets, lamps, the fish tank, whatever you want from any parties you attend. If anyone asks you what you’re doing, just mutter “see how you like it” and pedal away as quickly as possible.

Halloween is all about getting scared, and pissing people off, for educational reasons. So rock that jerky costume. Wear it with pride. And tomorrow, crowdfund against pollution — or plant a native, organic, and water-wise garden — or support family planning and sexual education in your community. Yes these stats are spooky-sad, but get into it, have fun, definitely don’t light yourself on fire, and remember there’s still plenty we can do.

(If none of these are up your alley, here are some more eco-minded costume ideas for you.)