When supporters of the Kamine Zoo in Hitachi, Japan, needed to raise money for renovations, they passed on the usual fundraising routes and instead took a leap into the world of high fashion. Rather than recruiting the likes of Jean Paul Gaultier, they decided to go in-house with their design process. Specifically: the lions, tigers, and bears (oh my!) department.

Tires and rubber balls were wrapped in sheets of denim before being tossed to the predators. The resulting Zoo Jeans are “the only jeans on earth designed by dangerous animals,” the volunteer group claims. It sure looks like these animals don’t mind adding their creative flair and masticatory talents to the project (apparently the lion-designed jeans have the most holes). The jeans are currently up for bid on Japan’s Yahoo Auctions. All profits will go to the zoo and the World Wildlife Fund. Here’s a look at the lion-designed pair: 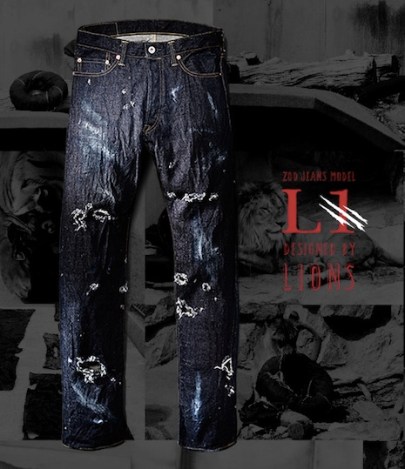 The high-fashion world is not completely sold on the idea. The rips are “too sporadic,” a denim buyer at Selfridges in London told The Guardian. “Men want them on the thigh, the knee, the back pocket. Rips on the calf, as they are here, don’t look natural,” he said.

Read in tooth and claw, the jeans seem pretty “natural” to us. Semantics aside, we see his point. Would these critters be open to critique on their design instincts? I’m sure as heck not going in there to tell them.