350.org challenges climate activists to stand up for Ferguson 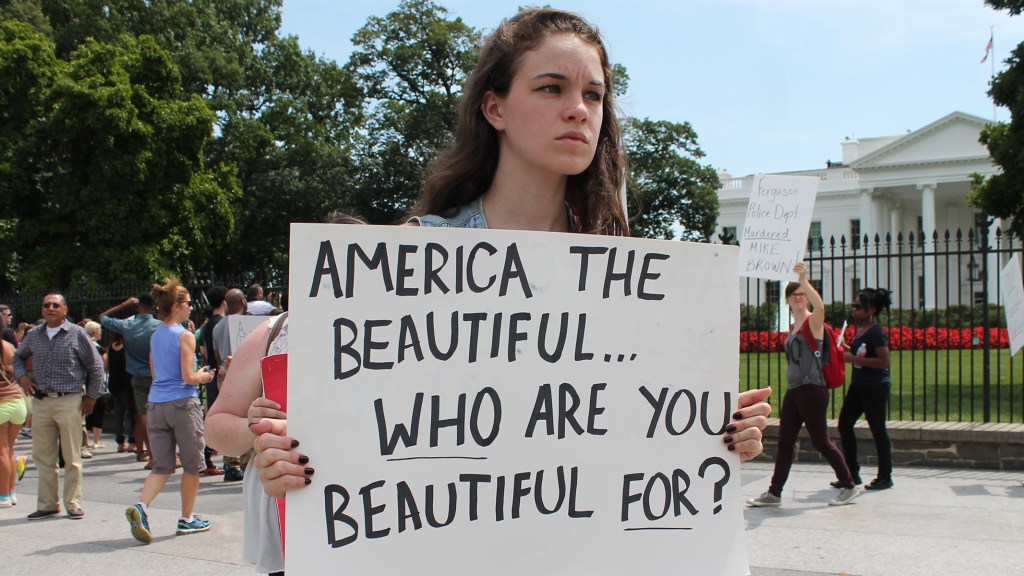 350.org challenges climate activists to stand up for Ferguson

For Deirdre Smith, the strategic partnership coordinator of the climate activist group 350.org, “the connection between militarized state violence, racism, and climate change was common-sense and intuitive.” Smith wrote this in her blog about the unrest over the killing of Michael Brown’s in Ferguson, Mo. It’s probably tougher to connect these dots if you’ve been wedded to climate change as a single issue. I spend much of my time writing about the intersections of climate and social justice, but I have struggled to frame the Ferguson tragedy in ways that don’t take it out of context.

Brown was not killed by greenhouse gas emissions; he was killed by a cop. Bloggers and pundits will conjecture all night about whether Brown was under the influence of marijuana, or the cop under the influence of racism. But the most salient fact here is that a young man who had a promising future is no longer alive to fulfill the promise. A mother and a father have lost their child. We need to take that seriously before branching off into whatever ideology or worldview we hope to highlight with his death and the aftermath.

Still, this disaster tests an idea I wrote about two years ago for Bridge the Gulf:

I’ve seen groups like NAACP, Urban League, League of Young Voters, Color of Change take on climate justice, Keystone XL justice and other environmental campaigns. But I’ve not see much reciprocity — that is, I’ve yet to see a groundswell of environmental advocates take up the cause of Stand Your Ground, juvenile justice, felony disenfranchisement, economic inequality, and other justice programs that primarily target people of color.

Which is a shame, because those movements could use some of environmentalists’ passion around conservation and the preservation of life. The same people who are concerned about the life of dolphins, bluefin tuna, blue crabs, white sharks, red drum, brown shrimp, and brown pelicans, should also be concerned about the lives of black and brown people, like Jordan Davis and Trayvon Martin — or the thousands of people of color trapped in Louisiana’s prison system.

And then yesterday I received an email from 350.org that shows that the group gets this. The message, from Executive Director May Boeve, states that her movement stands in solidarity with Ferguson protesters, and calls on the larger climate movement to do the same. Best of all, Boeve wrote, “We believe unequivocally that working for racial justice is a crucial part of fighting climate change.”

This is powerful because there are too many people in the climate movement who believe racial justice and climate justice are inequivalent. A lot of those who share this belief likely have the resources, wealth, and racial privilege to do so. When climate-enraged storms and floods start coming, they have the wheels, boats, homes on higher ground, and friends in even higher places to weather them. Those of meager resources and less access to power can’t afford to segregate so easily. Boeve seems to understand that:

Communities of color and poor communities are hit first and hardest by the impacts of a climate system spiraling out of control. From those impacted by Hurricane Katrina nearly a decade ago, to the New York neighborhoods that bore the brunt of Hurricane Sandy, to whole towns in the Philippines devastated by Typhoon Haiyan just last year — these communities are on the front lines of our fight in a very real way. If their voices are not part of this movement, then this movement will not succeed.

Movements for justice in the U.S. are often fractured, and powerful interests — like the fossil fuel industry — try their hardest to make those divisions wider. Choosing to stand together is one of the most important choices we can make. In this moment, that means being frank about the ongoing legacy of racial injustice in our country.”

I’d make just one edit to this otherwise on-point statement: Being frank about ongoing racism and including all voices is not just crucial to the climate change movement — it’s crucial to any movement. It’s crucial just for living.

Bringing Deirdre Smith back, she writes:

This is difficult work. Some of it requires listening and working with racial justice organizations, and some of it requires introspection, questioning what we have been taught, and healing from internal oppression. Part of that work involves climate organizers acknowledging and understanding that our fight is not simply with the carbon in the sky, but with the powers on the ground.

That difficulty is not an overstatement. It’s mainly because of that difficulty that people choose to self-segregate or silo off to issues a la carte. Smith says she believes “the climate movement is up to this necessary challenge.” I’m, frankly, a skeptic. But 350 gives me hope.