After Ferguson, what next? 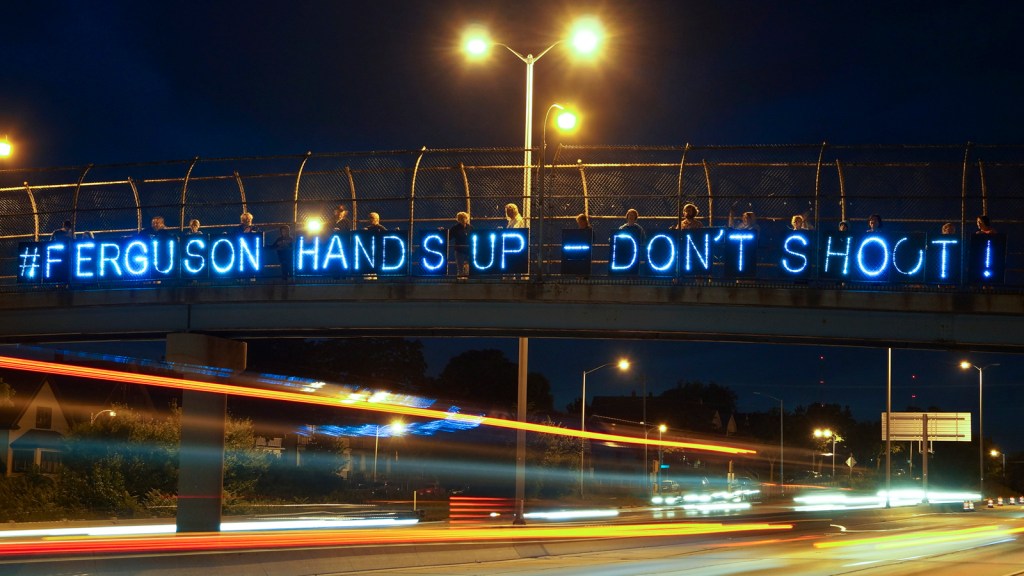 After Ferguson, what next?

What happens when your protest is over? Earlier this month, people in Ferguson, Mo., began marching in the streets, asking for answers to three questions: Who from the local police department had shot Michael Brown, an unarmed teenager? Where was the incident report? And why had the case been handled the way that it was?

These demonstrations sprawled into something larger when the police responded by dragging out an eye-popping quantity of decommissioned military gear, arresting reporters, tear-gassing peaceful protesters, and acting like they were putting on a summer stock theater production of Full Metal Jacket. By the time the chief of police divulged the identity of the police officer, the questions had multiplied. Counter-protestors appeared. The FBI came, and then the U.S. attorney general, and then the National Guard. Even more media arrived. A grand jury was convened.

After two weeks, the protests began to take on what New York Times reporter Dan Barry called a “Groundhog Day feel”: Aside from sporadic moments of panic, everything had more or less settled into a routine.

The protesters, the reporters, the yellow-shirted observers from Amnesty International — everyone but the police — walk around and around. They might take a break in a designated area, or pause to study a glowing Anderson Cooper, his black shirt offsetting his shock-white hair, as he delivers his report. But then it’s back to walking the oblong path, like exercisers on a high school track.

All of this is going to be pretty familiar to anyone who has had to cover a long-running series of protests. To complain about the repetitiveness is beside the point. Protests are theater. Sometimes they are spontaneous; sometimes they are well-rehearsed. Sometimes they are boring as hell. But that doesn’t mean that they don’t have results that can survive long after the protest is over.

Ferguson was powerful because it wasn’t just about one person’s killing in one suburb. It was also about Ezell Ford, John Crawford, Denzell Curnell, and Dante Parker, all of whom had died earlier this summer under similarly suspicious circumstances. “Hands up! Don’t shoot!” was theater, but it was incredibly powerful theater, because it made the outsized response to the protests seem even more ludicrous.

What’s always harder to cover, as a reporter, is what happens after a moment like Ferguson, when a previously ignored problem seems to crystallize into view. Real change takes time: It’s fraught with setbacks, and politics, and compromise, and learning new power structures. The most visible aspects of the Occupy movement dispersed in New York but have reappeared in the form of disaster relief organizations, like Occupy Sandy, and in the form of smaller, more nimble organizations like Strike Debt.

When I lived in San Francisco, I would occasionally see people in the Castro wearing a T-shirt that showed a police car in flames, with the words “No Apologies – May 21, 1979” on them. The GLBT Historical Society sold them; they were reproductions of an old design commemorating a riot where gay men, angered at the light prison sentence given to the former police officer who had murdered Supervisor Harvey Milk,  ripped up parking meters and used them to smash out the front windows of City Hall. When the police arrived to stop them, the protesters set fire to the police cars. Not long after, the mayor appointed a new chief of police, and openly gay people began to join the police force.

You couldn’t say that one was the direct consequence of the other. But protest happened, and then change followed. When I was working as a reporter in San Francisco, I routinely interviewed older gay politicians who described how, in the ’70s, you understood that the San Francisco police cruised the Castro after the bars closed looking for gays to beat up the same way that you understood that rain sometimes fell out of the sky. For all the present-day SFPD’s flaws, that common knowledge is now thankfully uncommon.

When I started covering environmental activism, people told me that I had to write a story about Richmond, Calif. Something incredible had happened there, they said. It was a legendarily polluted and troubled community, but a group of locals had gradually worked their way up through city government to the point where they could begin to regulate the Chevron refinery that generated most of that pollution.

I went there, expecting to find some hard-core environmentalists, which the Bay Area has more than its share of. Instead, I found a hard-core clarinetist and political science major who was inspired to get into local politics after a group of local police officers tackled and arrested his family at a Cinco de Mayo party. Once he and his allies had managed to get rid of the local police chief, they felt like they’d gotten the hang of this reform thing and wanted to keep on going.

Michael Brown’s funeral was today, Monday. News coverage reported that many people in the crowd were wearing “Hands up! Don’t shoot!” T-shirts. It may be years before we see the effects clearly, but voter registration booths have been out at the protest site. Calls are out to compile and otherwise track police behavior — something that people have tried to do for years, but still haven’t been able to do comprehensively. There’s been talk of making police wear body cameras, as they do in places like Rialto, Calif. And there’s been many, many essays expanding the story to a broader context, especially about who has the right to public space.

The protests may be nearly over but, if history is any judge, the changes are just beginning.