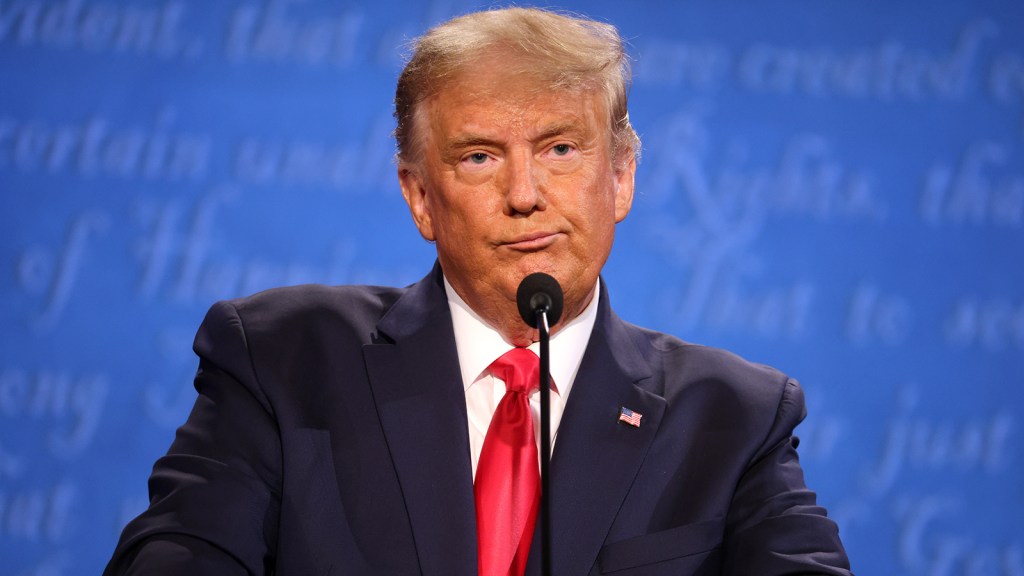 “You both have very different visions on climate change,” NBC’s Kristen Welker said in the last 20 minutes of the second and final presidential debate in Nashville, Tennessee, on Thursday, setting up a tête-à-tête on climate policy between the two candidates. “For each of you, how would you both combat climate change and support job growth at the same time?”

President Trump and former vice president Joe Biden don’t see eye to eye on a great number of things, but you’d need a microscope to see the common ground between them on the issue of climate change. On Thursday night, the pair mostly rehashed the particulars of that great divide, hitting notes they’ve been hammering for months now, including during the first debate.

Trump alleged that the United States has the cleanest air and water in the world, when in fact his administration has spent the better part of his term rolling back regulations that protect those resources. Biden leaned hard on his $2 trillion plan to reinvigorate the U.S. economy and combat rising emissions in the process (though his proposal suggests eliminating emissions from the electricity sector by 2035, not 2025, as the candidate said on stage). Trump accused Biden of letting “AOC plus three” — Representative Alexandria Ocasio-Cortez of New York and the three other members of the “Squad” — ghostwrite his climate plan. (“It’s actually AOC plus 115 because that’s how many House and Senate members have cosponsored the most ambitious climate legislation in American history,” Ocasio-Cortez shot back on Twitter; also she was one of many advising Biden on climate.)

Though there was plenty of inanity from Trump, the portion of the debate that focused on climate change wasn’t all “tiny windows” (Trump seems convinced environmentalists want to do away with windows in the name of energy efficiency) and dead birds (don’t ask). The night held one big surprise: Biden said that he aims to transition the U.S. off of fossil fuels.

On its face, that doesn’t sound like a big deal. Scientists agree that keeping the world’s remaining fossil fuel resources in the ground is essential if we’re going to slow planetary warming. And many politicians, including Biden, have said that oil and gas development needs to be seriously reined in and, eventually, phased out. Biden’s whole green stimulus plan focuses on transitioning fossil fuel workers to jobs in renewable energy.

Still, saying you want to phase out oil and gas hits differently on a debate stage than in a whitepaper. Here’s how it went down. And it was the first time a major candidate for U.S. president has said anything of the sort on a national debate stage.

As Biden was responding to a question from Welker about what he would do to help communities of color affected by industrial pollution, Trump interjected with a question of his own. “Would you close down the oil industry?” Trump demanded, hoping Biden would say yes. He got his wish. “I would transition the oil industry, yes,” Biden said. “That’s a big statement,” Trump said. “It is a big statement,” Biden replied.

Welker, sounding resigned, gave in to Trump’s effort to redirect the conversation. “Why would you do that?” she asked Biden. “Because the oil industry pollutes, significantly. It has to be replaced by renewable energy over time,” he said, powering through Trump’s interruptions.

“Basically what he said is he’s going to destroy the oil industry,” Trump said, looking like a kid on Christmas morning.

Trump had good reason to look pleased. Biden may have just handed the Trump campaign a golden sound bite. For decades now, the fossil fuel industry has played a massive role in American politics. Oil and gas companies and lobbying groups donate millions of dollars to politicians every major election cycle. And the oil, gas, and coal industries collectively employ millions of Americans.

But did Biden drop a bombshell on Thursday, or was he just leveling with the American people? In the past couple of years, the conversation around climate change in America has shifted dramatically. That’s due to a perfect storm of factors: The effects of climate change have become more visceral, a vast majority of young Americans (the biggest generation of voters in the country now) want their elected representatives to combat rising temperatures, and the Green New Deal — co-introduced by Ocasio-Cortez — prompted the left (and even a few folks on the right) to take a more aggressive approach to reducing emissions. Polls show that Americans are in favor of climate action across the board.

Trump may think that Biden took a huge political risk tonight, but it’s also possible that the president is out of touch with how far the nation has come on this issue. Biden was just reiterating what his plan, and what many other climate plans released by his fellow candidates in the Democratic primary — and, more recently, by committees in the House and Senate — have been spelling out for months and months now: a government that gives fossil fuel companies federal subsidies instead of transitioning fossil fuel workers to jobs in renewable energy is not one that’s committed to fighting climate change. (At a press pool after the debate, Biden amended his stance on phasing out fossil fuels, saying: “We’re not getting rid of fossil fuels. We’re getting rid of the subsidies for fossil fuels, but we’re not getting rid of fossil fuels for a long time.”)

But on stage, he was forceful and clear about his goals. “Look, we have to move toward a net-zero emissions. The first place to do that by the year 2035 is in energy production,” Biden said, closing out the section on climate change — and sounding as though he were simply stating a fact.