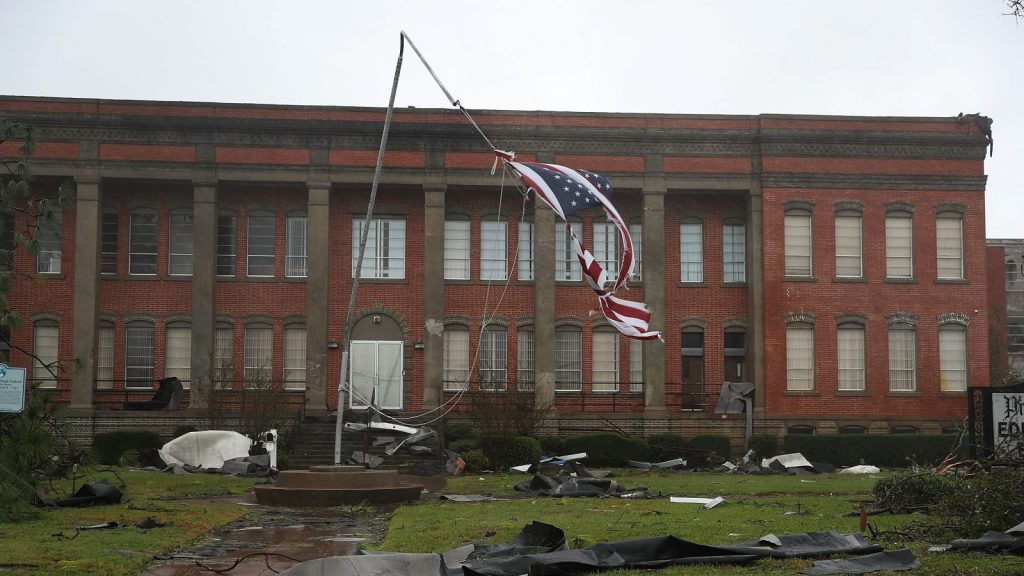 Hurricane Michael slammed into the Florida Panhandle Wednesday afternoon. The third strongest storm to ever hit the United States, it brought 155 mph winds, heavy rainfall, and towering storm surges. While Floridians in Michael’s path were searching for refuge from the storm’s imminent fury, thousands of would-be voters missed the state’s October 9 voter-registration deadline.

In response, a coalition of civil rights groups including the Advancement Project, the Lawyers’ Committee for Civil Rights Under Law, and the American Civil Liberties Union has filed an injunction in federal court against the state. Florida officials refused to further extend the registration deadline, despite issuing mass evacuations and closing down offices in preparation for Hurricane Michael. There have also been mounting complaints about “a mess” in the online registration system — with glitches that could have disenfranchised thousands of eligible voters. The lawsuit calls for the voter-registration deadline to be extended by at least one week statewide.

“Our lawsuit is about protecting the right to vote for people impacted by Hurricane Michael in a moment where state officials have been unresponsive and unwilling to do the right things,” Kristen Clarke, president and executive director of the Lawyers’ Committee for Civil Rights Under Law, told Grist. “It is unreasonable to expect that anyone in Florida will have an opportunity to register and vote when you’re in the storm’s path.”

Considering Florida has a long-standing history of razor-close elections, as well as the high stakes of November’s upcoming election — where climate-related issues like toxic algae blooms and now Hurricane Michael are expected to take center stage — voters who were unable to register could have some political influence on the environmental burdens they and other Floridians face.

According to a new analysis by the Union of Concerned Scientists out earlier this month, the same communities that suffer from the burden of socioeconomic distress and environmental segregation — such as exposure to air toxins — also often face restrictive electoral laws. Researchers made the connection by examining Congressional election turnout and compared the effect of both socioeconomic, environment, as well as institutional factors on turnout.

“These cumulative inequalities add up and make it very difficult for those who are most in need of protecting their interests in their community from actually having a voice in the political process,” said Michael Latner, lead author of the analysis and a Union of Concerned Scientists fellow.

Researchers found that the lowest voter turnout happens in vulnerable communities and communities of color. “You get this cumulative effect such that you’ve got environmental injustice inequalities — that is, the burdens of environmental pollution and degradation — more concentrated among people of color and economically burdened communities,” Latner told Grist.

The areas affected by Hurricane Michael are some of Florida’s poorest. Gulf County and Franklin County have some of the highest poverty rates in the state at 23.5 percent and 23.1 percent, respectively. (Florida’s overall poverty rate stands at 14 percent, per the U.S. Census.) Calhoun County, just inland of where the storm made landfall, has a poverty rate of 21 percent. It’s also the county with the lowest median household income in the state — less than $32,000 per year.

“People who are economically depressed, in many ways, have less of a voice,” said Donita Judge, senior attorney and co-director of the Power and Democracy Program at the Advancement Project, one of the groups that brought suit against the state. “When some communities catch a cold, poor communities catch pneumonia. It’s always worse for them to overcome.”

This is not an isolated instance. Back in 2016, civil rights groups also sued the state after its refusal to extend the voter registration deadline during Hurricane Matthew. “Everybody has had a lot of time to register,” said Florida Governor Rick Scott at the time. Scott is currently on the ballot for one of the state’s two seats in the Senate.

But Scott’s response ignores the fact that, historically, there are spikes in voter registration rates right as a deadline approaches. In 2016, after a court ordered an additional one-week extension of the statewide deadline to accommodate those affected by Matthew, more than 100,000 additional Floridians registered.

Of course, Florida is not the only state facing allegations of voter suppression. Texas, which has some of the worst voter registration and voter participation rates, rejected 2,400 online voter registrations before the October 9 deadline. In Georgia, 53,000 voter registrations — of which nearly 70 percent belonged to African-Americans — are in limbo after the state’s Republican candidate for governor, who is also its current secretary of state, began overseeing an “exact match” registration verification process.

As human-induced climate change continues unchecked, disasters the likes of Michael are becoming the norm. “From Hurricane Katrina to Hurricane Michael, these past few years make clear that climate change is having an impact on our country,” Clarke of the Lawyers’ Committee for Civil Rights Under Law said. “Election officials should do a better job at having emergency plans in place that safeguard the rights of voters.”