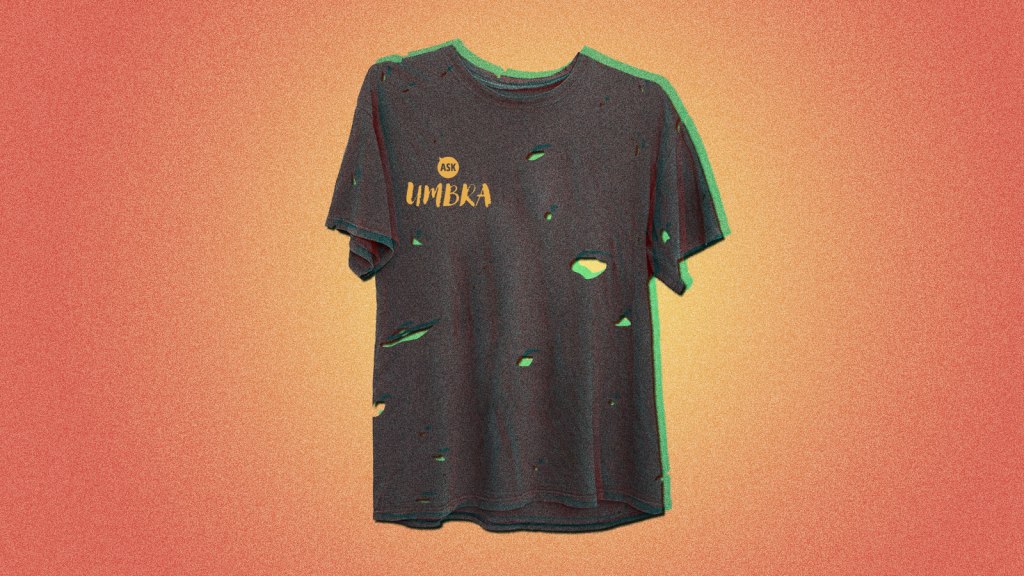 Which is better: Wear something out TOTALLY (shoes, sheets, clothes, etc.) and throw it away, or use an item and then donate it before it’s too worn out?

— Will One Rip be Noticed?

Compared to some of the scary, complicated environmental topics that have been trending lately — climate nihilism and mass murder! The point at which the planet becomes truly unliveable! Raising children in the age of apocalypse! — I appreciate that you’re inquiring about something so tangible and non-terrifying. Except your question, unfortunately, doesn’t actually have as simple an answer as you might expect. Argh!!! I know.

Many consumers have cottoned on (sorry) to the idea that the clothing and textile industries have a massive carbon footprint. Of course, there’s a very wide spectrum of behavior when it comes to buying and keeping clothes, ranging from Mariah Carey excess to Marie Kondo minimalism. And given that you’re even asking this question, I’d guess that you lean a little more toward the latter end of the spectrum.

It’s no stretch to say that the Western world is driven by profligate consumerism. (That’s not to say that the world is filled with Mariah Careys — there can only be one when it comes to that five-octave range and buttery-smooth tone!) According to Jackie King, executive director of the Secondary Materials And Recycled Textiles Association, only 15 percent of clothing and textiles get reused (resold or donated and worn again) or recycled (manufactured into new fabrics or repurposed into washrags or insulation). That means 85 percent of materials ends up in the landfill, which averages to about 81 pounds per person per year. And that amount is actually trending upward over time; yes, we’re getting more wasteful.

For the purpose of your question, let’s focus on the 15 percent of old clothes that get taken to a donation or recycling center. Only about 45 percent of that actually gets to be worn again. The other half gets recycled into other materials with the small remainder being deemed unusable due to contamination by hazardous materials.

So unless you have a habit of soaking your old clothes in effluent from a copper mine, your definition of “totally worn out” is probably much higher than standard used by the textile reuse industry. That is to say, that Pretty Ricky concert swag from 2007 might have another life as recycled fiber, cran-vodka stains notwithstanding. The difference between wearing your clothes to shreds and recycling them, as it turns out, isn’t that significant.

So how to choose? Certain materials are more useful in a second life than others, and this can guide your original purchases. Cheap poly blends or flimsy fabrics don’t have as much staying power as cotton, which is more desirable from a recycling or repurposing standpoint. (Cotton farming, it must be said, has a huge carbon footprint — again, complications!) The most common-sense wisdom you can take from that is that the better-made your clothes are to begin with, the better they’ll serve their next owner.

While researching the answer to your question, I even came across a compelling argument that old clothes are better used as recycled material than as thrift store finds. The fibers from an old pair of jeans, for example, are likely to get more use in the form of a new material than they will on a new body. Why? Studies of consumer behavior suggest that used clothing doesn’t get worn as much in its second life as its first. You might call it the law of diminishing wardrobe returns.

But if we’re talking about a piece of clothing that you don’t or can’t wear anymore that could likely offset someone else’s brand-new store purchase, by all means release it back into the wilderness of your local secondhand store or buy-nothing group. I’m referring to all the maternity wear, club heels that never really fit, and JNCOs buried deep in the closets of 30-somethings. (The giant pants are back, FYI. But not for you.)

One thing you really don’t want to do, however, is keep cycling clothes through the wash without giving them a lot of wear first. The energy used to wash and dry and iron (if you do that …) an average item of clothing is, by far, the largest part of its carbon footprint. That’s assuming that your laundry room or laundromat is powered by fossil fuels, like most — but not all! — of the world at this point. If you really wanted to wear your wardrobe in the most environmentally sound way possible, you’d never wash it. I’m serious, unfortunately.

There are ways to clean your clothes in more carbon-saving ways, of course. Hand wash or wash in cold water and air dry, for starters. Traditional dry cleaning is more carbon-intensive than regular washer-and-dryer, but you could do as I do and just pretend that “dry clean only” is really more of a suggestion. (That’s really more out of thriftiness and laziness than carbon responsibility, if I’m being honest. But hey, same result.)

And there’s another element to consider: culture. I’d love to live in a world where no one is judged on superficial things like how they look or dress. It sounds great, truly, and I say that as someone who loves to shop (secondhand!) and dress up and have lots of outfits. But it’s not the case, and it’s not likely to change. So if I advised you to wear your clothes until they were worn out to absolute shredded rags, it would just be irresponsible because it wouldn’t take into account the fact that you’d face all kinds of potential adverse consequences: Judged at work, harassed on the street, teased by friends, etc.

The point is, your question, like any question that we ask about how to deal with climate change, can’t be answered in a vacuum in which the only thing that matters is more or less carbon footprint, or more or less water use, or more or less toxic pollution. Especially when it comes to everyday, identity-expressing things like food and clothing, advice that doesn’t factor in culture is worthless.

Does that mean that you should avoid all carbon-saving behavior because people might be mean to you? Of course not. But when it’s something that makes as marginal a difference as donating vs. recycling your clothing, obviously I’m going to tell you to do the thing that doesn’t make your life much harder. Every day is a battle to stave off climate dread! Just wear what you have that makes you happy!

The most important thing to avoid is throwing away your clothes. When you donate unloved wardrobe items to big secondhand charities like Goodwill or the Salvation Army, they’ll deem whether they’re true trash or able to be resold or recycled. Goodwill reports that about 10-20 percent of their donations end up getting sent to recyclers; Jackie King says that the industry average for secondhand retailers is about 25-35 percent. If you’re convinced your clothes are in too rough shape even to donate, take them to a local fabric recycler — but again, your standards may be different from others!

One thousand-odd words later, here’s the simplest possible answer to your simple question, aka the Umbra Environmentally-Conscious Wardrobe Mantra that I’ll holler again and again until I die: Buy secondhand, wash your clothes less frequently, mend or tailor when possible, and donate or recycle when you’re tired of clothes you don’t wear living rent-free in your closet. It doesn’t have to be any more complicated than that.