When was the last presidential race in which the two leading candidates for a major party’s nomination aggressively competed over who has the best plan to address climate change? Oh, right, never.

But 2016 is a new era. This week, the Bernie Sanders and Hillary Clinton campaigns talked smack to each other on social media, fighting for the hearts of climate hawks.

It started on Wednesday, when Sanders — who last month released a very ambitious, but legislatively focused, climate plan — challenged Clinton to detail her own plans.

Over the last few months, Clinton has reacted to the candidacies of Sanders and fellow climate hawk Martin O’Malley, as well as grassroots activist pressure, by moving left on a couple of key climate issues. After years of avoiding taking a position on the Keystone XL pipeline proposal, Clinton came out against it shortly before President Obama rejected it. She also took a stance against Arctic drilling and released a plan with high targets for renewable energy generation.

But Clinton has not laid out a comprehensive agenda to cut down on carbon pollution. She hasn’t called for a carbon-pricing system, like Sanders’ carbon tax proposal. It isn’t clear how she would reach her clean energy goals. And she has adamantly refused to join Sanders in calling for a full ban on fossil fuel leasing on federal land. With Obama having just put a moratorium on new coal leasing on public land, that ups the pressure on Clinton to clarify what exactly she would do on fossil fuel leasing. So far, she has only vaguely said she would charge more than the current below-market rates for federal fossil fuel leases.

So the Sanders campaign issued a statement bragging about his climate agenda and calling on Clinton to match it. It ended with a list of top items from Sanders’ agenda that Clinton hasn’t taken a stance on, asking if she will make the same commitments:

With only 12 days to go before the Iowa caucuses, … it remains unclear whether Hillary Clinton will tell voters what she would do to address climate change. …

Does Secretary Clinton oppose the Bakken crude oil pipeline that cuts through Iowa and three other states? What’s her position on the Northeast Direct pipeline in New Hampshire?

Will she support a carbon tax? Will she continue President Obama’s moratorium on all new coal leases on public land? Will she commit to banning fossil fuels extraction on public lands? Does she oppose offshore drilling? Fracking? We just don’t know.

Where is Secretary Clinton’s climate plan?

That tweet pointed to a post he had published on Medium. “[T]he Sanders campaign asked where our climate plan was. I guess they didn’t look too hard,” Podesta began. He went on to highlight Clinton’s comments throughout the campaign on the importance of combatting climate change. He also ran through the promises she has already made, such as committing to fully implement Obama’s Clean Power Plan to reduce emissions from coal-fired power plants. “And she’s nowhere near done yet,” Podesta concluded.

He ended with this zinger: “While the Sanders campaign pores over those, I suggest that they explain how they plan to back out of the international climate deal that President Obama reached with the rest of the world in Paris. After all, Senator Sanders did come out against it.”

Although Podesta did the best he could with the material he had, it’s clear that Sanders has the better of this argument. Coming out against Keystone right before Obama rejected it and promising to complete implementation of your predecessor’s plans isn’t much of a bold new climate agenda for your own presidency. The Sanders campaign was clear about the policy questions they want Clinton to address. Podesta’s answer is “she’s nowhere near done yet.” Presumably, that means she’s eventually going to give a lot more specifics. But when? After she’s won the primaries and is pivoting to the center for the general election?

As for Sanders coming out against the Paris Agreement, it’s a clever kicker. As the Paris negotiations were wrapping up last month, Sanders said the deal “goes nowhere near far enough.” It’s a legitimate viewpoint that Sanders’ comments are unmoored from political reality and he’s letting the perfect be the enemy of the good. But Sanders is also right: The deal doesn’t go far enough on emissions cuts and falls even shorter on climate justice. The important question is whether, as president, Sanders would be pragmatic enough to accept the best deal he could get, as Obama did. Rather than just trying to use Sanders’ Paris comments as a gotcha, the Clinton camp should call on Sanders to clarify whether he would have signed the Paris deal if he were president, and how exactly he would get stronger terms when countries come back to negotiate again in 2020.

The Sanders camp hit back on Twitter, spelling out their unanswered questions once more: 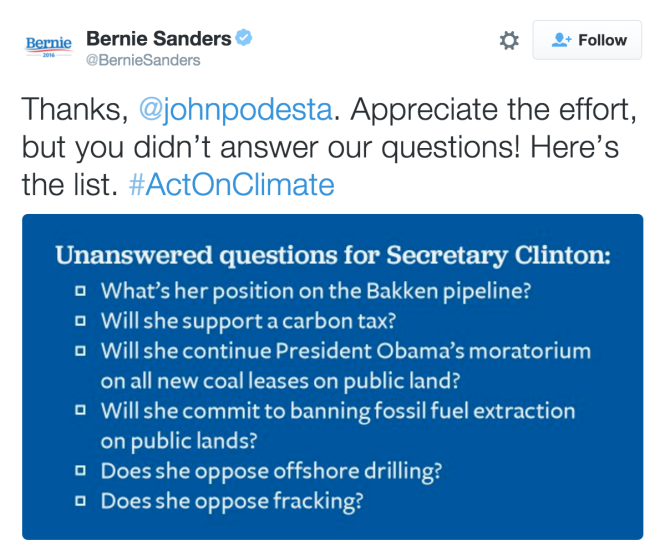 Whether Clinton will commit to policies like banning offshore drilling to head off Sanders’ challenge remains to be seen. But Sanders, Clinton, and O’Malley are all actively competing to be the strongest on climate change. It’s a noticeable shift from years past when climate change was considered too low of a priority to become a policy battleground the way, for example, Obama and Clinton’s competing health-care reform plans were in 2008. This time around, the candidates are convinced that the Democratic base is fired up about climate change and looking for real vision.