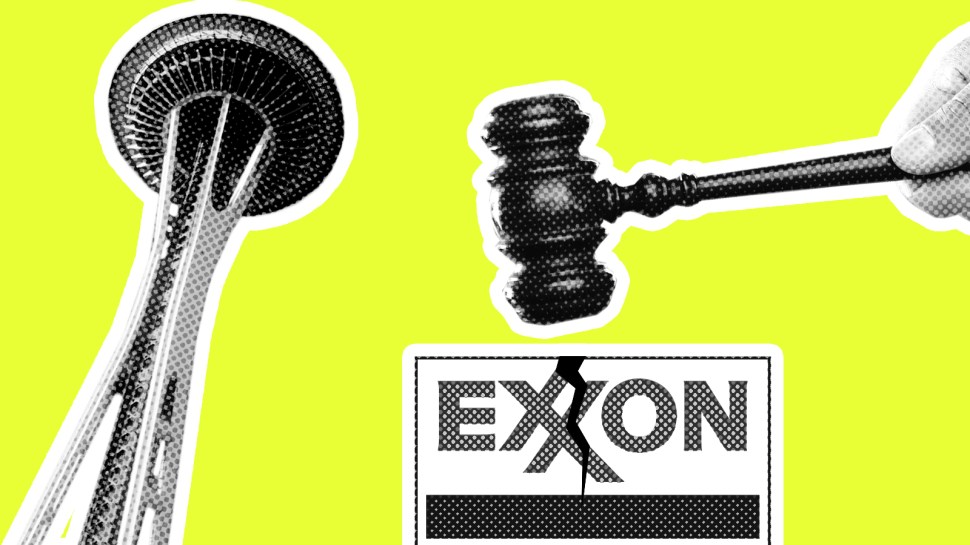 Washington’s King County is ready to do battle against five major oil companies. Grist’s very own hometown of Seattle and the surrounding area just filed a lawsuit against BP, Chevron, ExxonMobil, Shell, and ConocoPhillips for knowingly contributing to climate change and downplaying the risks of rising temperatures. The county wants the polluters to pay up — it’ll put that money in an abatement fund for future use against rising sea levels and damaging storms.

If this lawsuit sounds familiar, it’s because New York City, Oakland, and San Francisco recently filed similar lawsuits. And two counties in Colorado followed (law)suit shortly after. That makes King County the latest addition to a dozen or so historic climate change lawsuits.

The suit, filed Wednesday in the Superior Court of the State of Washington, seeks funds from major polluters for stormwater management, salmon recovery (climate change poses a huge risk to the state’s beloved fish), and public health, among other things. The lawsuit alleges the companies “borrowed the Big Tobacco playbook in order to promote their products.”

Watch out, Big Oil! The law firm on the case was involved in the ’90s legal offensive against the tobacco industry. A lot has changed since cigarette companies played us like a bunch of chumps. For one, we know smoking kills. And for two, don’t fuck with our salmon burgers.

In an all too classic Trump move, the White House administration quietly cut funding for NASA’s Carbon Monitoring System. The $10 million research program used satellites and aircraft instruments to monitor carbon dioxide and methane levels. The data was going to help hold countries accountable for their emission levels. And, to pour salt on the wound, a new bill in the House wants to give NASA $10 million for hunting aliens. Yes. You read that correctly.

California may be a true leader in the climate fight, but that effort is an act of self-preservation, too. Global warming is already having a very real effect on the state, according to a state EPA report. Over the past few years, the Golden State has faced record temperatures, drought, wildfires, and rising sea levels. Hitting their aggressive emissions goals will require a strong fuel economy standard given California’s love affair with the automobile.

Can we get a mediator in here please? The U.N. climate change talks were held in Bonn this week but ended in a stalemate over the technicalities of the Paris Climate Agreement. Poorer countries are fed up with richer countries dragging their feet on finance and carbon cutting commitments. And now, leaders like China are now looking to renegotiate key aspects of the deal. An extra week of talks have been scheduled for September. Fingers crossed for a better outcome next time!

Pruitt’s birthday was yesterday and so, naturally, I wrote a thoughtful card to the ol’ guy, complete with not one, but two playlists to celebrate his special day and role at the EPA. We asked for your song suggestions too. We were pleased to find that the Grist audience has some pretty excellent taste in music (and wicked senses of humor). Kudos to you, friends. Check out our curated song list below and feel free to email us with some more suggestions. I’m sure you’ve caught on to the theme … 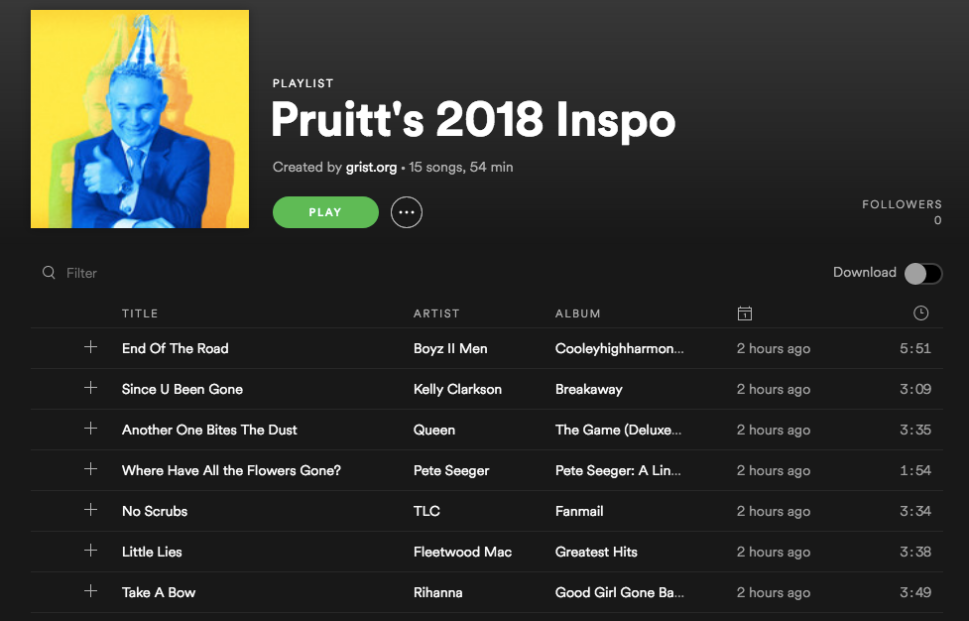