On May 13, the Polar Pioneer chugged determinedly across Puget Sound toward Seattle, ignoring requests from the mayor and port officials to stay away.

The Pioneer is a fourth-generation, semisubmersible drilling rig, designed by the Japanese firm Polar Hitachi and built in the shipyard in Ariake, Japan, to withstand some of the world’s harshest conditions. With a deck that is larger than two football fields, and a central derrick towering 33 stories above the waterline, the rig is capable of drilling in waters up to 1,640 feet deep, penetrating as far as 25,000 feet into the sea floor. Its quarry: A motherlode buried beneath the remote Chukchi Sea called the Burger Prospect that could, some believe, produce a million barrels of oil a day. Ann Pickard, Royal Dutch Shell’s executive vice president for the Arctic, calls the deposit simply “the prize.”

Shell plans to use Seattle as a base for a whole fleet of vessels bound for the Arctic when the ice breaks up, but the Emerald City is none too happy about harboring what the alt-weekly newspaper The Stranger dubbed a “climate bomb.” On May 4, Mayor Ed Murray announced that hosting the Polar Pioneer would violate the Port of Seattle’s land-use permit. The port asked Shell to stay away until the matter could be resolved. When neither of these actions slowed the rig’s advance, Seattleites sent out the local Navy: a couple hundred banner-waving activists aboard stand-up paddleboards and Life Saver-hued sea kayaks. They called it the Paddle in Seattle.

Points for bravado (and really fantastic photos), but Shell didn’t even blink. The Polar Pioneer rolled into the port May 14, and there it still sits, tied up to the docks south of downtown, its derrick rising like a middle finger pointed directly at the city. (I don’t think I’m the first to make that comparison, but once you see it, you can’t unsee it.) 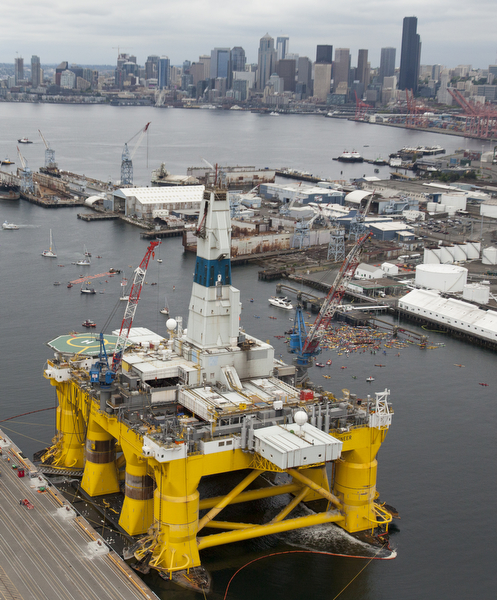 You laugh, but you’d be wise not to: Seattle has been in the business of against-all-odds climate activism for well over a decade, sometimes with surprising results.

Flash back to 2001, when President George W. Bush renounced the international Kyoto Protocol climate treaty. In response, a handful of U.S. cities pledged to meet the Kyoto goals, committing to reduce greenhouse gas emissions to 7 percent below 1990 levels by 2012. The Seattle City Council passed a pair of resolutions adopting the Kyoto goals and committing its public electric utility, Seattle City Light, to a major shift to clean-energy sources. “Cities are where most emissions occur — and where the solutions must begin,” said then-Mayor Paul Schell. “We can’t afford to wait for the federal government to do this.”

The city got most of its electricity from hydropower to begin with. But this shift required cutting ties with coal- and gas-fired plants and signing on as the anchor tenant for a wind farm in the Columbia River Gorge. These moves represented some of the early stirrings of a climate movement that was beginning to brew in the municipal offices and council chambers of progressive-minded cities around the country.

Schell’s successor as mayor, Greg Nickels, took the process one step further. Nickels was an unlikely climate crusader. He never considered himself an environmentalist; his idea of helping protect the environment was buying a low-flow washing machine. But the winter of 2004-05 was abysmal in the Northwest. Snowpack was near record low, and the ski season was a bust. With spring on the horizon, Nickels worried about the city’s water supply, and its hydro power.

On Feb. 15, 2005, with the Kyoto Protocol about to take effect in 141 countries, but not his own, Nickels announced not only that Seattle would meet the Kyoto targets, but that he planned to build a coalition of like-minded U.S. cities — one for each of the countries that had adopted the Kyoto Protocol. The goal, as he now describes it, was to send a message to the world “that there is intelligent life in America and at some point we will rejoin the [climate] fight.”

Eventually, 1,060 U.S. mayors signed on, including both Democrats and Republicans, and leaders from all 50 states, the District of Columbia, and Puerto Rico. “I did not think it would resonate the way it did,” Nickels says. But the Northwest wasn’t the only place experiencing odd weather patterns. The Gulf Coast had been battered by storms (it was only the beginning — Hurricane Katrina would brutalize the region that August), and parts of the Midwest were also deep in drought.

The move struck a chord internationally, says KC Golden, senior policy advisor for the Seattle-based nonprofit Climate Solutions. Golden recalls attending the international climate talks in Montreal that December, where the Bush administration was notably absent. Nickels was there, talking to delegates from Africa and elsewhere in the world who were distraught at the United States’ inaction. Nickels’ presence, Golden says, was “really important in terms of keeping hope alive.”

By the time Nickels set off for the 2009 climate talks in Copenhagen, he boasted that the city had met the Kyoto goals, thanks in large part to Seattle City Light’s abandonment of coal and gas, and a move away from oil to natural gas as a home-heating source. 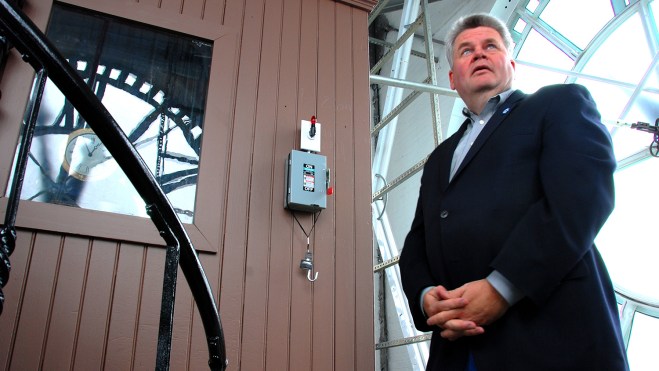 By 2012, when the bell tolled for signatories of the Kyoto treaty, Seattle had lost ground, despite the work of yet another green-leaning mayor, Mike McGinn, a staunch bicycling advocate and former state chair of the Sierra Club. A greenhouse gas inventory conducted for the city found that its emissions had gone up substantially since Nickels’ triumphant announcement three years earlier. They were still below 1990 levels, but only by 1 percent, vs. the sought-after 7. (Portland, Ore., in contrast, cut emissions by 14 percent. San Francisco slashed them by 23 percent.)

There was more to the story, however. Between 1990 and 2012, Seattle’s population grew by nearly a quarter. Its economy had ballooned, too, as the tech industry brought thousands of new jobs. When doled out on a per-person basis, the city’s emissions had actually dropped 20 percent, to about half the national average. “That’s pretty remarkable,” says Pete Erickson, senior scientist with the Stockholm Environment Institute, who conducted the 2012 inventory.

City leaders were not content to stop there. In 2010, they had begun exploring the possibility of eliminating Seattle’s carbon emissions altogether, a goal that was endorsed by the city council early the following year. In May of 2011, Erickson and his colleagues at the Stockholm Environment Institute, along with city staffers and other consultants, released a road map for reducing the city’s emissions by 30 percent by 2020, 60 percent by 2030, and 90 percent by 2050, relative to 2008 levels.

Seattle’s 2013 Climate Action Plan moved the ball further down the field, lining out what amounts to a complete overhaul of the city. Old buildings will be retrofitted to reduce energy use and new ones will be required to meet strict efficiency standards. New homes and jobs will be concentrated inside high-density urban clusters. Public transit, bikes, and pedestrians will be given equal standing with cars. More and more of the city’s waste will be recycled, composted, or otherwise diverted from the landfill.

Jill Simmons, the long-time (and recently departed) chief of the city’s Office of Sustainability and the Environment, remembers the late 1990s, when Seattle was one of just a handful of cities across the country with offices dedicated to green concerns. Today, urban sustainability directors number in the hundreds, and Seattle is part of a small “vanguard” group that is driving the movement toward net-zero cities.

“There are downsides to going first. We made mistakes,” Simmons says. Still, she is proud of what Seattle has accomplished. She points, for example, to the city’s energy “benchmarking” program, which requires the owners of commercial buildings to track energy use, and gives them incentives to reduce it. With 96 percent compliance, it’s the nation’s leading benchmarking program, she says. “Just reporting energy use is not the end. We’re talking about how to really be a catalyst for action.” 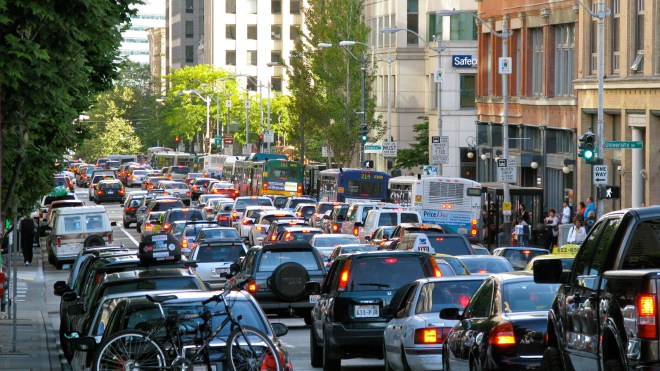 It’s one thing to get building owners invested in energy conservation. It’s quite another to wipe out an entire city’s contributions to climate change. That’s going to take money. As the climate action plan states, “Many of these strategies, most notably in the transportation sector, will require several orders of magnitude more public resources than are currently available.”

Particularly costly will be the construction of a light-rail network (Seattle currently has only a single light-rail line, stretching from the airport, south of the city, to downtown), increased bus service, and a complete makeover for the city’s streets. (I’ll delve more deeply into that later in this series.)

And then there’s the factor that blew Seattle’s Kyoto Protocol compliance: all those pesky humans. Between 2012 and 2013, Seattle was the fastest-growing major city in the U.S., according to Gene Balk, the Seattle Times’ numbers guy. The following year, Seattle ranked No. 3 in the nation for growth, adding 15,000 people to its population. Looking at those numbers, the city’s projection of 100,000 new residents in the next 20 years seems rather low.

Handled smartly, more people in the city will be a net win for the climate, as dense, urban living requires less burning of fossil fuels than life in the suburbs. But reducing carbon emissions while continuing to add bodies will require some dramatic changes in behavior.

“It’s easy to go out and fight Shell. It’s easy to say, yes, we want higher energy codes,” says Seattle City Councilman Mike O’Brien, who heads the city’s planning, land use, and sustainability committee (and who, incidentally, has been one of the most prominent voices in the fight against Shell). “It’s not as easy to say, oh, you want me to drive less? You’re gonna toll me when I drive?”

The trick, he says, will be finding a balance between pushing toward a more sustainable, livable future, and respecting the voices of the people who are already here. “We have to be as aggressive as we can,” he says, “without pushing so hard that there’s a backlash that undoes everything we’ve accomplished.”

The good news is that Seattle finds itself once again in the hands of a leader who seems to get it. Ed Murray campaigned on a $15 minimum wage and civil rights, but those who know him say he is an urbanist at heart: He wants to create a thriving, human-centered city. And that lines up well with the goals of the climate movement.

Murray also came into office at a time when issues surrounding fossil fuels are coming to a head, and he hasn’t hesitated to take a stand against them. “To prevent the full force of climate change, it’s time to turn the page on things like coal trains, oil trains, and oil drilling rigs,” Murray said in a statement, with Shell’s Polar Pioneer bearing down on the city. “It’s time to focus on the economy of the future: electric cars and transit, green homes and environmentally progressive businesses.”

Call it symbolic, just like the Paddle In Seattle. That’s what people said back in 2001, when the city council signed on to the Kyoto Protocol. But sparks here have a way of igniting bigger fires. And if Seattle has its way, we won’t need Shell’s “prize.” By the time the company taps into that sweet Arctic crude, we’ll be zipping around on our bikes, and in electric cars and buses, enjoying the crisp, sea air blowing in off the sound.