When I lived in New York City, I frequently needed to get away from the constant crowds and commotion. Rather than heading to upstate New York’s forests or Long Island’s wilder shores, though, I’d get on the subway.

The A train, to be precise, rumbling beneath those parts of Brooklyn that don’t show up in Girls-variety representations of the borough, to the Howard Beach-JFK Airport station. I’d catch a local car service — run from a hole-in-the-wall across the street — for a ride over the Cross Bay Bridge to a beachside parking lot. From there I’d walk into another, more peaceful world, the Jamaica Bay National Wildlife Refuge, the little-known jewel of New York City and the national park system. 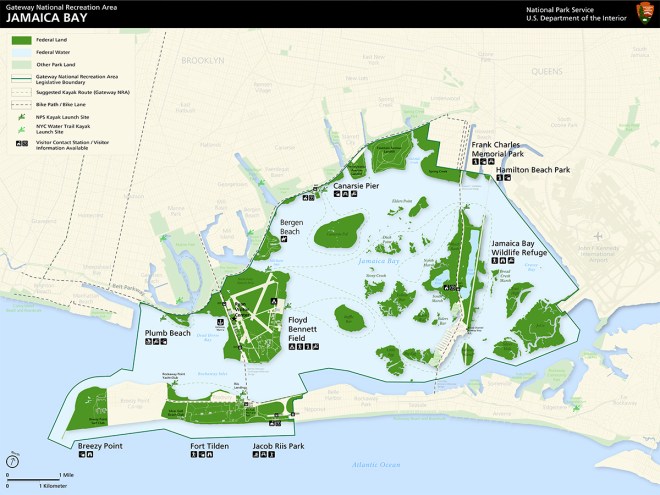 A bit of fine-print nuance here: The 14-square-mile refuge is part of Gateway National Recreation Area, which rings New York Harbor and is run by the National Park Service. So it’s not a textbook national park. It certainly doesn’t have the cachet of Yellowstone, Glacier, or the Everglades. But the rangers wear the goofy uniforms, you can get your National Park Passport stamped there, and it’s called a national park on the NPS website. All of which seems appropriate to the jury-rigged, I-know-a-guy character of New York City itself. The bottom line is, it’s one of the few national parks you can reach by cab.

My cab drivers, most of them born and raised in Queens, often don’t know where the refuge is. More New Yorkers have seen Jamaica Bay through an airplane window than from their feet. That’s part of its beauty. There, still within a city of 8.4 million tightly packed people, is a place where you can not see anyone for long stretches of time. Or at least not anyone human. There’s wildlife in abundance, especially during the spring and fall, when the bay turns into an oasis for migrating birds. More than 300 species have been recorded there, though personally I’m not the type to keep a life list of birds. Mostly I like to sit by the tideline with a good book, my camera, and a pair of binoculars, feeling a sense of kinship. 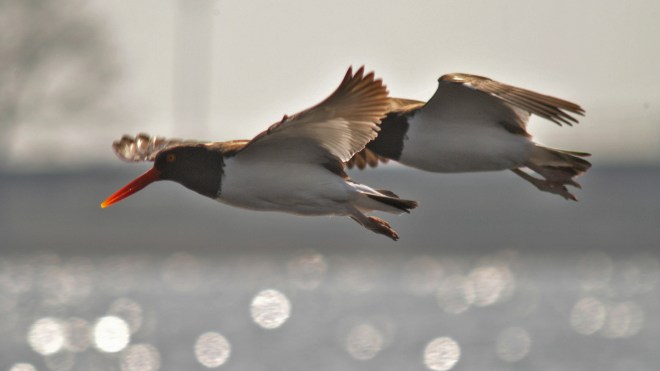 That anyone can, in less than an hour, go from shouldering through Midtown Manhattan to watching oystercatchers court never ceases to delight me. With that delight, however, comes a certain disquiet. These are interesting times for Jamaica Bay — and for the entire Gateway area, for which I’m using the bay as a shorthand, as the pressures are felt most acutely there. It’s emblematic of nature in an urbanized world, a microcosm of tensions felt not just in America’s national parks, but most everywhere the natural world meets our well-intentioned, big-footed, short-sighted species. And as I watch those oystercatchers, I wonder what will become of Jamaica Bay in the next century, or even in the next few decades.

As Earth’s carbon-choked climate continues to warm and its seas rise, the bay’s beloved and ecologically vital features will be inundated, submerging marsh islands where bird colonies breed and tidal wetlands that shelter baby fish until they’re ready for the open ocean. In the absence of development, those wetlands would be able to migrate in their fashion, as new tidal habitats form at higher elevations and offset the ocean’s inland progression. Jamaica Bay is surrounded not by forests, though, but by a genuine urban jungle.

“The whole bay is spoken for,” says Don Riepe, the American Littoral Society’s official Jamaica Bay Guardian. “There’s nowhere for the wetlands to go.” Seagulls chattered in the background as I talked to Riepe on the phone. His home sits on pilings in the bay, and as its wildlife and habitats are threatened, so too are its people (for more on this, see the documentary Saving Jamaica Bay). “New York City is something of a test case,” Riepe says. “Can we repair the marshes? Will we still be here in a hundred years? Or are we going to have to retreat?” 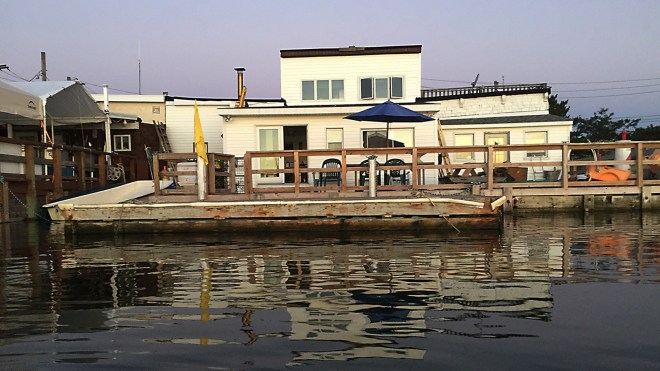 Climate change is just the most obvious threat. As in so many places, focusing too narrowly on it threatens to obscure other pressing issues. Pollution is a constant problem: Four sewage treatment plants discharge directly into Jamaica Bay, and heavy rainfall sends sewer overflow straight into its waters. In many places, trash covers the bay’s shorelines. Brightly-colored devotionals left by Hindu pilgrims performing rituals dot the surf alongside plastic bags, deflated balls and broken bottles. 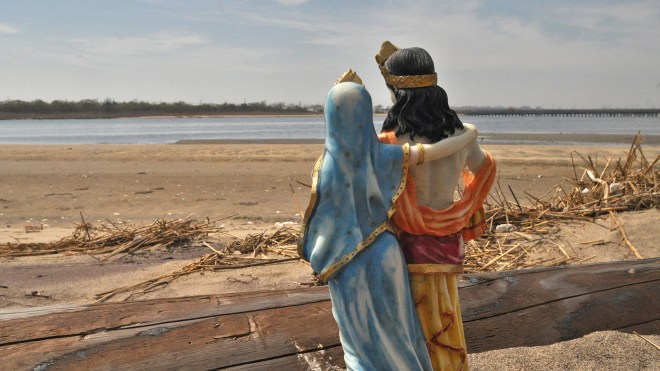 Then there’s the development on shorelines around Jamaica Bay and throughout much of Gateway, like the car dealership built on the Four Sparrows marsh and proposed apartment complexes along the eastern shore of Rockaway peninsula. Too many people have already forgotten Hurricane Sandy’s harsh lessons about the importance of wetlands and dunes for absorbing storms. Proposed runway expansions at JFK airport would replace flocks of sandpipers with fleets of jumbo jets.

The airport’s vast swaths of mowed turf grass provide prime habitat for Canada geese, whose swelling population threatens to denude the aquatic vegetation that feeds dozens of waterfowl species. This has led to controversial goose culls, pitting people impassioned by the welfare and moral value of individual animals against those who take a population-level view — a particularly thorny problem, with fair arguments made on both sides. It’s a terrible thing for migrating tundra swans to arrive hungry and exhausted from their continent-spanning journey and find no sustenance; it’s also terrible to kill geese who have feelings, families and relationships, and have become overpopulated — in our eyes, not theirs — because of a human fondness for lawns.

Making Jamaica Bay more inviting to visitors poses its own challenges. As with other national parks, access to Gateway is balanced against the well-being of natural communities, and indeed against the very idea — more important now than ever — that parts of our world should be protected for their own sake, treated as homes for other species rather than extensions of our backyards. If Jamaica Bay isn’t a wilderness, it’s certainly wild, and that wildness will suffer from the construction of more trails and access points and visitor centers. At the same time, people can’t be expected to appreciate what they can’t experience. I learned to love Jamaica Bay precisely because I could walk its shores. Again, a thorny problem. 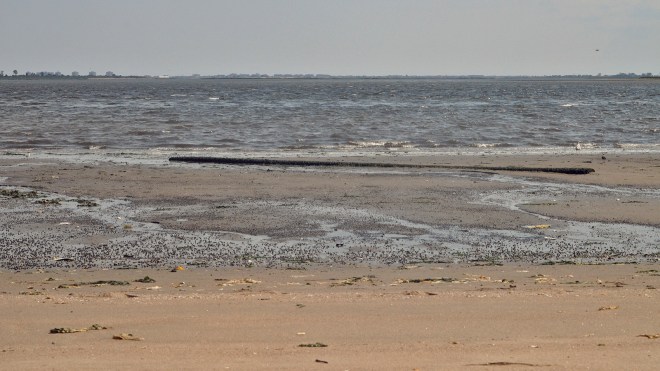 Even though the bay’s problems are abundant, there are abundant reasons for hope. Pilgrims leave devotionals in the bay because the waters are sacred, so they can learn to worship in a less harmful way. New state legislation has forced sewage plants to clean up and also thwarted cruise ship companies from dumping pollutant-laden dredging sediment into other parts of the bay. Compared to just a few years ago, Jamaica Bay’s waters are noticeably cleaner.

These improvements didn’t just snap into being. They came from hard, constant work by the community groups, conservationists and concerned citizens devoted to the health of not just what’s protected by the National Parks Service, but all of the bay’s 28-square miles. For every turtle-smashing yahoo on a Jet Ski or property developer happy to hand the burden of short-sightedness onto future generations, someone is counting horseshoe crabs by moonlight and attending public meetings. And while thoughtless development is a constant threat, other people — like those at Jamaica Bay’s new Science and Resilience Institute — want to make the area a living laboratory for innovations in resilient, ecologically sound engineering, building wetlands and dunes rather than futile seawalls and doomed neighborhoods.

Jamaica Bay’s natural features will not remain as they are now. Yet change is not a one-dimensional process; it comes with gains and losses. If marshes become mudflats, they will still have a tremendous and unappreciated ecological value, says marine biologist John Waldman. “I don’t see why the bay’s biodiversity should diminish,” he says. “Rather than diminishing, I believe the biodiversity will change.” Waldman thinks the New York Harbor region may become much like Chesapeake Bay. Will the new habitat be as rich as before? Perhaps not, but that’s no excuse for inaction or despair. After all, Chesapeake Bay is a treasure. 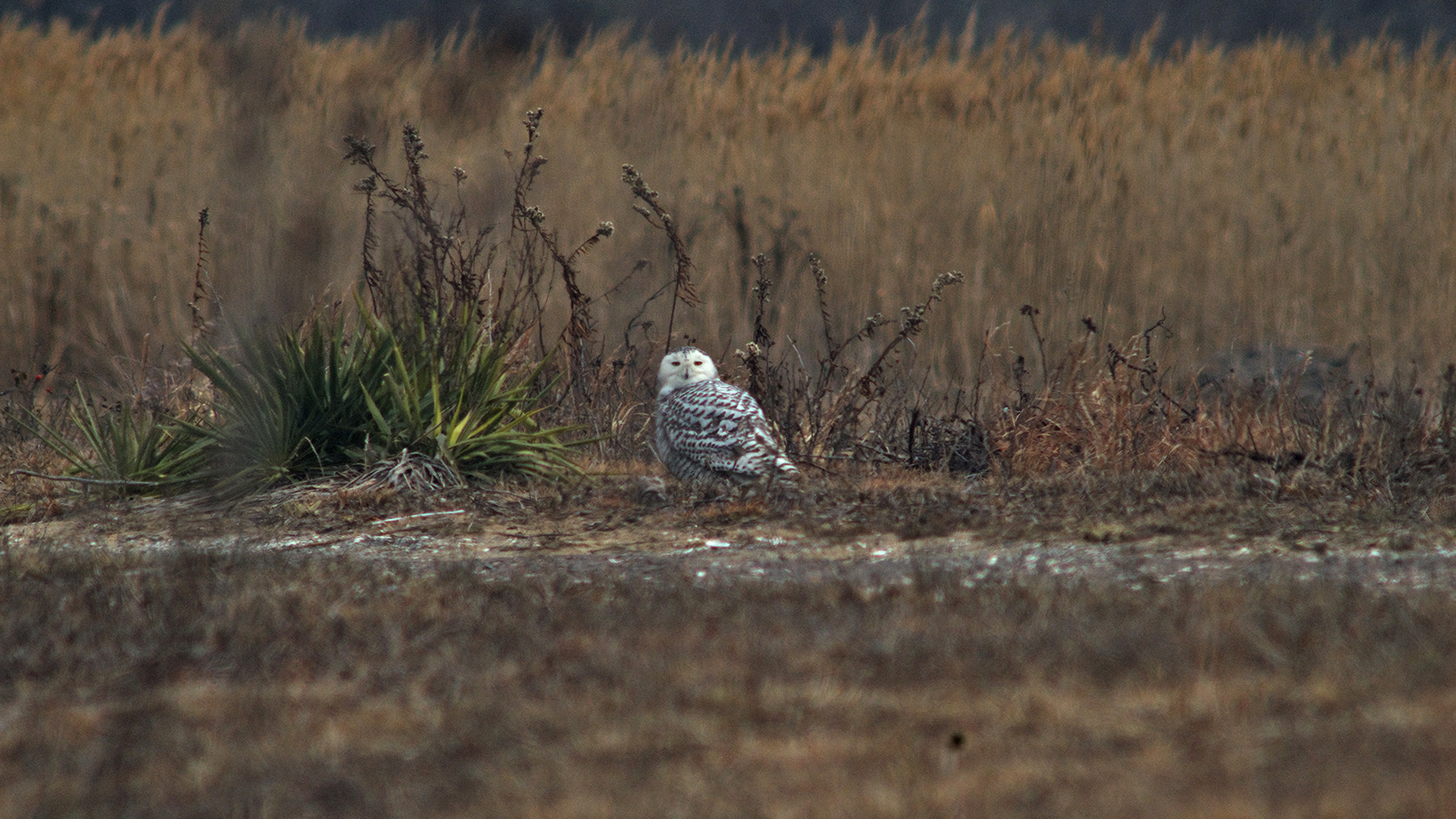 As seas rise, Jamaica Bay’s islands need not be lost to the tide. People might restore them, or build new ones. The bay’s history testifies to human intervention. A 45-acre freshwater pond breached during Hurricane Sandy and now being restored is a legacy of Robert Moses, the infamous urban planner whose machinations shaped New York City. It’s the region’s largest freshwater pond, and no less lively and wonderful for being man-made. As Jamaica Bay’s tidal wetlands shrink, people may build more wetlands for storm control, and research suggests more will form naturally in the Hudson River estuary. New wetlands will require people to care for them, just as people now protect Jamaica Bay.

Of the many ways Jamaica Bay’s issues resonate with other national parks — nearly all of which grapple with climate change, unwanted species, and wear and tear from crowds — this need for constant vigilance is, I think, the most important. That’s the bay’s great moral, a lesson applicable to the future urban parks so vital to human experience and America’s natural richness, and to the National Park Service at large. People need to care. They need to work. Not just NPS employees, but citizens, too.

In a less-populated time, it might have seemed like the national parks didn’t need our help, that they could thrive with benign neglect and the stewardship of a few people in uniform. If that was ever true before, it’s certainly not true now.

Yellowstone’s wolves and grizzlies are shot when they venture outside the park’s boundaries. Solar panel farms threaten the bighorn sheep of Mojave National Preserve. Fresh water is diverted from the Everglades into adjacent farms and then, laden with fertilizer pollution, pumped back in. Almost every park is faced with the equivalent of Jamaica Bay’s runway expansions and thoughtless construction.

Gateway was created “so that people could experience nature in the midst of crowds,” public affairs officer Daphne Yun told me. It’s “for those who may not have a chance to go to Yosemite or Yellowstone.”

Jamaica Bay now offers an example, even an inspiration, for lovers of those famous parks and all imperiled wild places. If we care about them, we’ll need to work for them — and if we do, nature may yet thrive among us, resilient and abundant. Jamaica Bay has problems. It’s also a success.