Gas is cheap — about $1.73 on average nationwide on Friday — and that means Americans are driving more miles than they did back before the recession when gasoline topped $4 per gallon.

Thanks to greater fuel efficiency, however, gasoline consumption is lower than it was at its peak in 2007, even though Americans are driving more than they did nine years ago, according to a report published this week by the U.S. Energy Information Administration. 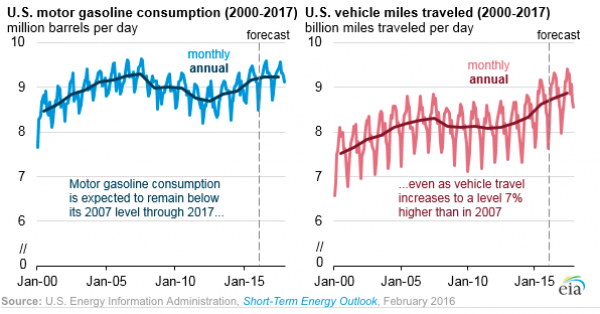 “There’s a tremendous run-up in fuel efficiency since 2007,” EIA analyst Michael Morris said. “You can have static gasoline consumption because of fuel efficiency.”

Americans drive a lot — about 8.9 million miles each day during the summer driving season last year, an increase of about 3.7 percent over the year before. Total miles driven last year were about 4 percent higher than in 2007. By 2017, we’re expected to be driving 7 percent more miles than we did in 2007.

But even as we drive more, growth in gasoline use is expected to flatten out. Gasoline consumption will likely be 0.6 percent below 2007 levels both this year and next year, EIA data show.

“The combination of an increasing share of the baby boomer generation reaching retirement and continued increases in vehicle fuel economy is expected to limit growth in motor gasoline consumption,” the report says.

Carbon dioxide emissions from the U.S. transportation sector peaked in 2007 before bottoming out in 2013. They’ve been increasing slightly since then.EIA

Light-duty vehicles are just a part of the transportation sector, which, overall, has a long way to go to reduce emissions.

Carbon dioxide emissions from burning fossil fuels for transportation — that’s cars, big trucks, trains, and airplanes — peaked in 2007 before the recession, falling to 126.7 million metric tons of carbon dioxide in February 2013 from their monthly peak at 174.7 million tons in August 2007. They’ve been ticking up slightly since then, but still far below 2007 levels.