How do you get people to do something about climate change? For years, the answer has been to prod people into thinking about their role in causing it, to guilt trip them into action. Because any human who happens to live in North America has taken advantage of central heating, combustion engines, and the occasional monster truck rally.

A recent study in the scientific journal Climatic Change has a surprising take on this long-standing practice. It finds that asking people to think about their individual guilt in causing climate change is about as effective as asking them to think about brushing their teeth.

In other words, this research suggests that the common way organizations try to mobilize people around climate change is misguided. Better to frame it as our problem, an issue threatening all of us, than as a story of personal responsibility.

Nick Obradovich, and Scott M. Guenther, two political science PhD candidates at the University of California, San Diego, persuaded the Audubon Society to let them embed an experiment in a survey sent to an Audubon email list. In the survey, people were randomly assigned to spend four minutes writing about either how they personally contributed to climate change, or about the less-personal emissions driving how climate change. A third group was asked to describe their daily routine. How often do you brush your teeth? What about exercise?

The survey told them they were in the running to win $100 and asked them how much of their winnings they wanted to donate to help the Audubon Society’s climate change programs. That’s a common device used by social scientists to attach a numerical value to an ideal. Although giving money isn’t exactly the same as taking action, money is a hell of a lot easier to quantify and put on a graph.

Obradovich told me that he and Guenther expected people who wrote about climate change would choose to donate more to the Audubon Society than those who wrote about their daily routine, but they weren’t sure which of the two writing prompts would lead to more donations.

Well, Obradovich and Guenther reasoned, the Audubon Society is hardly a representative sample of America. More than 80 percent of Audubon Society members think that people are driving climate change. Many signed over the full $100 donation regardless of what they were assigned to write about.

So the duo hired 304 people off Mechanical Turk, a platform often used for social-science research. Compared to the general population, people on Mechanical Turk are younger, more educated, and more likely to accept climate science — though a lot less likely than an Audubon member.

The conclusion was even more pronounced. Obradovich and Guenther sent another follow-up survey to the Mechanical Turk group two days later and the results persisted. Even days after writing about the collective causes of climate change, those Mechanical Turks donated more than anyone else.

So why the difference? Obradovich’s theory is that when people grasp the reality of climate change they simply don’t want to think about their role in it. That’s true even after they cut their carbon emissions by eating less meat, commuting by bicycle, and thinking approvingly of Al Gore.

Mulling over your personal contribution is likely to result in cognitive dissonance — the discomfort felt when people realize their behavior conflicts with their values. That can go in two directions. You either change your behavior to be more in line with your ideals, or tweak your ideals to ease the discomfort. To Obradovich, choosing not to donate money could be evidence of the latter response.

I was surprised at this study, but people researching climate change communication were not. “This resonates with earlier research,” John Cook, a physicist who studies climate change denial, wrote to me after I sent him a copy of the study.

A study published in Nature Climate Change four years ago found that even climate change deniers were more likely to agree with a pro-climate agenda if they thought it would improve society as a whole. There’s also the cultural cognition research of Dan Kahan, which found that people who think of themselves as part of society are more likely to get the reality of climate change than people who consider themselves rugged individualists.

I also sent the study to Ed Maibach, Director of the Center for Climate Change Communication at George Mason University.  “Like all good research, the findings in this paper raise more important questions that they answer,” Maibach wrote in reply. The problem with thinking about your role in climate change as an individual, Maibach said, is that no one likes to feel guilty. “It makes sense that asking people to reflect on their contributions to climate change is not a good way to heighten their engagement in the problem.”

That said, even Obradovich said his research is a pathway to more research, not a definitive answer. The social science around climate change isn’t as developed as the hard science, though interest is growing. Obradovich is involved with a nonprofit called the Climate Advocacy Lab, which connects climate groups involved in advocacy with social scientists involved in climate research.

Here’s what I wonder. What would collective-minded climate messaging look like? Would it look like communist agit-prop? Or maybe old World War II posters would be a better guide. 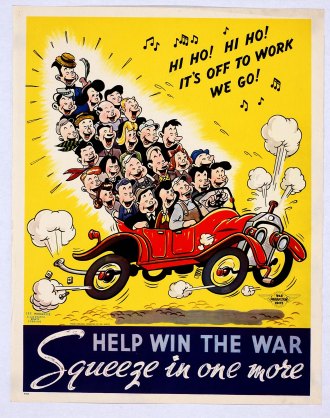 I’d argue that the climate change activism of the last few years has already shifted from messages of personal responsibility toward collective action.

The fight against the Keystone XL pipeline was one example. The struggle to get universities and pension funds to divest from fossil fuels is another. Occupy Wall Street and Black Lives Matter used similar framing: success will come when we change society, not just ourselves. A while back, I interviewed Andrew Ross, an NYU professor, about world debt and climate change. I was surprised when he gently reprimanded me for feeling bad about flying on airplanes.

”One of the favorite things of really guilty people,” Ross said, referring to every company whose bottom line depended on putting more carbon into the atmosphere,  “is to make people feel ashamed individually.”

At the time, it felt to me like a radical statement. These days, it doesn’t feel so radical anymore.