For nearly three and a half decades — longer than many of you dear Grist readers have even been alive — the fossil fuel industry has waged a campaign to obfuscate and mislead the public on the science surrounding climate change. It’s all laid out in a new report by the Union of Concerned Scientists.

The report pulls together a number of industry documents, some disclosed only this year, that show that even though the industry knew that burning fossil fuels put the planet’s climate and residents in danger — one 1995 industry report noted that “the science of the Greenhouse Effect is well established and can be demonstrated in the laboratory” — the companies campaigned to keep policymakers and the general public from arriving at the same conclusion

As early as 1977, the report’s authors note, “representatives of fossil fuel companies including BP, Chevron, ConocoPhillips, ExxonMobil, Peabody Energy, and Shell attended dozens of congressional hearings in which the contribution of carbon emissions to the greenhouse effect and other aspects of climate science were discussed.”

An email written last year by a former Exxon employee recounts that by 1981, the company was very concerned about the prospect of carbon dioxide emissions triggering climate change and bringing on regulation — so much so that it decided to forego the substantial profits that could have been earned by tapping the Natuna gas field, a huge natural gas reservoir off Indonesia, using procedures that would release a huge amount of CO2 into the atmosphere.

“In the 1980s, Exxon needed to understand the potential for concerns about climate change to lead to regulation that would affect Natuna and other potential projects. They were well ahead of the rest of industry in this awareness,” wrote the employee, Lenny Bernstein, who was once Exxon’s in-house climate expert as well as a lead author on two IPCC reports, in an email to his son, a professor at Ohio University. The email was later shared with other professors at Ohio University as part of a discussion on ethics. “Other companies, such as Mobil, only became aware of the issue in 1988, when it first became a political issue,” Bernstein continued.

But Exxon and other companies, while clear on the science, of course did continue to extract fossil fuels in locations other than the Natuna gas field. When, in 1988, James Hansen’s landmark testimony before Congress raised the alarm on climate change, the companies participated in a coordinated effort to discredit the science. Taking a page from the tobacco companies, fossil fuel industry groups chose to argue that the conclusions of climate scientists still left significant room for doubt instead of emphasizing points favored by other IPCC detractors (like that solar activity was to blame for climate change).

So, because of these companies’ political efforts — which have, at times, sunk to the level of having lobbyists forge letters from nonprofits like the NAACP claiming that minority voters opposed cap-and-trade on the grounds that it would raise electric bills — our energy economy continued to rely on fossil fuels. We know that story. The result? Humanity has generated more than half of industrial fossil fuel pollution between 1988 — when Hansen testified to Congress — and today. 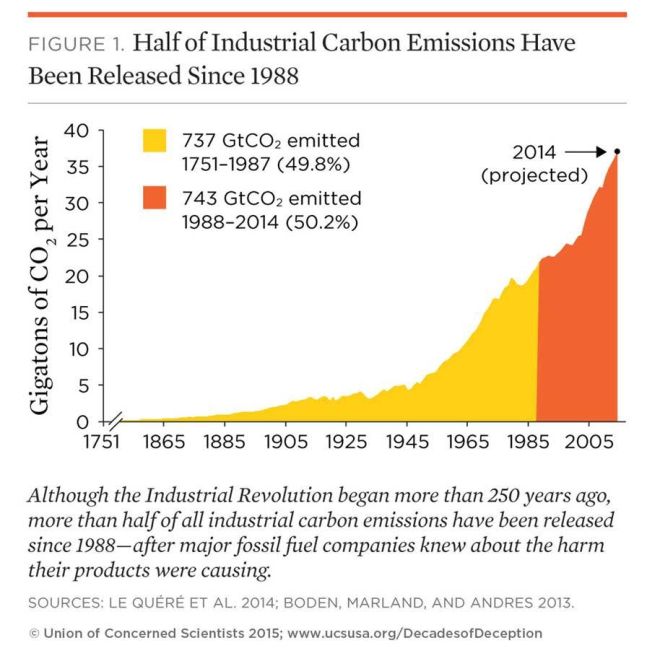 Today, ExxonMobil and other companies acknowledge climate science. Many internally use a carbon-pricing scheme, and some have publicly called on governments to set a predictable carbon tax.

But the companies are, at the same time, pushing to drill in the Arctic, making it extremely unlikely, according to recent studies, that humanity will be able to stay within its remaining carbon budget before disastrous climate effects set in. The companies have also rejected shareholder resolutions aimed at getting them to change their business practices. Some are lobbying to prevent the U.S. from reducing its emissions.

The report’s authors argue that this has to change — and that, if fossil fuel companies were actually to take responsibility for the years of misinformation, they would have to pay up.

“Communities around the world are already facing and paying for damages from rising seas, extreme heat, more frequent droughts, and other climate-related impacts. Additional investments must be made to protect and prepare communities for these risks today and in the future, and fossil fuel companies should pay a fair share of the costs,” the report reads. In a blog post, UCS’s president, Ken Kimmell, suggests that some form of compensation could be part of the U.N. process to hammer out a climate deal. “The world is increasingly focused on climate change, and the international climate conference in Paris at the end of the year offers a last, best chance to make a meaningful down payment on our obligation to future generations.”