The Republican electorate has more nuanced views on climate policy than many of the politicians it elects, according to new polling data. From the Yale Project on Climate Change Communication:

Unfortunately, as Republican politicians are often quick to point out, thinking global warming is happening is different from thinking that humans can do anything to stop it, or that it’s a bad thing. And a voter who believes that CO2 should be regulated as a pollutant is often not as keen to actually regulate the CO2 that is coming out of coal-burning power plants’ smoke stacks right now. The poll found “fewer than half of conservative Republicans (40%), and only one in four Tea Party Republicans (23%), support” the government imposing “strict carbon dioxide limits on existing coal-fired power plants.” And conservative and Tea Party Republicans make up 70 percent of the party. 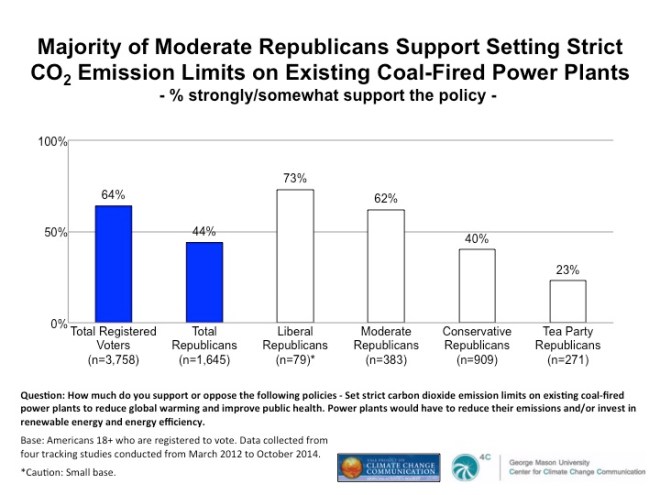 And unfortunately for that 44 percent of Republicans who support regulating CO2 from existing coal plants, as well as all the independents and Democrats in America who want to take action on climate change, the politicians currently in control of Congress tend to be beholden to the more radical elements of their party. Said radical elements are often the most politically engaged, and the most likely to turn up during a Republican primary and replace their incumbent with a previously-unheard-of, hard-right climate-change denier.

So, in an effort to keep those primarying forces at bay, 39 GOP senators have decided to remain deaf to mounting evidence and to ignore climate science, according to a Center for American Progress appraisal — that’s 72 percent of the Senate Republican caucus.

Jamie Fuller writes at The Washington Post that Republicans’ climate change views could shift — young Republicans tend to be more accepting of climate science. But such a shift would be slow, and there are powerful forces working in the opposite direction — the outsized influence of more radical elements of the party is one force, the fossil fuel industry’s multimillion-dollar lobbying budget is another.

So don’t expect Republican politicians to respond to nuance in their party anytime soon. Meanwhile, the clock is ticking.

Why reproductive rights in the U.S. are a lot like your high school ex