If you’re getting more bang for your buck at the gas pump today than you were a decade ago, you can thank the Obama administration. Obama’s 2012 updates to the Corporate Average Fuel Economy standards, or CAFE standards, made new cars more fuel-efficient and reduced their carbon dioxide emissions. But a study published this week casts a dark shadow over that success story. Researchers found that the path we’ve chosen to better fuel economy could end up costing the U.S. hundreds of lives each year.

“I think this was a classic case of unintended consequences,” said Rawad Saleh, an assistant professor at the Air Quality and Climate Research Laboratory at the University of Georgia and a co-author of the study.

Here’s what happened. To get in line with the CAFE standards, automakers leapt at a technology called the gasoline direct injection, or GDI, engine. In 2008, GDI engines were in a mere 2.3 percent of new vehicles sold in the U.S., but by 2018, that number jumped to 51 percent. The EPA expected it to rise to 93 percent by 2025 under the rules set out under Obama, which the Trump administration is trying to roll back. 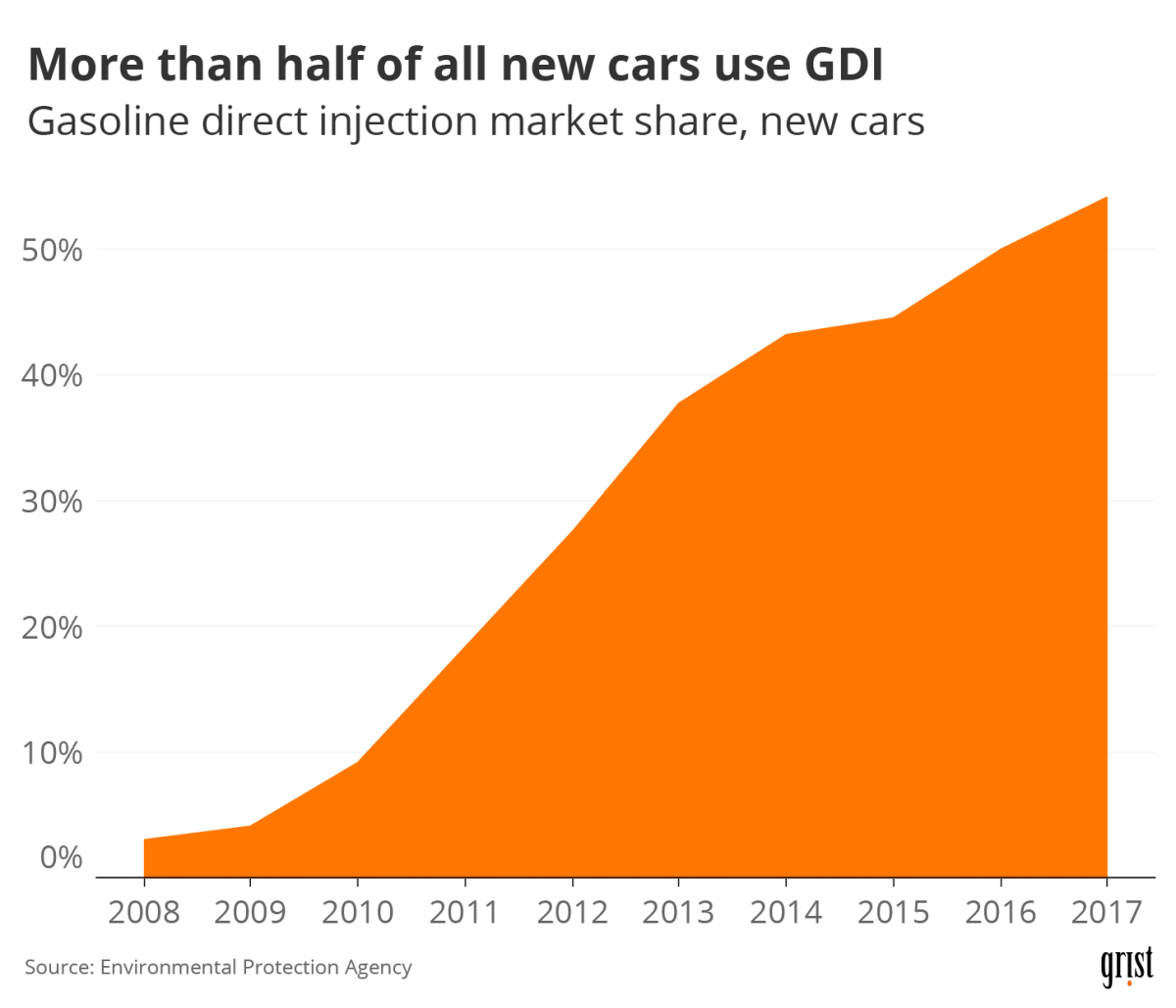 Before GDIs came along, most cars had port fuel injection engines, or PFIs. With a PFI engine, gasoline mixes with oxygen from the air, forming a vapor, before reaching the engine. In a GDI engine, the liquid fuel is injected directly. GDI engines produce more power for every drop of fuel, but the fuel burns less uniformly. The result is a car that emits less CO2 per mile driven, but the incomplete combustion creates more particulate pollution, like black carbon.

Black carbon is one of many pollutants known as “particulate matter 2.5” or PM2.5 — tiny, inhalable, solid particles that are 2.5 micrometers and smaller and are linked to respiratory diseases, asthma, and premature death for people with heart or lung disease. Exposure to black carbon has also been associated with cancer and birth defects. Unlike CO2, a gas that hangs around in the atmosphere for hundreds of years, black carbon particles float around for a few days to a few weeks before falling back to earth. The dark surface of the particles directly absorbs radiation from the sun, adding heat to the atmosphere and contributing to climate change. 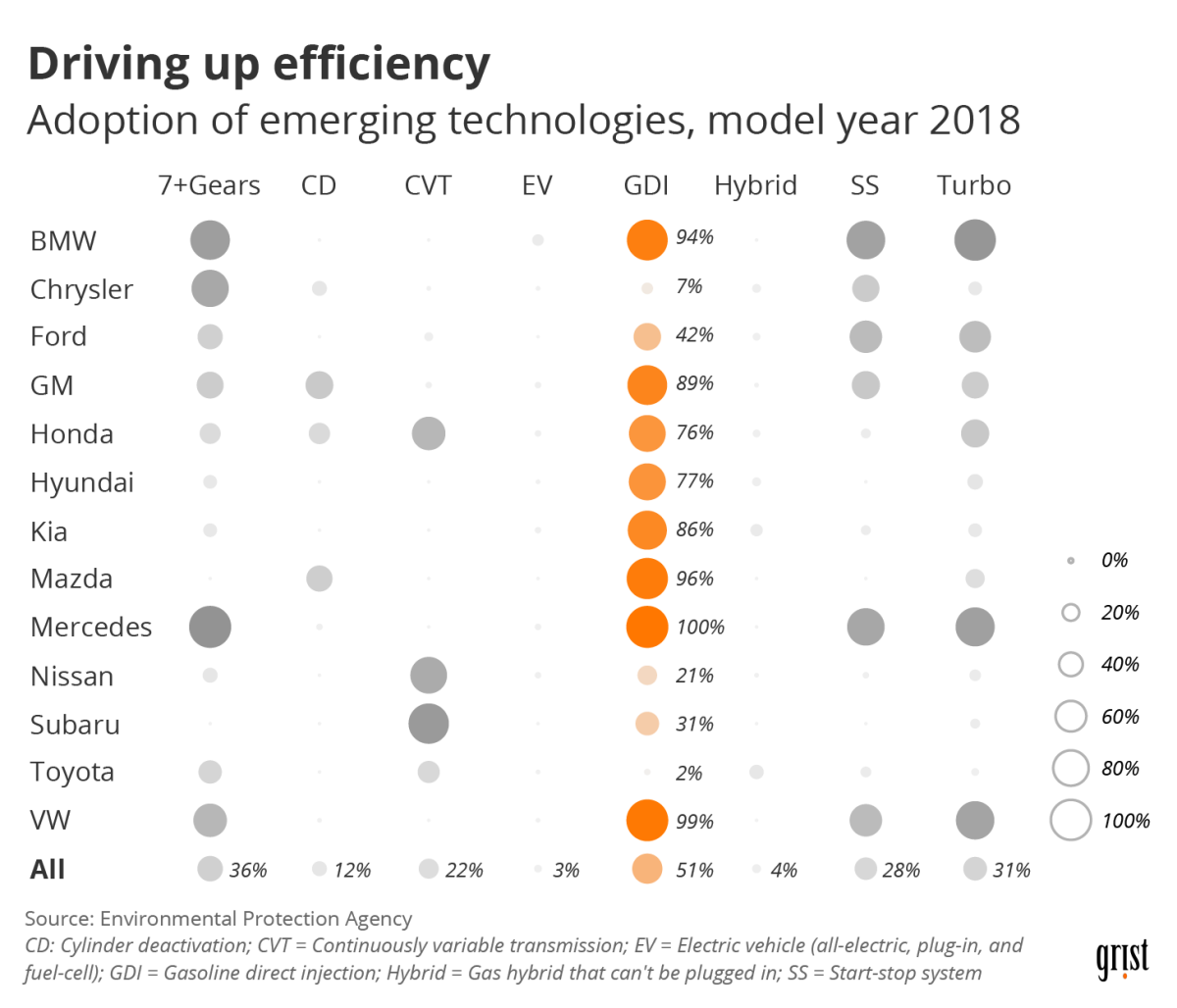 Saleh said there has been a growing body of evidence documenting the dirty little secret behind GDI engines ever since they hit the market. His team’s new study puts the issue into perspective by calculating the public health and climate costs of switching the entire U.S. vehicle fleet over to these engines. The researchers found that such a change could almost double the number of premature deaths associated with PM2.5 vehicle emissions, up to 1599 per year from 855 in 2011. The health risks would be most severe in neighborhoods surrounded by major roadways, which are disproportionately communities of color that already suffer from poor air quality, like Oakland, California.

When it comes to the climate, the question is, will the benefit of reducing CO2 outweigh the cost of increased radiation from black carbon emissions? On a global scale, the data says yes. But since black carbon is short-lived in the atmosphere, and will be more concentrated over vehicle-dense areas, the researchers also calculated this tradeoff at the regional level. They found that in areas with lots of cars, the heat absorbed by black carbon will be greater than the heat averted by GDIs’ CO2 reductions.

That doesn’t mean cities like Oakland are going to be veiled in a shroud of warming due to these particles. Drew Shindell, an earth science professor at Duke University who was not involved with the study, said that just because the radiation is absorbed in a particular place, that doesn’t mean there will be a climate response in that place. His research group, along with NOAA and the National Center for Atmospheric Research, have run models on this question, and found that the effects would be smoothed out over the whole Northern Hemisphere. “They are consistent in finding that just because you change radiation in one small spot, you don’t get a response just in one spot,” he said.

There’s one caveat to all of this, which is that there is still a lot we don’t understand about how black carbon interacts with the climate. In addition to the solar radiation it absorbs, it can also have indirect effects on clouds. Black carbon particles are little surfaces that water can condense on, contributing to cloud formation, and those clouds also affect solar radiation. Shindell said some studies have shown this indirect effect could enhance the radiation, while others show it might cancel it out.

The GDI study illustrates the danger of rushing to deploy new technology to solve complex problems like climate change without fully understanding the risks. “It shows that if you don’t think of both public health and your CO2 budget at the same time, you’re not going to make very optimal decisions,” Shindell said.

On the bright side, the study scenario is pretty unrealistic. With electric vehicles on the rise, a wholesale switch to GDI is unlikely. However, more than 50 percent of new vehicles are blasting black carbon into the environment, and those vehicles could be on the road for another few decades.

Saleh observed that the unforeseen effects of GDI engines point to the pitfalls of piecemeal climate solutions.

“Doing half-measures — not fundamentally changing our energy system, but doing half measures of improving an engine a little bit to achieve certain gains — in a way, hinders real movement toward clean energy and really addressing the climate and the public health issues at the same time,” he said.