Maybe this is obvious, but expanding our agricultural footprint to feed the growing population — cutting down forests, plowing prairies — is a really bad idea.

What’s less obvious, and more interesting/troubling, is that farmland expansion is so harmful on so many levels that it’s worth doing just about anything that helps us avoid opening up new land — even things that have their own environmental costs.

I’ve been reading back through the papers of David Tilman, an ecologist at the University of Minnesota, from the last 15 years, exploring the effect of farming on the natural world. (I should mention that these are also the papers of his many deserving coauthors, who I can’t easily credit here.) In a 2001 paper published in Science, Tilman et al. calculated what would happen if agricultural expansion continued, business-as-usual style: In 50 years, an additional billion hectares of land — larger than the entire area of the U.S. — would be cleared for farming. Algae dead-zones, like the Mississippi discharge and parts of Lake Erie, would more than double, as would pesticide use. All this “would cause unprecedented ecosystem simplification, loss of ecosystem services, and species extinctions.”

When you add, on top of that, major greenhouse gas emissions, it makes a lot of sense to do all we can to limit farmland expansion. We’d need to do this while feeding more people — so where is the food going to come from?

Well, if we entirely stopped wasting food, and divvied up equal rations to everyone on Earth, that would take care of the problem. But neither of those things is going to happen any time soon. It’s hard to completely eliminate food spoilage, even in your kitchen, where you have the benefit of refrigeration; eliminating it from the entire seed-to-plate process is nearly impossible. When it comes to divvying up rations, I’m even less optimistic: Humans aren’t very good at sharing. We’ve always had inequality, with the elites banqueting on massive amounts of expensive food while the poor go hungry. We can mitigate this imbalance, but I don’t think we will eliminate it.

That’s why ecologists like Tilman support techniques for agricultural intensification, even though they often come with problems of their own. For example, in a 2011 paper published in the Proceedings of the National Academy of Sciences, Tilman et al. took a close look at the use of synthetic nitrogen fertilizer. Producing fertilizer in a factory creates greenhouse gas emissions; so does transporting it, and applying it to fields. Worst of all, some of it turns into nitrous oxide — a greenhouse gas 300 times more potent than carbon dioxide — and escapes into the atmosphere.

Nevertheless, all of this adds up to much less climate impact than clearing new land. Tilman found that if you try to minimize fertilizer use, you end up farming more land and emitting more greenhouse gases.

Tilman also points out that there are alternatives to synthetic fertilizer: Farmers could grow legumes and cover crops to add some nitrogen. But these techniques can be hard for farmers to implement, as Don Lotter has found, particularly if they are subsistence farmers.

When you look at this kind of holistic analysis, you can see why experts have been calling for an all-of-the-above approach: Tackle poverty, reduce food waste, and use all appropriate tools that work to increase production.

The good news is that it we’re not doing too badly in this area. Since 2001, when Science published Tilman’s dire calculations, we have not continued business as usual. The land area devoted to agriculture, which had been trending steadily upward, leveled off instead, and may have even dropped a little bit, while the amount of food produced has gone up and up. Some say we’re past the point of peak farmland. 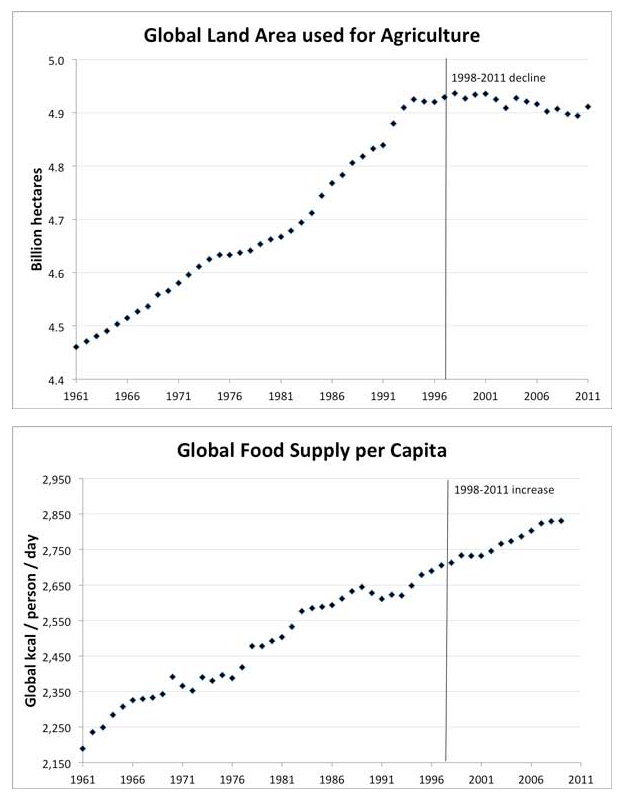 Unfortunately, we’re still a long way from peak city and peak sprawl. We’re on the right track, but we have far to go to reach sustainability. In this age of rapid growth, the status quo is untenable in many, many ways — that’s why we’re often hearing variations on Voltaire’s “the best is the enemy of the good.” In this very imperfect world, it would be foolish not to embrace imperfect methods of agricultural intensification that help stop the clearing of carbon-rich ecosystems.