When I was in college, I had a roommate who was assigned to me by a computer. The first time I stepped into the room, my eyes must have widened in alarm because the roommate leapt up to explain that this whole thing that I was looking at wasn’t her idea — it was this joke in her family that had just gotten out of hand. Nearly every object in half of our dorm room was Holstein-cow print: the sheets, the pillowcases, the bedspread, the rug, the bathrobe hanging from a hook by the closet, the slippers underneath the bathrobe, even the umbrella propped in the corner.

I nodded. This was plausible. Maybe the only bedspread she had was cow, and it was just easier to brush her teeth with that cow-pattern toothbrush. But then, how to explain the stuffed cows arranged on every flat surface, staring down at the room with their beady little eyes? And how to explain her squeal of delight when she opened a care package from home a week later and found Holstein print socks inside? Best not to ponder too deeply.

I hadn’t thought of that roommate in years, and then I found myself reading Cowed, by Denis Hayes and Gail Boyer Hayes. The book’s subtitle is “The Hidden Impact of 93 Million Cows on America’s Health, Economy, Politics, Culture, and Environment” — but if you wanted to shorten it, you could just subtitle it “Cows Cows Cows.” 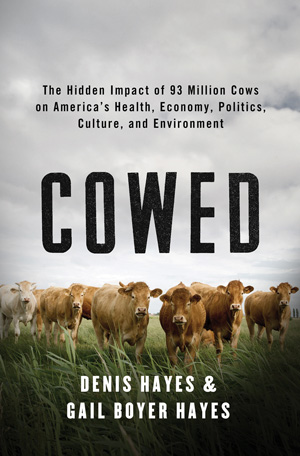 As in, check out this trippy section (from the chapter “Bewitched by Cows”):

Imagine, for a moment, that every item that contains some cow emits a soft glow. It’s late, and you’re getting ready for bed. You drop your clothes in a glowing heap (cow is used in detergents and fabric softeners). Glancing into the mirror you see that your teeth look supernova bright (cow parts are in toothpaste and mouthwash) and your lips are shining (lipstick). Your hair’s a mess, so you pick up your glowing comb (plastic) and run it through your dazzling hair (shampoos, rinses). Under your skin, the collagen you had injected to fight wrinkles glows faintly, as does your jar of anti-aging cream. Your underarms and cheeks also emit an eerie light …

I’ll stop here, but take my word that this goes on for another full page as you frantically rummage through your medicine cabinet (cows), your living and dining rooms (cows), and finally your garage (cows everywhere).

If you read Grist much, you’re well-versed on the environmental issues with cows: their gassy little climate-altering digestive systems, their impact on water quality, the way they spread antibiotic-resistant bacteria, their uncomfortably close interactions with E. coli O157:H7, the laser-guided robots that have been created to milk them more effectively.

This book hits all of those bases of cow-based public service journalism — and then goes even further. Did you know that mad cow disease can stay dormant in the body for decades, and can be misdiagnosed as Alzheimer’s or dementia? That vat-grown meat is fed with a juice made of unborn cows? (“Thermodynamics offers no free lunches,” the Hayeses write sagely.) That Holsteins dominate the dairy-cow biz because they are the breed most capable of eating a lot of corn and not dying? That a bison’s shorter eyelashes are better adapted than a cow’s long ones to extreme snowstorms? That, pound for pound, there is two and a half times as much living cow as there is living human in America? Now you do.

Cowed‘s authors have seriously green resumes. Gail Boyer Hayes is a writer and an environmental lawyer, and Denis Hayes was national coordinator of the first Earth Day and a solar bigwig in the Carter administration, and is now president of the Bullitt Foundation. Denis Hayes is also a longtime Grist supporter who has written for us in the past.

The fact that the they’re such longtime environmental movers and shakers gives their reporting a genteel quality — sort of like Murder She Wrote, but with cows. The duo first comes up with the idea for the book “at a thatched-roofed B&B deep in the verdant countryside of Devon, England.” They are inspired to check out a local dairy operation because it happens to be close to the fundraiser they are attending at a local winery. They first learn about prions while in Stockholm, celebrating the fact that Gail’s father, Paul D. Boyer, has just won the Nobel Prize in chemistry.

This is a calm book, even when it delves into some seriously gross territory. If you needed to explain to a non-comprehending parent why you are becoming a vegetarian, for example, Cowed would probably go over more smoothly than, say, the legendarily hyperbolic Diet for a New America.

The Hayeses frequently reassure the reader that they aren’t coming to take away anyone’s burgers. “Humans could survive without cows, but our lives would be poorer for it,” they write, before giving a shout-out to the cow whose pericardial tissue went to repair the heart valve of Gail’s mother. “Gail’s mother became part cow … the anonymous donor cow has a special place in our own hearts.”

The goal of Cowed is not so much to stop people from eating cows as to cut that slightly over-a-pound of beef that the average American eats every week down to half a pound a week — and to ensure that said half pound is sustainably and ethically raised. “Think of this as the Thomas Jefferson diet,” they write, as if to head off any charges of un-Americanism right there at the pass. “Our third president was a health-conscious man who preferred vegetables to meat.”

If you’ve already read the classics — like Fast Food Nation, or “Power Steer” — Cowed may feel like overly familiar territory. If you want a broad and breezy introduction to the general state of the American cow, this is a solid place to start.

Still bewildering to me, though, is the sway that cows have over our national imagination — the talking cows in television commercials, my roommate’s Holstein socks — even while the lives most of them actually live are so gruesome. That’s a mystery I’ll have to work through on my own.