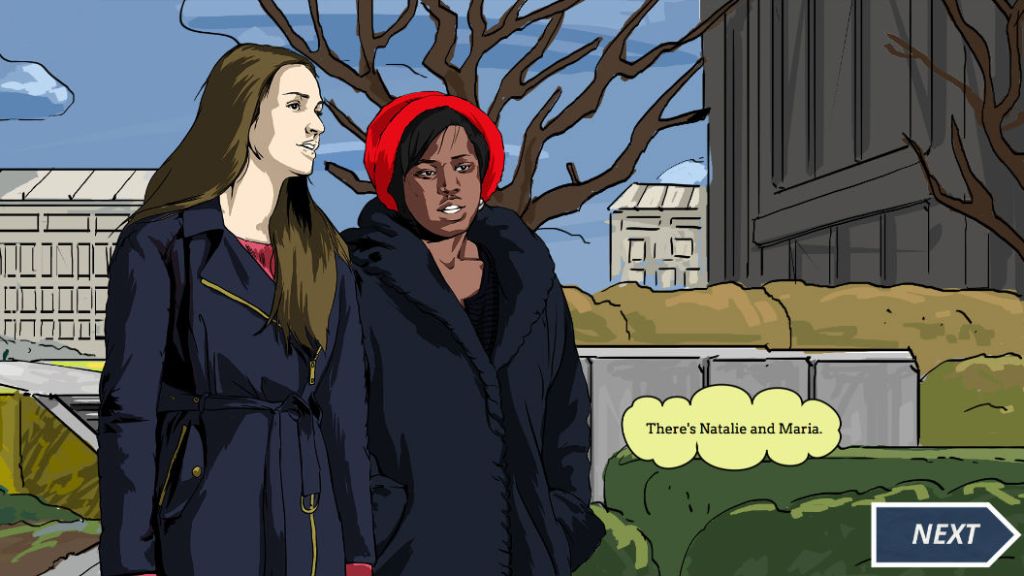 Stephanie Fawaz and Kirsten Rispin, students at Carnegie Mellon University’s Entertainment Technology Center, were given a fairly onerous assignment: Make a video game that can change how we think about sexual assault prevention … and also isn’t head-clutchingly, eye-rollingly lame.

Over the course of 15 weeks, Fawaz, 22, and Rispin, 30, led a team of six graduate students to create Decisions That Matter, an interactive, graphic-novel style video game. It follows a set of characters through a series of fairly typical college activities, like making your friends wait for you to get out of bed to go to lunch, or drinking jungle juice and grinding at a party with shitty EDM (who wasn’t guilty of both at 19?). At the risk of calling a sexual assault game fun, it’s actually pretty engaging — which is exactly the point.

The traditional attitude around sexual assault prevention is that the potential victim is responsible for preventing his or her own rape: Don’t walk alone at night, don’t drink at parties with strangers, keep your doors and windows deadbolted at all times. OK, but the real matter at hand is: How do we stop rapists from committing rape? And how do we get people to take campus sexual assault, a simultaneously well-tread and widely neglected issue, seriously?

I talked to Fawaz and Rispin about how they made the game, and also why we need more women in the video game industry. (The conversation below has been edited and condensed.)

When Jess Klein, CMU’s Coordinator of Gender Programs and Sexual Violence Prevention, came to you with the challenge of creating an educational video game on sexual assault, how did you decide to take the approach that you did?

Stephanie Fawaz: A lot of existing applications [to educate about sexual assault] aren’t taken seriously — some of them are video reenactments that are cheesy and not believable. And others are info dumps, and they’re not engaging in any way. So it really causes people — especially college-age and high school-age students — to not take seriously what is a very serious issue, [an issue that] demands a lot of respect and isn’t given it.

Kirsten Rispin: We really wanted to make something that could at least start conversations that could begin to change young people’s views on the subject matter, and hopefully begin to change a culture — even if it was going to be a very slow evolution. So that was our jumping off point: How do we do that? And I think that everyone was pretty much in agreement early on that a story was going to be the best way to do that — a story that had characters that you could empathize with, and a story that you could get invested in.

Why did you focus on the bystander’s role in sexual assault prevention, as opposed to the potential victim?

SF: The application is very much focused on identifying and preventing a sexual assault before it happens, rather than dealing with the aftermath of it or coming into it in the midst of it. I don’t want that — I want something that prevents it before it happens. From there, together, we sort of sprung the idea of [focusing] much more on the bystander, [and] a lot of students could be possible bystanders.

It’s pretty easy for college-age students — men in particular — to think: “This isn’t really my problem. I’m not going to sexually assault anyone because I’m a good guy, and I’m probably not going to be sexually assaulted, so I don’t want to think about that kind of stuff.” And we wanted to bring attention to those people, like: “No, listen — there is stuff that you can do to help other people.”

Were there any pitfalls of typical conversations around sexual assault that you were specifically trying to avoid?

KR: We tried to shy away from being stereotypical, because we felt that a downfall of a lot of existing [applications] was that they relied too much on stereotypes. Stephanie really went into the development of the characters in the story. We took a lot of time to flesh out who these characters were. Natalie [the female protagonist] is not a helpless girl who gets herself in a bad situation. There’s much more going on to her than that. And Luke [the male protagonist] isn’t this fumbling guy who kind of didn’t know what he was doing. We very much wanted these characters to have dimension to them, and to be complex.

In real life, there’s a social risk to intervening — we know that, and it’s awkward and it’s uncomfortable and it’s scary at times. So knowing those feelings, we wanted to replicate those in a standalone electronic thing — which seemed almost impossible at the time.

Did you think that it was important for women to be leading the design team for this project?

SF: It’s really important to me that women can bring their perspective in and have it fulfill a very creative role in guiding the direction of an issue like this. [Because this issue] comes down on us a lot, and sometimes in ways that are very small and subtle but they starts to build up and it sucks. We wanted to bring all the things that we knew to light, like: These are things that happen, they matter, they’re important, and this is what you and the person who doesn’t experience this can do to help us out.

Did you ever feel any pressure as women leading such a project on such a fraught, sex-sensitive issue — particularly in such a typically male-dominated field as video game design?

KR: Coming into the fall semester, the whole Gamergate thing was really exploding. And I was very impressed that the head of [our] program took the time to address that CMU does not, in any way, shape, or form, feel that this should be a male-dominated industry. In our class, I think the female-to-male ratio is 50:50, which I think is a first.

SF: [But] this year at ETC, our class is really programmer-heavy, and a lot of [the programmers] are men. I think there are about 30 programmers, and four of us are girls — so there’s a little bit of pressure when you look at that demographic.

For this particular project, it was interesting because the programmers [on the team] were two men and me. And because I was doing a lot of the writing and producing and designing, I didn’t get into programming until maybe the last third of the project. And there was an extent to which I was basically explaining to the men of the group, “No, this should be portrayed this way, and we are putting things in this order because this is the idea that we want to convey, and it’s really important to us.” And they were always very good at listening to us and being respectful. I think the male team members on Decisions That Matter definitely learned a lot.