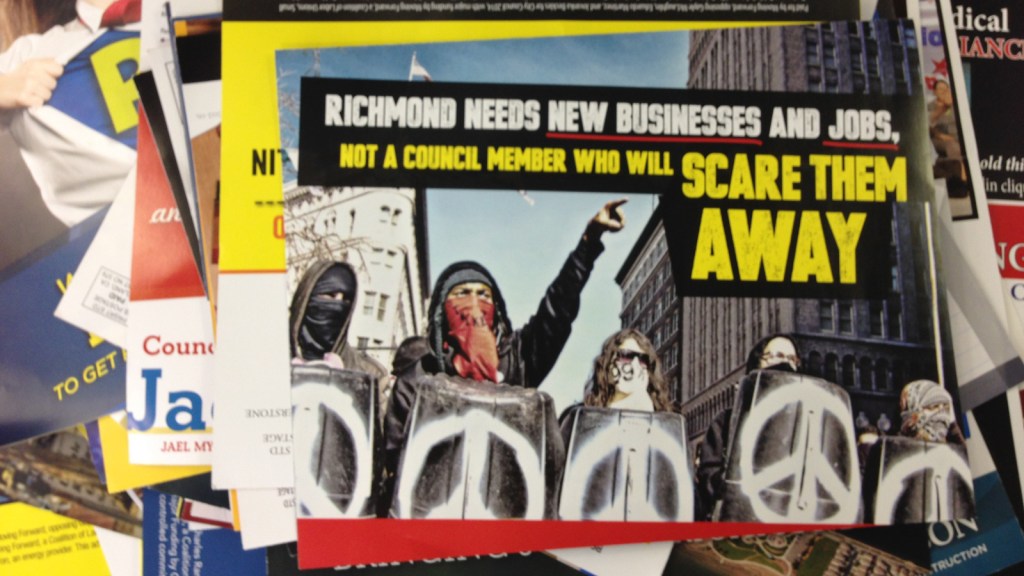 At the headquarters for the Richmond Progressive Alliance (RPA) Tuesday night, a man in a superhero mask made to look like the Chevron logo was capering around, handing play money to people and saying, “Vote for me!”

It might have been a depressing piece of political theater, but given how the election turned out, it wasn’t. By the end of the night, it was clear that the RPA’s entire slate of candidates had won by a landslide — despite Chevron’s funneling at least $3 million into defeating them (about $72 for each registered voter in the city).

RPA city council candidates Eduardo Martinez, Jovanka Beckles, and outgoing mayor Gayle McLaughlin all won, and RPA-endorsed candidate and city council member Tom Butt became the city’s new mayor. Butt’s election will free up a city council seat, which the RPA will try to fill with one of their own. If that happens, the group will have the four votes that will give them a majority on the council.

The campaigning continued right up until the end. Moving Forward, a political action committee funded primarily by Chevron, portrayed the RPA’s candidates as a group of commie troublemakers who couldn’t decide which they loved more, Cuba or Occupy Oakland. The morning of the election, a last-minute hit piece appeared in the Richmond Standard, a newspaper created by Sam Singer and Associates, a PR firm that often works with Chevron, alleging that “supporters of Team Richmond, candidates supported by the Richmond Progressive Alliance, have been harassing voters” at polling places.

What does this victory mean for Richmond? It means that Chevron — which runs 10 percent of its global sales through its Richmond refinery — will be under even more pressure to install the kind of equipment that will reduce pollution in the area. It means that the city’s comprehensive and ambitious Richmond General Plan 2030, which has an entire section on climate change and reducing greenhouse gas emissions, actually has a chance of getting implemented.

Richmond’s more ambitious progressive projects have won another few years to work themselves out — plans like the city’s choice of Marin Clean Energy as the default energy provider for Richmond residents, the city’s innovations in police work, and its attempt to use the threat of eminent domain help citizens renegotiate underwater mortgages. (That last one raised the ire of the National Association of Realtors, who donated $118,000 to the RPA’s opponents.) The election outcome also means that the RPA is likely to become a model, nationally, for grassroots organizing on the citywide level.

It’s also likely that Richmond city council meetings are going to get a lot more boring. Back in 2010, the RPA endorsed a former drag racer and longtime Richmond resident named Corky Boozé for city council, on the basis of shared opposition to a casino proposal. There is some disagreement over what happened after the election.

“I’m independent. I’m on my own, and I always have been,” said Boozé, when I interviewed him at his unofficial campaign headquarters inside of Casper’s Hot Dogs on MacDonald Avenue. “He crawled into bed with Chevron and basically hung out a ‘for sale’ sign,” said Andres Soto, one of the RPA’s organizers.

Whatever his alliances, once he was elected, Boozé moved frequently to block RPA legislation. Meetings became contentious and dragged on until 1 a.m., and even innocuous decisions, like whether or not to approve a new public restroom, slowed to a crawl.

When we talked, Boozé was two days away from losing his council seat to relative newcomer (and RPA endorsee) Jael Myrick. In his opinion, the RPA were outsiders, using Richmond as a platform for their political beliefs. “Everything they have done has had a link to outside the city,” said Boozé. “They wanted to pass a resolution condemning Israel for raiding some flotilla.”

Indeed, talk to the RPA and you’ll get a sense that this is a group that has rarely met a left-wing cause that it didn’t like. These are some of the leftest left-wingers out there. But they are also experienced and pragmatic political organizers.

When Tom Butt, a city council member and real-estate developer, announced that he was entering the mayor’s race back in August, Mike Parker, the RPA’s candidate, withdrew, rather than split the progressive vote and wind up electing Nat Bates, the Chevron-backed candidate. “Tom is with us maybe 80 percent of the time,” said Soto. “That’s still better than Nat being with us 10 percent of the time.”

Even Parker was something of a compromise. Soto and other RPA members had been hoping for a “strong female candidate”; since Richmond began to elect mayors instead of rotating the mayorship among the city council, the city has seen more women get elected than men.

The RPA endorsed Butt’s campaign, but the two rarely appeared at each other’s events and seemed to exist in entirely different worlds. The RPA’s headquarters — covered in hand-painted posters, portraits of Cesar Chavez and Malcolm X — were surrounded by storefronts that either were out of business or looked like they were about to be.
Tom Butt’s campaign headquarters are located in Point Richmond, where there is a Starbucks, and twee stores sell handmade crafts. Even the air feels different, because Point Richmond has trees — not just one tree, looking sickly and drooping in the middle of a concrete plaza, but lots of them, just hanging out and doing their thing.

And here’s the thing about the election and the likelihood of the RPA continuing to achieve its agenda: the less polluted and more livable Richmond gets, the more money there is to be made building condominiums and selling them to people who are priced out of Berkeley. If you’re talking about political gains, the RPA is in the catbird seat. But if you’re talking about potential financial gains, the big winner of this election, and of this shift in power between the city of Richmond and Chevron, is Tom Butt. The guy is, after all, a real-estate developer.

Which is another way of saying that environmentalism — like any political struggle — builds some strange alliances. This election is over, but Richmond is a city to keep on watching.