Why does Joe Biden call climate change an ‘enormous opportunity’? 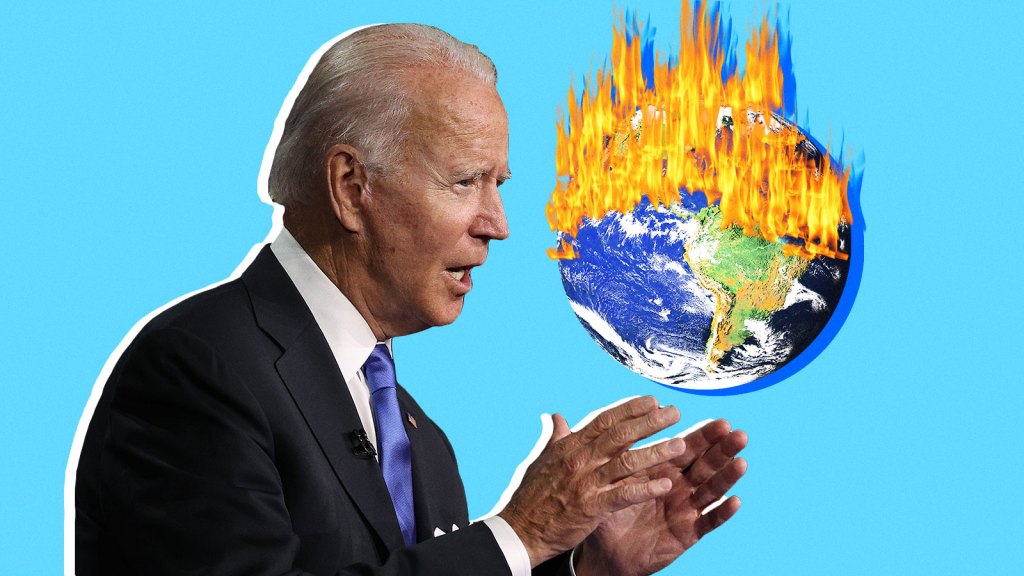 Why does Joe Biden call climate change an ‘enormous opportunity’?

Flanked by American flags, Joe Biden delivered an optimistic speech to accept the Democratic nomination for president last week, laying out his vision for the future of the country. “This is our moment,” Biden said, not in spite of, but because of this confluence of catastrophes: the worst pandemic in a century, massive unemployment, and the slow-burning climate crisis.

“We can, and we will, deal with climate change,” Biden said. “It’s not only a crisis, it’s an enormous opportunity. An opportunity for America to lead the world in clean energy and create millions of new good-paying jobs in the process.”

You’ve heard some version of this before: Every crisis brings with it an opportunity. Big investors pitch it to struggling businesses. Coaches of losing teams cite it as a reason for hope. The saying turned into a cliché long ago, yet holds a seed of truth. If something is a wreck, why not start something new?

In the same way that the Great Depression paved the way for the New Deal, the climate crisis could usher in a Green New Deal, a vision of a cleaner, more equitable, and more prosperous world.

This “turning point” idea figured prominently in Biden’s speech, which pitted light against dark, hope against chaos. “America’s history tells us that it has been in our darkest moments that we’ve made our greatest progress. That we’ve found the light,” he said. “And in this dark moment, I believe we are poised to make great progress again.”

Politicians, business executives, and activists alike use the “opportunity” framing to inspire hope when the cause seems lost. Biden’s focus on job creation ties into a long history of trying to connect climate change to issues that might resonate more with non-environmentalists, including national security, religion, and public health. It’s all part of Biden’s “build back better” agenda, which seeks to create a bajillion jobs while cleaning up the grid. After all, moderate Democratic voters tend to be more concerned about the economy, health care, and COVID-19.

But you could dismiss the idea of climate change being an “opportunity” as naive or insensitive; people are dying! Isn’t acting on it a necessity?

Just as businesses make money by manufacturing weapons during wartime, they can also take advantage of the “opportunity” of environmental chaos. In The Shock Doctrine, Naomi Klein coined the phrase “disaster capitalism” to illustrate how corporations can turn problems into profits. Companies are already buying up water rights as freshwater supplies dwindle and navigating through increasingly ice-free Arctic waters to ship fossil fuels around the world.

Climate activists have been trying to “reframe” climate change for ages, hoping to induce passion among an apathetic public. Yet the research on what framing really garners public support has been inconclusive. One paper surveyed the literature in 2016 and concluded that there was no “robust empirical evidence” that alternative framings, including the one about economic opportunity, would increase support for climate policies any more than the conventional frame that we need to reduce the risks associated with a warming planet.

What does work, according to longtime Republican communications wizard Frank Luntz, is repeating a message over and over until it sticks. Highlighting the positive side of climate action doesn’t necessarily mean mentioning the word “opportunity” at all. Luntz has suggested talking about climate change as a “no-regrets strategy.” Policies to curb pollution, after all, would lead to cleaner air and water, less dependence on foreign oil, and better national security.

“And that’s if the scientists are wrong,” Luntz told the congressional Climate Crisis Committee last summer. “If the scientists are right, we get all of those things and begin to solve what could be the most catastrophic environmental problem that any of us have ever faced … That’s why it’s the right thing to do.”