A carbon tax back from the dead? Stranger things have happened. 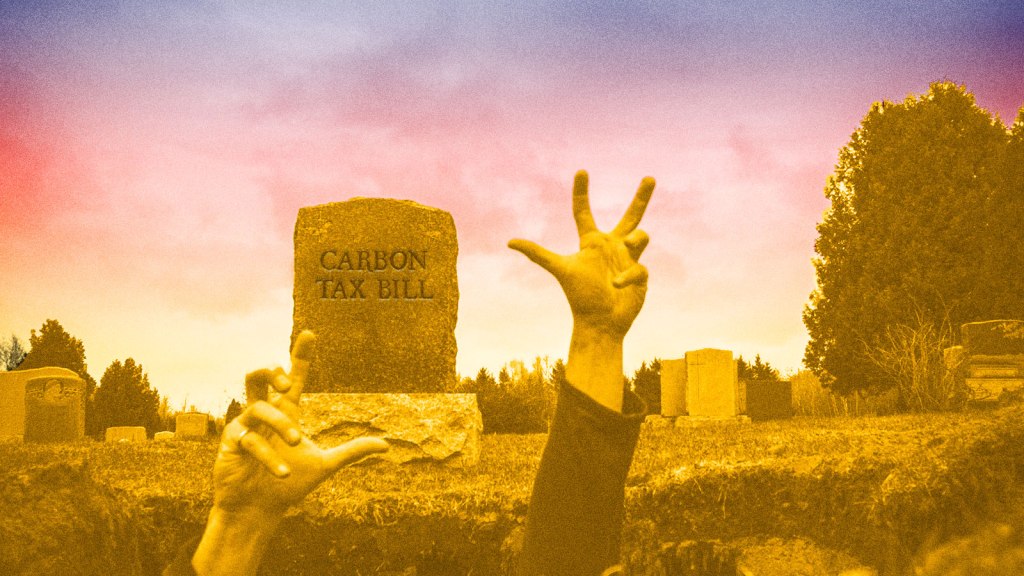 A carbon tax back from the dead? Stranger things have happened.

The politics of taxing carbon is trickier than ever, but that didn’t stop a group of lawmakers from reviving a carbon tax bill like a zombie from the grave.

The Energy Innovation and Carbon Dividend Act was brought to life again on Thursday in the House of Representatives by the bipartisan Climate Solutions Caucus. Originally introduced in November and later in the Senate, it marked the first bipartisan climate bill entertained by Congress in a decade. And then it languished. Now it’s back and ready to take a bite out of your brains — er, I mean, gas-guzzling habits.

The proposal would charge a $15-per-ton fee on coal, gas, and oil soon after they leave the ground, then rise $10 every year. It’s revenue-neutral, meaning that all the money collected would be sent to Americans in the form of a check. If President Trump signed it into law this year (yes, yes, we know) it could have a dramatic effect on greenhouse gas emissions, essentially putting the U.S. back on course to meet or even exceed the cuts promised by the Obama administration in the Paris Agreement.

What could possibly go wrong? Well, let me introduce you to my friend, politics.

For one, no carbon tax yet exists in the United States (but it has a cousin up in Canada). The last attempt was shot down by voters in Washington state in November.

Another obstacle is getting conservatives on board. The Climate Solutions Caucus, a bipartisan group of House representatives working on climate change, lost almost half of its Republican members in the midterm election. Representative Francis Rooney from Florida is now the lone Republican on the list of co-sponsors for the reintroduced bill. The other six are Democrats.

To top it off, the idea of putting a price on carbon is getting attacked from the left, too. “There used to be people who were blanket supporters of this, but it’s gotten more controversial,” Reynolds said.

Earlier this month, for instance, more than 600 environmental groups sent House representatives a letter outlining what they envision for a Green New Deal. In addition to the usual progressive climate goals, the letter made some new and unusual demands, including a promise to “vigorously oppose” any climate legislation promoting “market-based mechanisms” (read: a carbon tax or cap-and-trade scheme).

Progressives also might balk at the bill’s stipulation that prevents the EPA from regulating carbon emissions for at least 10 years after it becomes law.

“Bipartisanship isn’t sexy right now,” Reynolds said. Even so, he says his organization has been trying to reach out to left-wing groups that don’t believe in market solutions to “see what we have in common with them.”

There’s reason for optimism. Unlike last year, the House is now run by Democrats clearly more sympathetic to the cause than Republicans. But a carbon tax also has bipartisan support in high places. Big-shot economists from the right and left, including those who worked for Republican presidents, just announced their support for a revenue-neutral carbon tax. The world’s top scientists say a carbon price is “central to prompt mitigation” (in tandem with other stringent climate policies).

There’s also burgeoning public support for action. More Americans understand the risks climate change poses to their lives than ever before, according to recent surveys. About half of Americans say they’d support a revenue-neutral carbon tax, according to a new poll from the Associated Press-NORC Center for Public Affairs Research at the University of Chicago. That kind of public support is something that members of Congress pick up on, Reynolds said.

The larger goal, in other words, is broader than simply getting the bill passed through Congress. “We are trying to change the conversation,” he said. “We’re trying to prove you can work with people in a meaningful, respectful way, and get good results doing so.”

So will the bipartisan carbon tax live on this time, or will it meet a second untimely demise? The next steps are to push for a vote in the House and resuscitate the Senate’s version. You know what zombies say: If at first you don’t succeed, rise, rise again.