If you know New York City, you’re familiar with rolldown gates. Also known as “riot gates,” they’re the ribbed metal walls that shopkeepers installed after the riots of the 1960s. At night, when stores are closed, they roll down in front of the windows and doors to protect what’s inside. The result is a cold, blank face turned to the community and a magnet for graffiti.

In recent years, with declining crime and hyper-gentrification, new businesses in affluent neighborhoods have forgone the gates. Now, you can walk around parts of the city at night and see dresses worth hundreds of dollars hanging just inside a boutique’s unprotected glass windows. There aren’t many stores like that, though, in northwest Harlem. Although the neighborhood’s handsome brownstones and pre-war apartment buildings are gradually bringing in more young professionals, the neighborhood is predominantly working-class, African-American, and Latino. The bodegas, pharmacies, and nail salons still have their rolldown gates.

But some of the gates are getting a facelift. 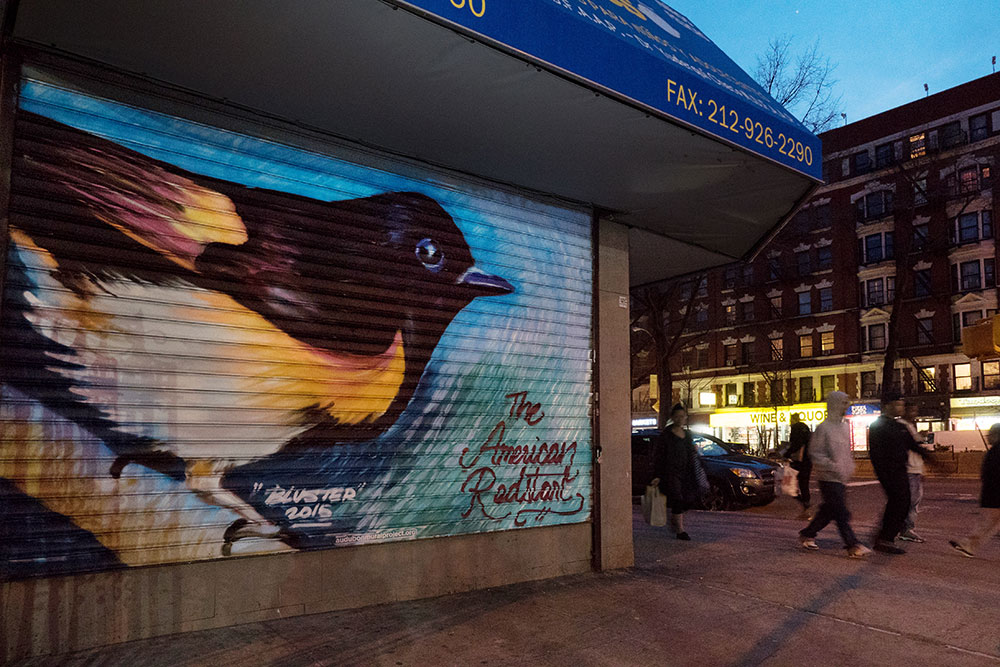 The National Audubon Society is commissioning street artists — from all over the world and from the neighborhood itself — to paint colorful, detailed images of birds that are threatened by climate change. The genesis of the project was last year when Avi Gitler, the owner of Gitler & _____ art gallery and a native of the adjacent Washington Heights neighborhood, decided that a mural project would help draw attention to his gallery. (He was right: The murals have been covered by The New York Times.) Gitler convinced his landlord, whose real estate firm manages dozens of storefronts in the neighborhood, to volunteer space for murals on some of his properties — from riot gates to stoops and apartment-building walls. Working with neighborhood store owners and partnering with Audubon, which raised money through an event hosted at a Harlem home, Gitler recruited the artists to start painting birds. 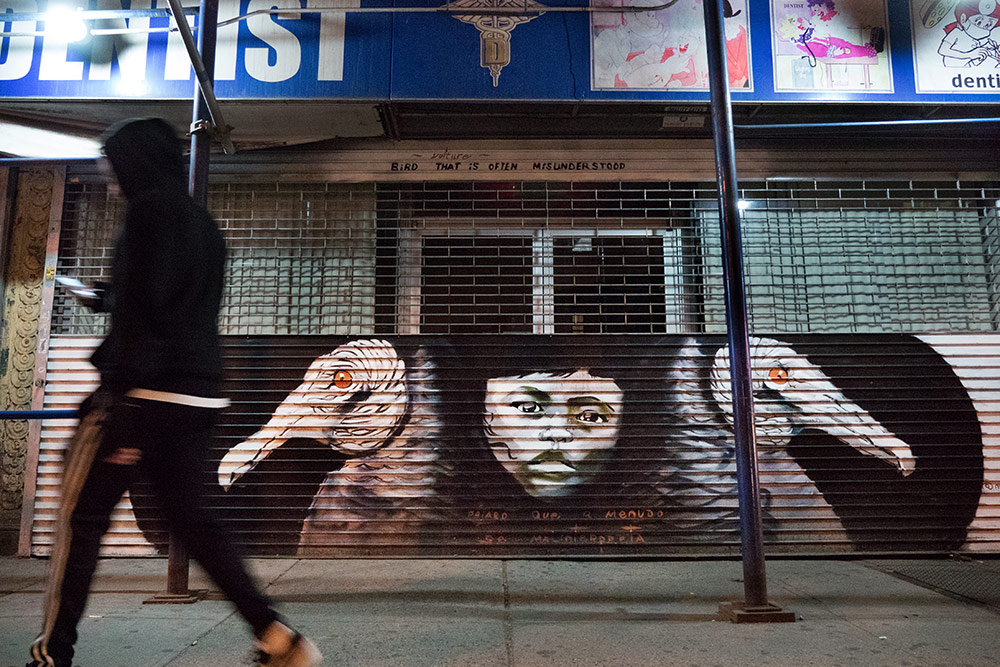 Bird habitats are widely threatened by the sea-level rise, extreme heat waves, storms, droughts, and desertification that climate change will cause. Audubon has a list of 314 North American bird species that are threatened or endangered by climate change. The group defines a “climate threatened” species as one that’s at risk of losing 50 percent of its current range by 2080, and a “climate endangered” one is at risk of losing 50 percent of its range by 2050.

The spraypaint street-art style, heavily influenced by graffiti, means these birds look nothing like your placid Audubon watercolors. The Tundra Swan (just below) and Bald Eagle (top) stare out with hardened expressions against backgrounds with colors as bright and artificial as cotton candy. 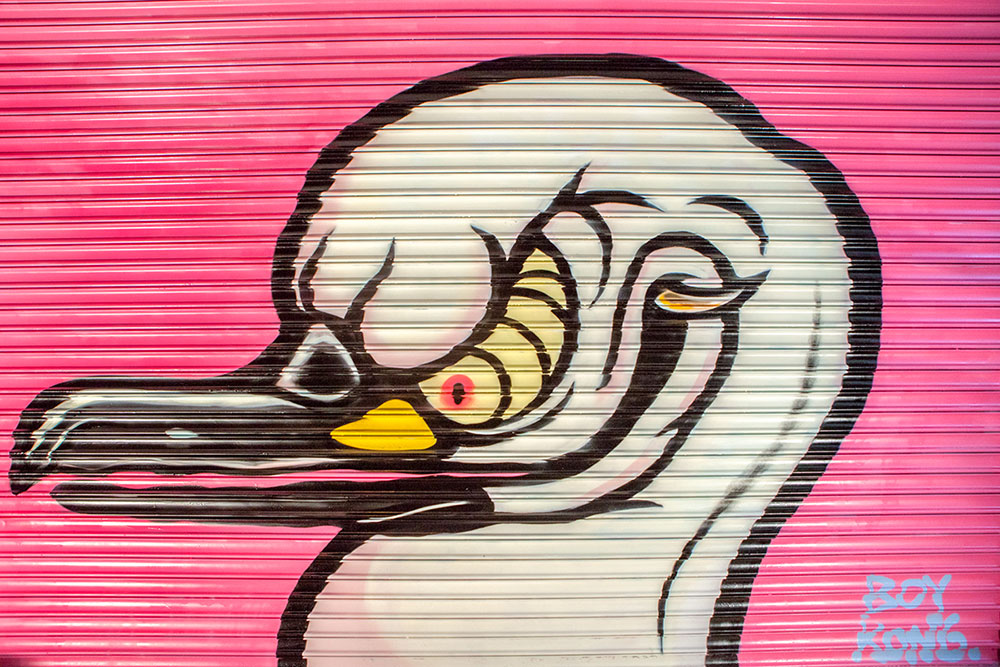 Hopefully John James Audubon, who lived and is buried six blocks away from Gitler’s gallery, would consider them an appropriate modern update. 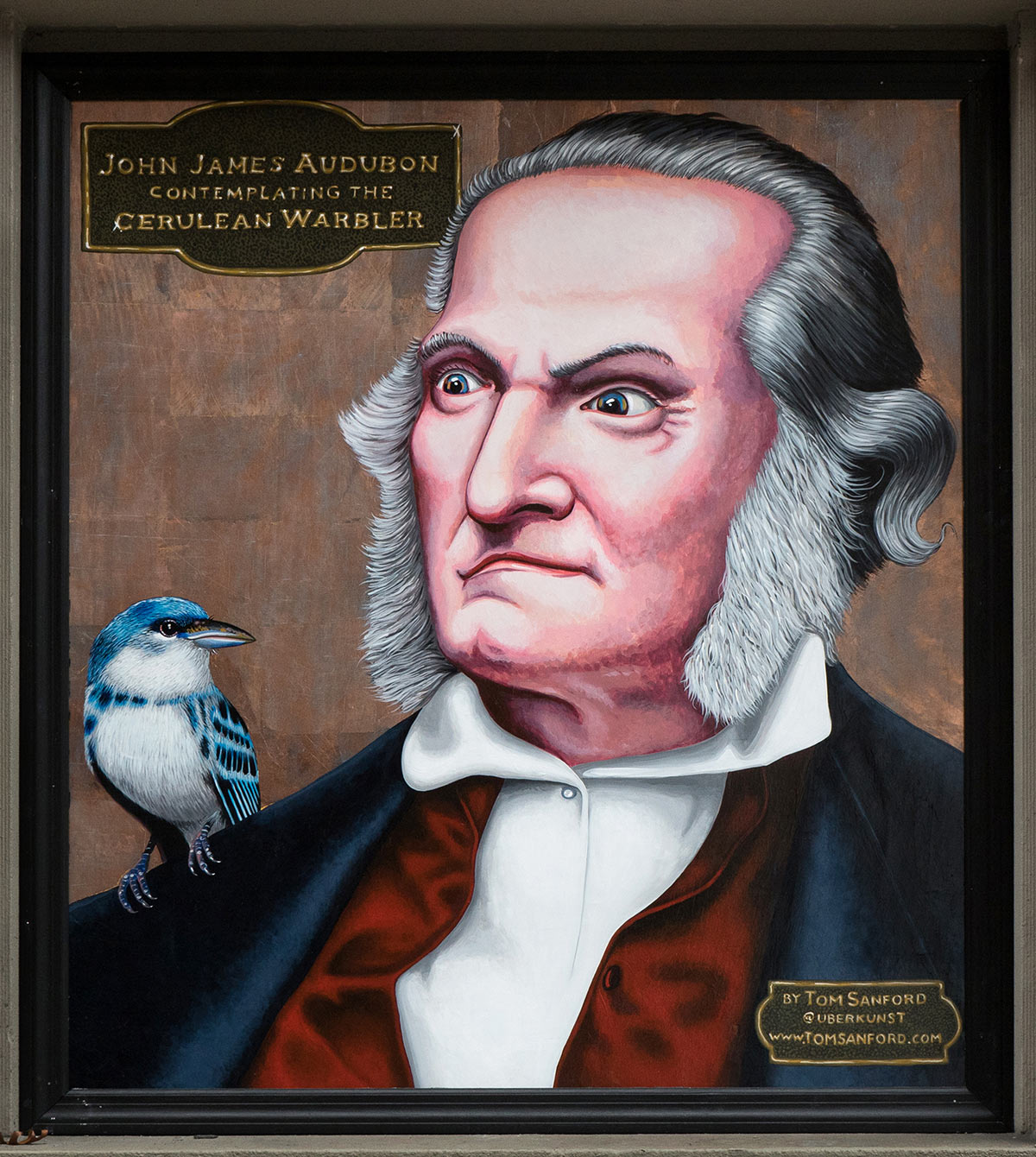 Right now, there are about a dozen murals in the vicinity of 149th Street and Broadway, and more are being added, spreading out further through the neighborhood. They seem to have been mostly well-received — graffiti writers haven’t painted over them — although the occasional passerby has rolled her eyes at the sort of beautification project that so often accompanies incipient gentrification. Neighborhood bars are getting involved too by offering cocktails named for and inspired by birds — like the Roseate Spoonbill, a concoction of tequila, Aperol, seltzer, and grapefruit juice.

You can only see the murals in person early in the morning or late in the day, when it’s light out but the stores are closed. But you can see photos of them right here. Click on each image to view a bigger version. 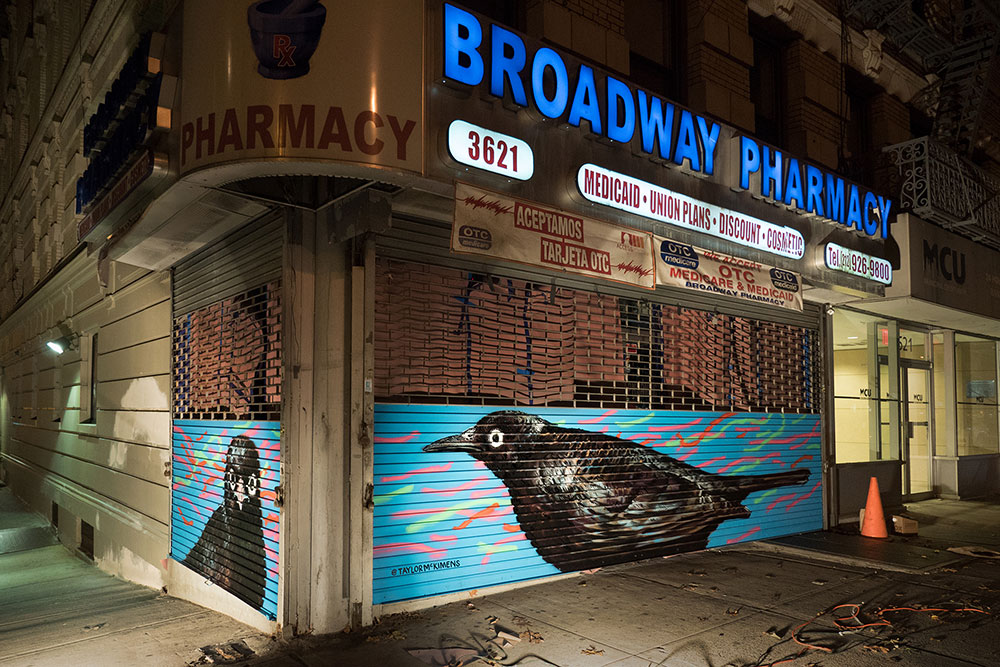 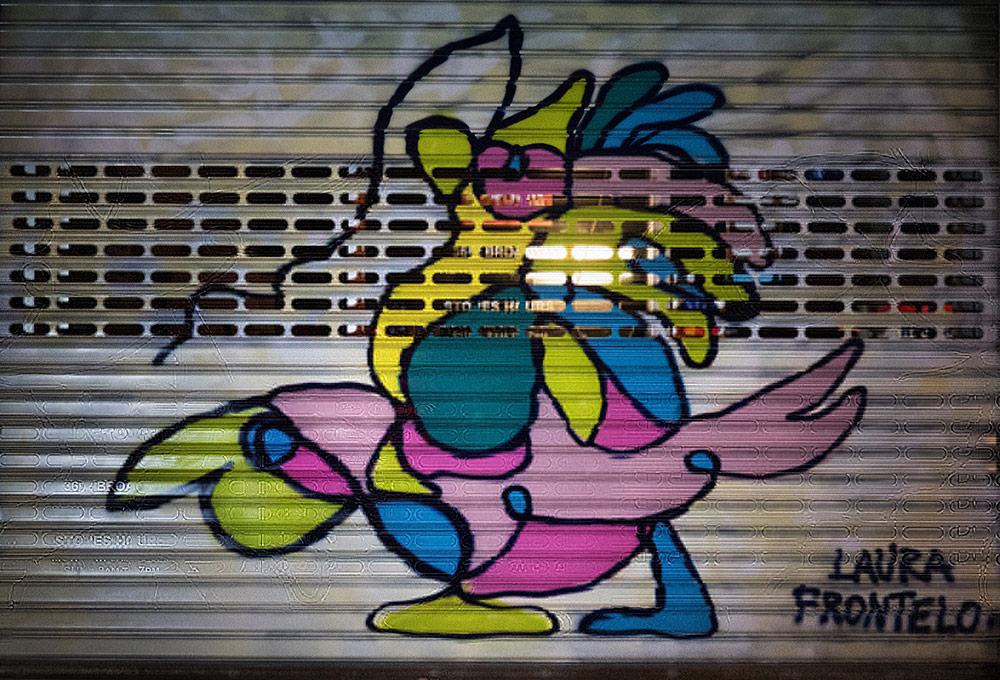 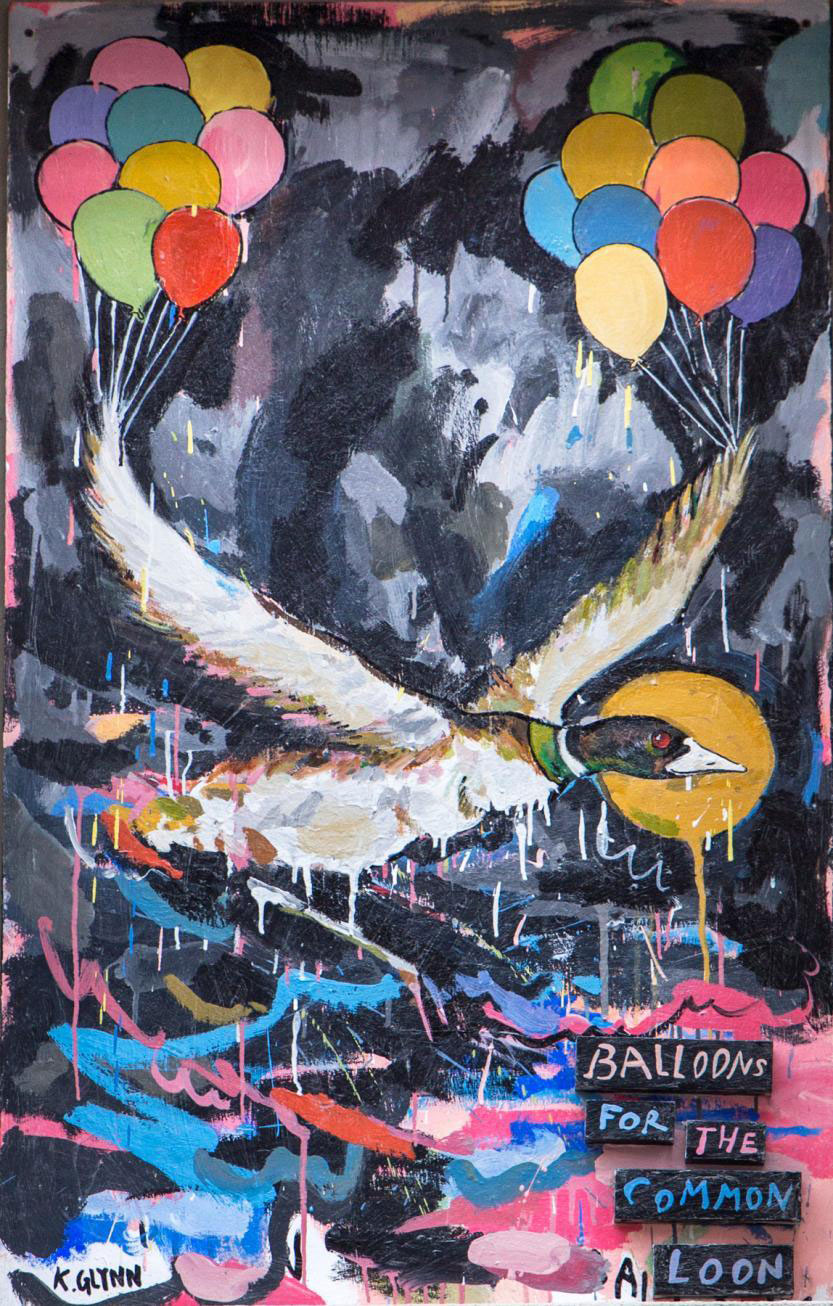 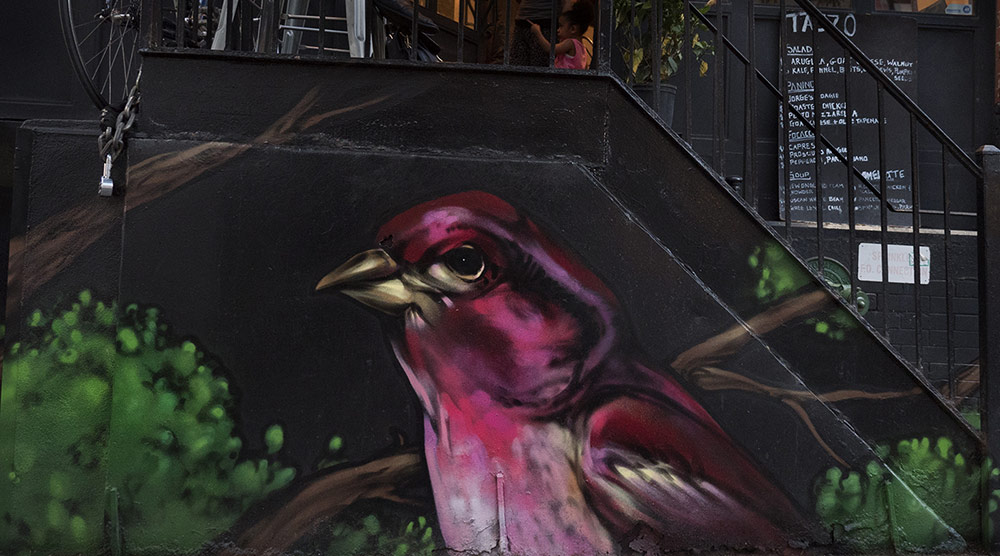 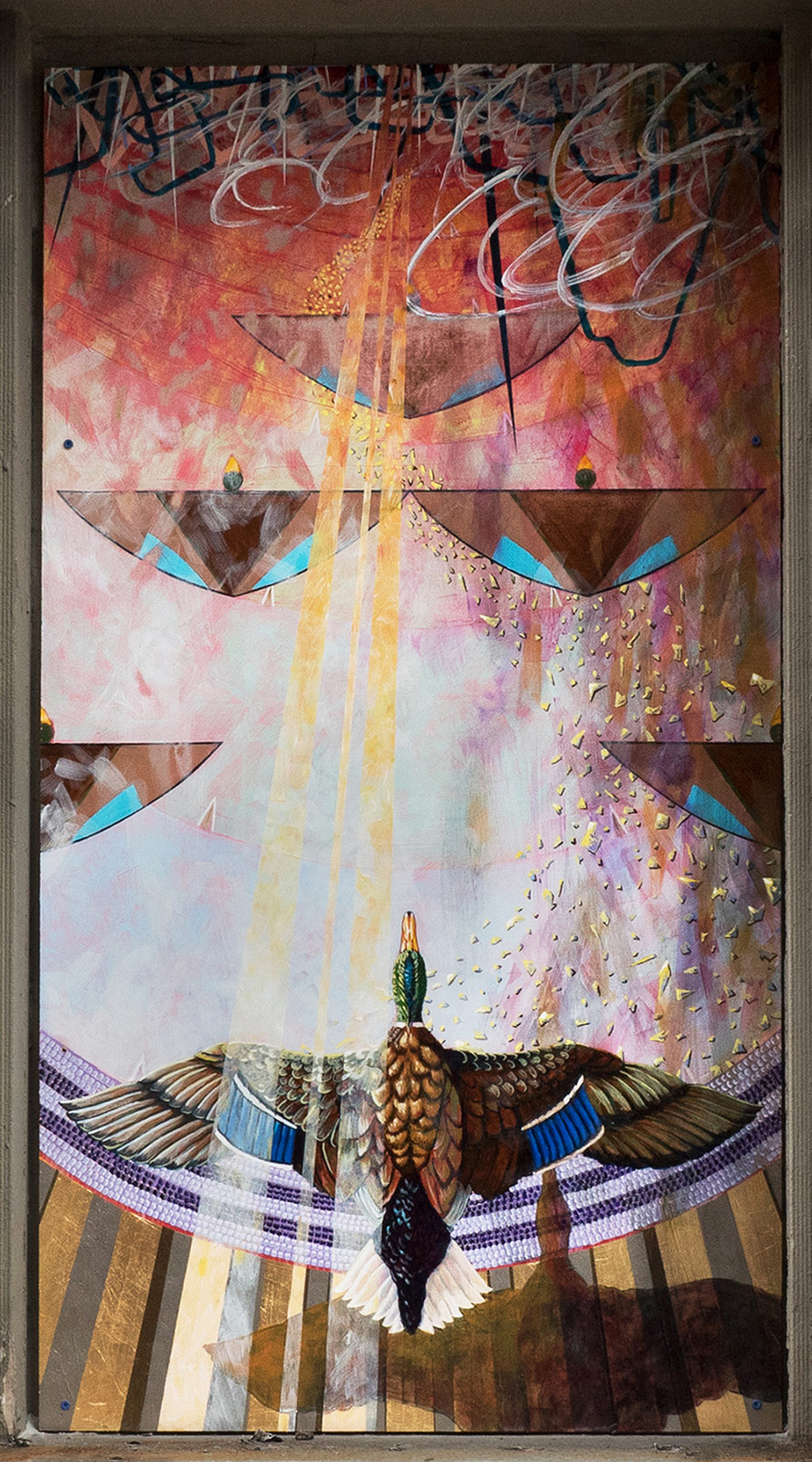 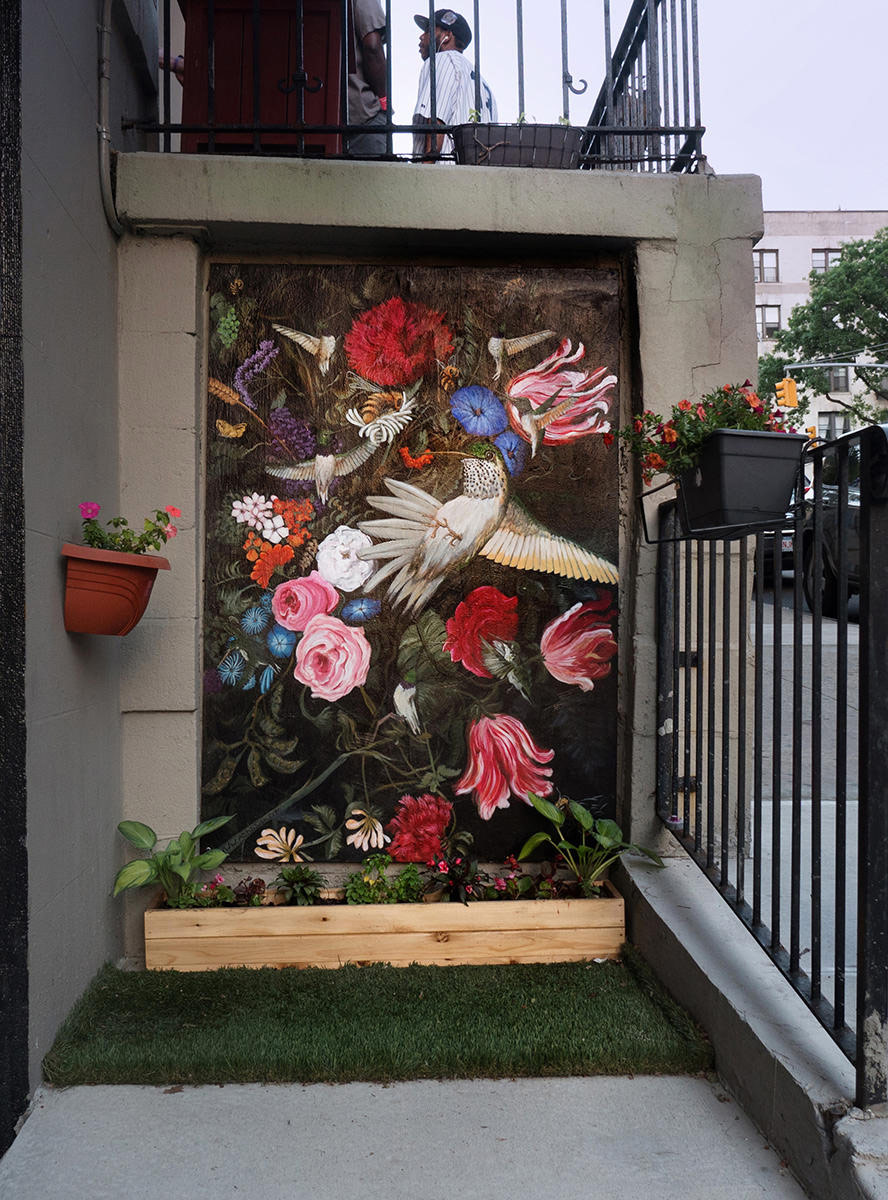 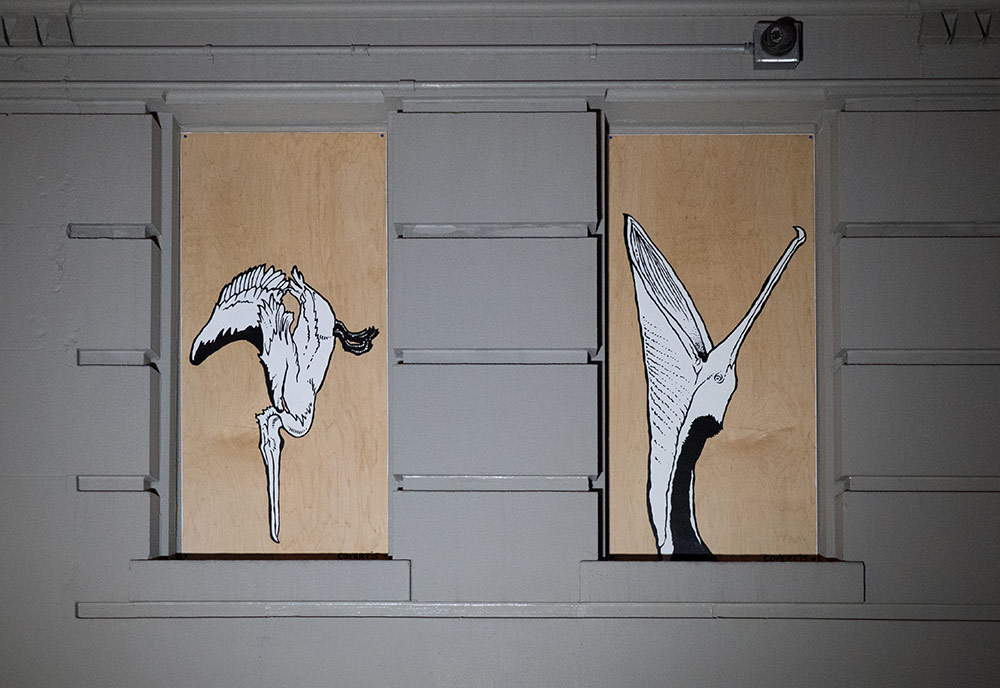 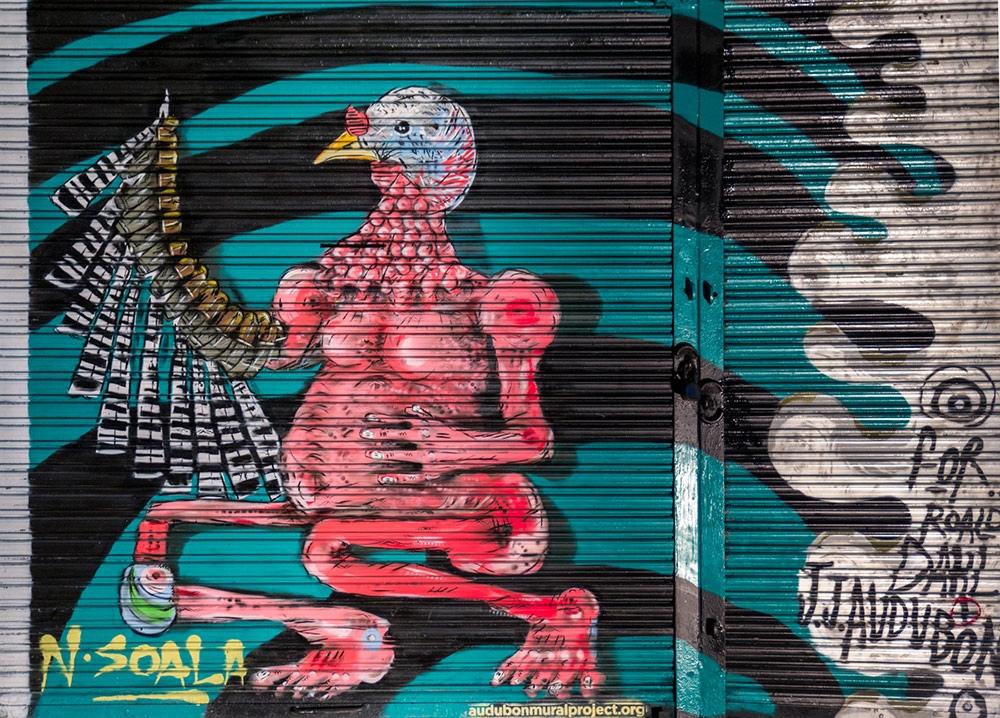 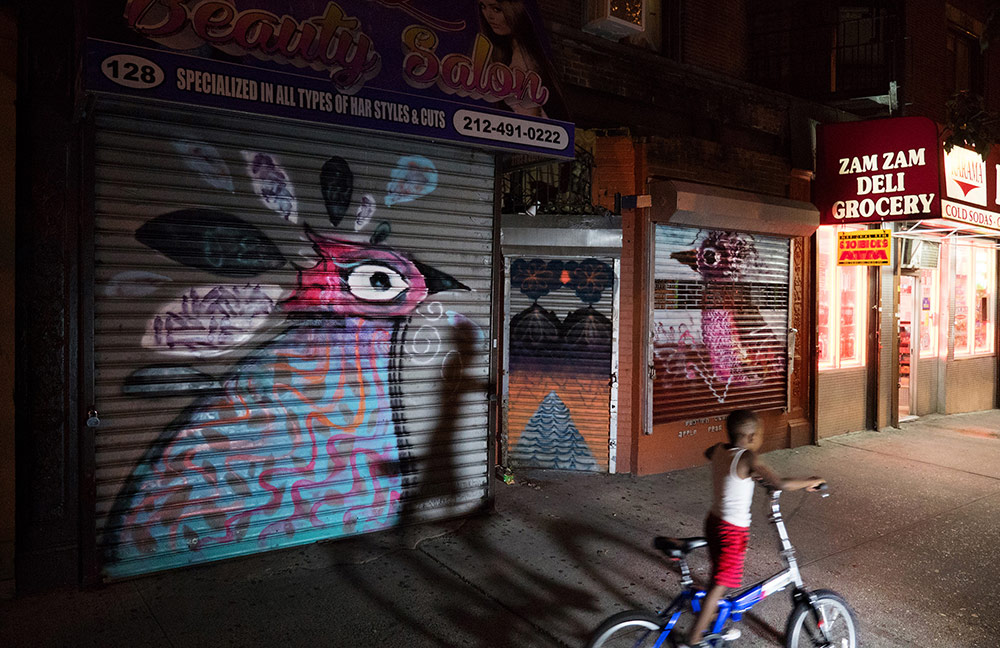